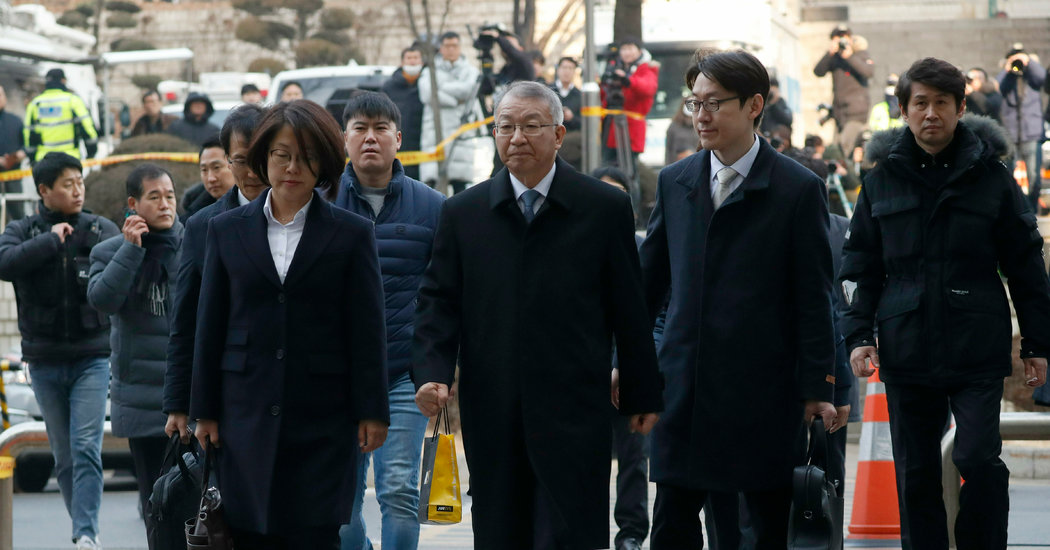 SEOUL, South Korea — A former chief justice of South Korea’s Supreme Court was arrested early Thursday on charges of conspiring with the nation’s disgraced former president to manipulate its ruling on a case that threatened to upset relations with Japan.

The ex-justice, Yang Sung-tae, 71, is the first former or sitting chief justice to be arrested on criminal charges in South Korea. He was taken into custody shortly after a court in Seoul, the capital, issued an arrest warrant early Thursday.

Mr. Yang’s arrest is expected to be followed by a formal indictment. Although Mr. Yang has vehemently denied all charges against him, prosecutors in South Korea seldom fail to indict criminal suspects they have arrested.

Mr. Yang, who served as chief justice from 2011 until 2017, is also accused of discriminating against judges considered unfriendly to his leadership and to the former and impeached president, Park Geun-hye, by influencing job postings and promotions.

Mr. Yang’s case carries international implications because of its connection to the growing diplomatic schism between South Korea and Japan, both important allies of the United States.

Relations between Seoul and Tokyo have plummeted to their worst point in years after the South Korean Supreme Court ruled last fall that Korean victims of forced labor before and during World War II had the right to seek damages from wartime employers, including Japanese industrial giants like Nippon Steel & Sumitomo Metal and Mitsubishi Heavy Industries.

Tokyo has fumed over the court’s order for Japanese companies to pay individual victims $88,000 to $133,000 in compensation. It argues that all claims arising from its colonial rule of Korea, from 1910 to 1945, had been settled in 1965 when it paid a lump sum of $300 million in economic aid as part of establishing diplomatic ties with Seoul.

South Korean plaintiffs have long accused Mr. Yang’s Supreme Court of delaying its final verdict on the cases or conspiring to overturn its 2012 opinion so as to not give Ms. Park a diplomatic headache with Japan.

In her last years in office, before she was ousted on corruption charges in March 2017, Ms. Park sought warmer ties with Tokyo, striking a deeply unpopular deal on so-called comfort women, or Korean sex slaves, for the Imperial Japanese Army.

Mr. Yang “runs the risk of destroying evidence” if he is not arrested, Myeong Jae-kwon, a judge at the Seoul Central District Court, said on Thursday while issuing an arrest warrant against Mr. Yang.

Judge Myeong said the prosecutors also presented a compelling argument for criminal charges against the accused, another requirement for an arrest warrant.

The case has rekindled South Koreans’ deep-seated misgivings about their judiciary’s independence and fairness. But it also sharpened an ideological divide in the society.

Outside the district court on Wednesday, while Judge Myeong was deliberating whether to issue an arrest warrant, rival activist groups engaged in shouting matches.

Labor and other progressive activists called for Mr. Yang’s arrest, claiming that reform is long overdue in the country’s deeply cloistered judiciary, which has long been accused of being too lenient on business tycoons convicted of bribery and other white-collar crimes.

But right-wing activists called Mr. Yang a victim of a politically motivated investigation, and accused Mr. Moon of using prosecutors to discredit conservative members of the judiciary. In the early 2000s, Mr. Moon worked briefly as a lawyer representing forced labor victims suing a Japanese company.

South Korea’s Defense Ministry accused Japan of committing a “clear provocation” when its military patrol plane made a low pass over a South Korean warship in the East Asia Sea on Wednesday.

It said Japanese planes have taken similarly threatening gestures toward South Korean Navy ships at least four times since last month and promised “strong” countermeasures if such acts were repeated.

Japan denied the claim, accusing South Korea of distorting facts, according to Japanese news reports that quoted officials in Tokyo.

Although South Korea and Japan remain important American allies, they have frequently argued over historical issues like Japan’s mobilization of comfort women.

Their mutual animosities have flared again, and not only over the South Korean Supreme Court’s rulings against Japanese companies. In December, Japan accused a South Korean Navy destroyer of locking its targeting radar onto a Japanese military patrol aircraft. South Korea denied it, and instead said that the Japanese plane flew dangerously low over its ship.