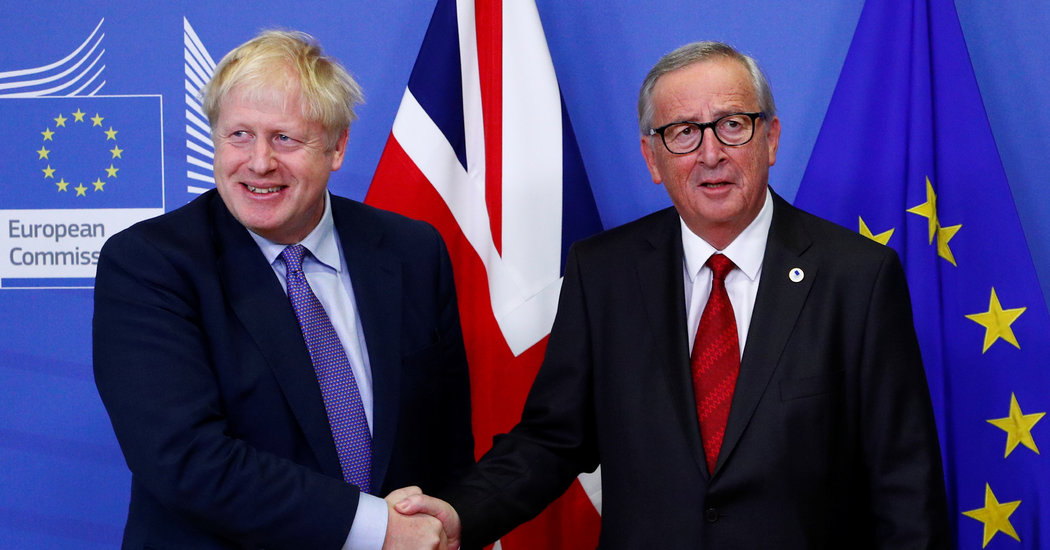 BRUSSELS — Breaking its own deadlines, reopening negotiations on a Brexit agreement with Britain it had said was sacrosanct and then approving a new version before it could be fully digested by its member states, the European Union showed considerable strategic flexibility on Thursday.

The Europeans got the better of the accord, most analysts agree, and remain eager to avoid a no-deal Brexit that would damage both parties. But what is evident now is that the European Union wants Britain to leave already, so it can move on to more pressing issues, from migration and enlargement to the contentious post-Brexit seven-year budget.

Before, there was the often-expressed hope, regularly articulated by European Council President Donald Tusk, whose term expires next month, that Britain might somehow remain in the European Union despite the 2016 referendum. But now the other 27 countries just seem to want the British gone.

“The Europeans have given up on Tusk’s notion of, ‘oh, let them stay,’” said Mujtaba Rahman, a former European Commission economist now at the Eurasia Group, a political risk consultancy. “There is no real strategy around the hope that a Labour government will emerge and have a second referendum.” The bloc, he said, is focused on preserving its own interests: “protecting peace in Ulster, protecting the single market and facilitating a smooth exit for Britain.”

Given Prime Minister Boris Johnson’s eagerness to reach a deal before Oct. 31, when he promised that Britain would leave the European Union one way or another, European negotiators moved remarkably quickly to adjust their offer, seeking to avoid being blamed for failure. They preserved their own key principles, including the need to show solidarity with Ireland and prevent a hard border between Northern Ireland and the Republic of Ireland.

“The E.U. showed a lot of patience,” said Agata Gostynska-Jakubowska, a Brussels-based analyst with the Center for European Reform. “It’s very rare that hours before the European Council starts, that individual states don’t even have a legal text. The deadline set for midnight Tuesday was supposed to be absolute, but the parties wanted to deliver on this. The objective is to move on.”

Brussels was happy to drop the idea of the so-called Irish backstop, the guarantee that there would be no hard border between Northern Ireland and the Republic of Ireland — a sticking point for Mr. Johnson and other Brexit supporters. But in the end, with Mr. Johnson’s concession that Northern Ireland would remain in the bloc’s customs union while legally remaining part of Britain, the distinction was largely semantic.

“The E.U. side knows perfectly well that this is a matter of window dressing, largely, for Boris Johnson and saw no great difficulty, because it did not require the E.U. to move any of its red lines,” said Michael Leigh, a former senior European Commission official. “This is an accommodation within U.K. factions; it doesn’t affect any real E.U. interests.”

Europe’s main goal, he added, was to avoid a no-deal Brexit. Though that option would damage Britain more, it would also hurt the European economy, which is already slowing.

“The E.U. is sick of this,” said Nathalie Tocci, director of the Rome-based Institute for International Affairs and an adviser to the bloc’s foreign policy chief. “But the E.U. is not the problematic side. They were firm and consistent, and ultimately the E.U. got its way in the way it had foreseen.” That meant forcing Britain to choose whether to keep the entire country in the customs union, as former Prime Minister Theresa May chose, or just Northern Ireland, as Mr. Johnson did.

Of course there are serious concerns that Mr. Johnson might fail to win approval for this withdrawal agreement on Saturday in the British Parliament, much as Mrs. May failed to win approval for her deal three times. “But despite their anxieties of ‘Here we go again,’ the E.U. was willing to try,” said Rosa Balfour, an analyst in Brussels with the German Marshall Fund. “They don’t want to be seen to be pulling the plug.”

If Mr. Johnson fails in Parliament and must request an extension beyond Oct. 31, as his Parliament has legislated, the European Union will provide one, Ms. Balfour said, presumably for a new election in Britain.

Even if Mr. Johnson succeeds, European leaders worry that he is not sincere about negotiating a future trade agreement that hinders him from cutting British corporate taxes and regulations. They fear he will turn Britain into what Chancellor Angela Merkel of Germany has called another competitor with the bloc, but one that is right next door.

But it is crucial now that the European Union move beyond Brexit to face a complicated world, said Enrico Letta, the dean of the Paris School of International Affairs and a former prime minister of Italy. Thursday’s summit was supposed to be devoted to finding an agreement on the bloc’s next budget and deciding whether to open negotiations with North Macedonia and Albania about joining the bloc, he said. The Syria crisis is important now, and “there needs to be a strong European position,” he said, especially when Vice President Mike Pence is in Ankara, the Turkish capital.

Migration issues are unresolved, and the new European Commission has been delayed in taking office by battles within the European Parliament, Mr. Letta said. “The risk is to focus everything on Brexit and lose focus on everything else.”

Mr. Rahman agreed. “Europe has a whole set of challenges to get on with,” he said. The new commission led by Ursula von der Leyen, who will succeed Jean-Claude Juncker, is supposed to be “a geopolitical commission, with the mandate about Europe’s place in the world — on trade, China, borders, the U.S., Russia — and less about internal matters.”

But it is difficult, he said, “when leaders are sucked into this internal dispute about losing a large member state, which adds no value to the European project.”

But of course the wrangling over Brexit may not be over, especially if Mr. Johnson loses in Parliament and calls an election that may not produce a working majority for him.

“The rest of the E.U. views the U.K. in a long-term process of meltdown,” Ms. Tocci said — all the more reason for Brussels to want Britain gone.