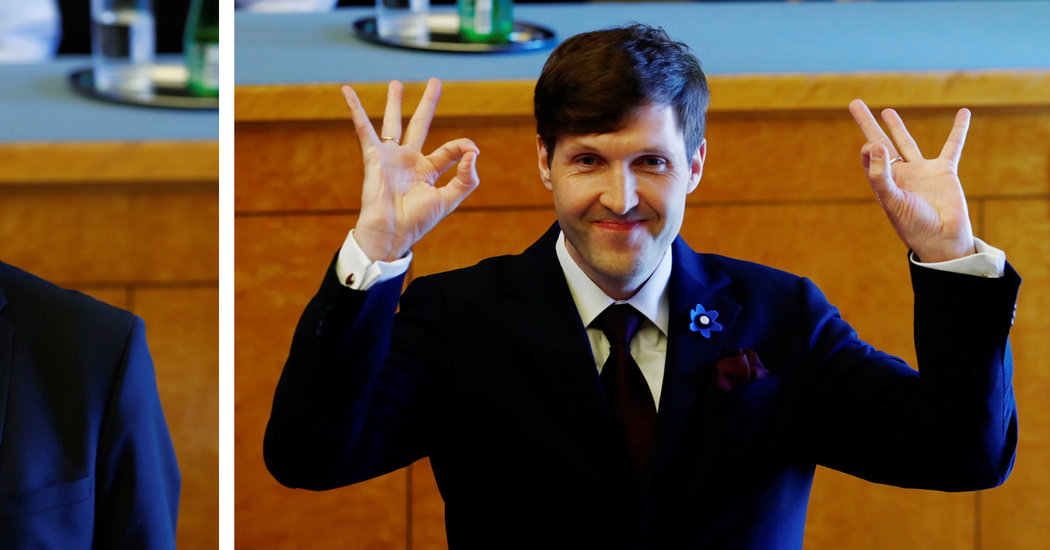 When Martin and Mart Helme were sworn in as lawmakers in the Estonian Parliament this week, they accompanied their broad grins with a gesture — making a circle with the thumb and index finger and holding the other three fingers outstretched.

To some, that would register as the fairly anodyne, universal signal for “O.K.” — understandable, given the celebratory mood.

But to others, the signs represented something much more sinister.

The Helmes — Mart is Martin’s father — are leading figures in the far-right Conservative People’s Party, or EKRE, which mined anti-immigrant feeling during elections in March to win 19 seats in Parliament, more than doubling its representation and earning it a place in Estonia’s coalition government.

Given that context, the gesture was interpreted as showing allegiance to the doctrine of white power, and it shocked many commentators.

Toomas Hendrik Ilves, the country’s former president, posted photographs on Twitter of the ministers giving the hand signals. “Estonian ministers of Finance and Internal Affairs, giving the white power sign at their swearing-in ceremony before Parliament today,” he wrote.

Carl Bildt, a Swedish former foreign minister, also expressed concern on Twitter, writing, “I get genuinely worried when I see this behavior by two members of the new government in Estonia.”

The appropriation of the “O.K.” gesture by white supremacists seems to have started in the United States. Organizations such as the Anti-Defamation League have linked it to a campaign by members of the anonymous online message board 4chan. In 2017, 4chan users were encouraged to post online claiming that the gesture represented the letters “W.P.” for “white power,” according to the league. The gesture has also been used by other nationalist, far-right and anti-immigrant activists, according to KnowYourMeme, a database of online trends.

In this internet age of viral memes and hidden signal, the gesture’s resonance does not seem to have been lost in Estonia.

“No one will tell us what words we can say or what signs we can make,” Martin Helme told Politico before the swearing-in ceremony on Monday. (Footage of the ceremony was available on the Estonian Parliament’s YouTube channel.)

Estonia is the northernmost of the three Baltic nations in northeastern Europe, all of which are members of the European Union. The success of the Conservative People’s Party in elections in March echoed a series of recent victories for anti-immigration parties elsewhere on the Continent.

Prime Minister Juri Ratas of the Estonian Center Party secured his second term after forming a coalition including the Conservative People’s Party, which is the second-largest group in the new governing alliance. The center-right Estonian Reform Party won most seats in the election but fell short of a majority and was unable to form a government.

The Conservative People’s Party were given five ministers in the new cabinet, including those for finance, which went to Mart Helme, the party’s leader; and for the interior, which went to Martin Helme. The coalition agreement contained a pledge not to refuse mandatory quotas for the settlement of migrants in the European Union, which went against a pledge by the rightist party during the campaign.

Still, the Conservative People’s Party new influence has prompted unease that has only increased further by the Helmes’ gestures.

A spokeswoman for the Estonian government said the issue was a matter for the party in question to comment on. The Conservative People’s Party did not immediately respond to a request for comment on Wednesday.

Historically, Estonians have usually been more exercised by suspicion of the country’s neighbor Russia, but the European migrant crisis gave nationalists a different fear to appeal to.

In 2013, Martin Helme said a large influx of migrants would lead to the “pillaging and raping” of Estonian towns, in remarks cited by ERR, Estonia’s public broadcaster. “And then we are told what racists we are and why we don’t get along with them,” he added.

It has been a rocky start to government for the Conservative People’s Party. As well as the gestures by the Helmes, another minister from the party, Marti Kuusik, was relieved of his duties on Tuesday after the police began an investigation into news reports linking him to domestic violence, Reuters reported.

Mr. Kuusik, who was the minister for foreign trade, has denied the accusations, calling them “slander,” ERR reported. “I am giving up the office of minister, not because the accusations against me are true, but, on the contrary, in order to focus on defending myself in the criminal proceedings and restoring my good name,” he said.