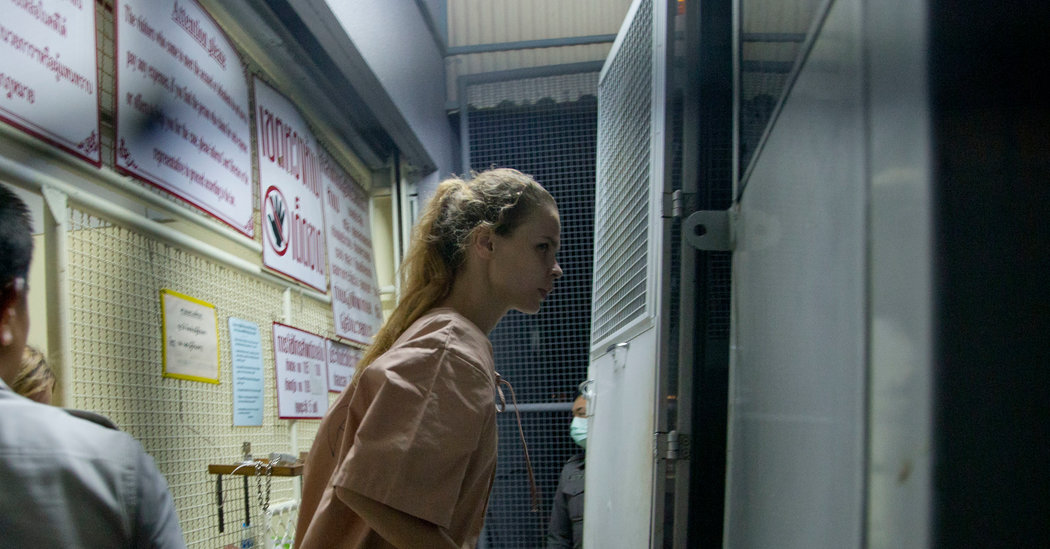 HONG KONG — A Belarusian escort who has spent nearly a year behind bars in Thailand after claiming to have audio recordings linking Russia with President Trump’s election will be deported on Thursday, a Thai immigration official said.

The escort, Anastasia Vashukevich, and seven others arrested with her pleaded guilty to charges of solicitation and conspiracy on Tuesday in the Pattaya Provincial Court. The court sentenced them to three years in prison but reduced their sentences to time served.

The defendants, who included five Russians and three Belarusians, had faced up to 10 years on charges of indecency, conspiracy and belonging to a secret society.

It remains unclear whether the damaging information that Ms. Vashukevich claimed to possess actually exists.

The guilty pleas appeared to close a chapter in the long-running drama involving a powerful Russian tycoon, a seduction plot and questions about the Kremlin’s interference in the 2016 United States election.

Ms. Vashukevich and Alexander Kirillov, the Belarusian man she calls her seduction coach, were arrested last February while conducting a seminar on seduction at a hotel in Pattaya, a city about 70 miles south of Bangkok that is notorious for its adult entertainment. Also arrested were several Russians attending the seminar.

As Ms. Vashukevich was being taken to jail that day in the back of a police truck, she posted a video of herself on Instagram saying she had information about Russian interference in the American presidential election.

She later said she had 16 hours of audio recordings that could help shed light on Russian meddling in the election and that she would hand them over to the United States in exchange for asylum.

Weeks before her arrest in Thailand, Ms. Vashukevich had come to public attention in Russia with the release of a video by Aleksei A. Navalny, a leading critic of the Russian president, Vladimir V. Putin.

The video included photos and audio recordings from Ms. Vashukevich that she took during a brief affair she had with Oleg V. Deripaska, the Russian aluminum tycoon, while working as an escort aboard his yacht in 2016.

Among them were photos of Mr. Deripaska and his guest, Sergei E. Prikhodko, then a deputy prime minister, and a recording of the two men talking about relations between the United States and Russia.

Mr. Deripaska has close ties with Mr. Putin and with Paul Manafort, Mr. Trump’s former campaign chairman. Mr. Deripaska is seeking to remove sanctions imposed by the United States on companies he controls, including the aluminum giant Rusal.

Ms. Vashukevich and Mr. Kirillov were initially arrested on visa and work permit charges. But prosecutors later brought the far more serious charges of indecency, conspiracy and belonging to a secret society.

They pleaded not guilty to the charges in August but changed their pleas this week as their trial was about to begin.

The Thai immigration chief, Surachate Hakparn, said Wednesday that the group had been transferred to the main detention center in Bangkok on Tuesday evening and that they would be deported Thursday afternoon.

They will not be allowed to return.

“We have entered into our system that they are banned from entering Thailand permanently,” he said. “They conducted bad things here.”

The group will be sent to their home countries, he said. They signed statements that they were returning home voluntarily.

After her arrest, Ms. Vashukevich expressed fear of deportation to Russia, where she had been living before traveling to Thailand.

“I am afraid to go back to Russia,” she said at the time. “Some strange things can happen.”