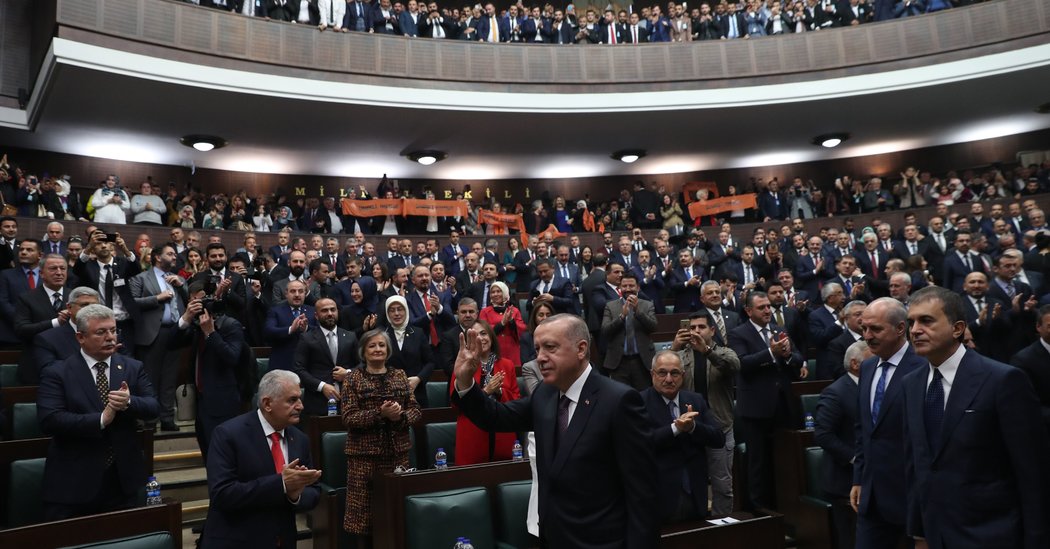 ISTANBUL — Just months after mounting a third military incursion into Syria, President Recep Tayyip Erdogan of Turkey is preparing another military intervention abroad, this time to dispatch troops to Libya.

He has arranged a special session of Parliament, where his party holds a majority, for Thursday to approve the plan, which will almost certainly pass.

The Libya gambit is no doubt the latest example of Turkey’s growing self-confidence as a regional power, analysts say. But some have begun to wonder why Mr. Erdogan is looking to get involved more deeply there now, pointing out that domestic politics are never far from his calculations.

Mr. Erdogan has long held an ambition for a kind of restoration of the Ottoman Empire, re-establishing Turkey’s position of leadership in the Muslim world with an expansive foreign policy. That aspiration is popular at home, and the mission in Libya, part of the former Ottoman domain, fits nearly into that vision.

His assertive foreign policy has given Mr. Erdogan a handy slate of challengers that he can point to abroad, helping him nurture nationalism and maintain his support at home, even as he aggressively pursues Turkish interests.

Six months after the loss of Istanbul in local elections — his most significant electoral setback in a 25-year political career — Mr. Erdogan, 65, is pondering holding general elections in 2020, according to some political analysts.

Although his term runs until 2023, his own slide in the polls and the splintering of his party are making him consider calling a snap election in the fall, Mehmet Ali Kulat, a political consultant and pollster in Ankara, said.

A faltering Turkish economy — anemic growth, a weakening currency and worrying inflation and joblessness — may only add urgency to the president’s considerations.

A speech Mr. Erdogan made to the Turkish diaspora in London in December sounded much like a campaign speech.

“Turkey is in reliable hands,” he told the gathering. “Today there is a much more powerful Turkey than 17 years ago. It is not a country that can be easily played. There is this determined Turkey now, setting the rules of the game in its region and also preventing plots.”

That assertive posturing has helped Mr. Erdogan stir up nationalist feelings over foreign enemies and rally his core supporters, Ali Bayramoglu, who was close to Mr. Erdogan’s party in its early years, said. It is also typical of the combative style that Mr. Erdogan is known for.

“Our right-wing parties did not use to act like they did not care about the United States,” Mr. Bayramoglu said. “This independence, this challenging is a new thing. Turkish right-wing voters love it.”

With some justification Mr. Erdogan has argued that he has security interests in both Iraq and Syria, since Turkey shares a long border with both and has suffered from instability spilling over from their conflicts. With Libya he has made similar arguments, as well as historical ones.

Mr. Erdogan pointed out last week that Libya was the last of the Ottoman territories to be lost and that Turkey’s founder, Mustafa Kemal Ataturk, fought and was wounded there as a young officer.

“It’s not difficult to convince Turkish public about the need for an intervention in Libya in part because of the Ottoman legacy,” Asli Aydintasbas, a senior fellow of the European Council for Human Rights, said in written comments.

But there are Turkish interests at stake, too. Beneath Mr. Erdogan’s agreement with Libya is a desire to position Turkey to explore for oil and gas exploration in the eastern Mediterranean, off the coast of Cyprus, in competition with Greece, Cyprus, Egypt and Israel, analysts say.

“Turkey does not want to be frozen out of the great game which revolves around the hydrocarbon deposits in the Eastern Mediterranean,” Ms. Aydintasbas said.

As in Syria, Turkey wants to have troops on the ground in Libya in order to gain a place at the table, she said.

Turkish-backed Syrian proxy fighters have already arrived in Libya, and more have assembled in training camps in Turkey ahead of deployment, according the Syrian Observatory for Human Rights, an independent monitoring organization.

The moves follow increased support this summer by Mr. Erdogan to Libya’s Government of National Accord, headed by Prime Minister Fayez Al-Sarraj.

Turkey sent military advisers, arms and a fleet of 20 drones to defend Tripoli from attack by the forces of Gen. Khalifa Hifter, who controls much of eastern Libya and is backed by Saudi Arabia, the United Arab Emirates and Egypt.

Turkish assistance under the new agreement will stretch to training and capacity building, a recent paper by the European Council for Foreign Relations reported.

“It now appears that Turkey will not only defend the G.N.A. but influence their future security setup,” it said.

Turkey has already signed an agreement for an exclusive economic area with the Tripoli government. If the Libyan government falls, the agreement would fall with it.

So Mr. Erdogan is trying to protect that agreement, said Ozgur Unluhisarcikli, director in Ankara of the German Marshall Fund of the United States.

Turkey has already started its own exploration drilling off northern Cyprus, which was punished with sanctions last year from the European Union.

Even if it found gas, Turkey would struggle to exploit any discoveries because of the threat of further European sanctions, Mr. Unluhisarcikli said.

So Mr. Erdogan’s actions were for now mostly aimed at disrupting the activities of his opponents, he added.

But Mr. Erdogan’s ever more aggressive angling has unnerved his neighbors, especially in Greece, who now openly worry about confrontation.

Diplomats in Athens and Brussels said that the situation was the most tense it has been in more than two decades, since 1996 when the two neighbors exchanged fire in the Aegean.

Under pressure, Prime Minister Kyriakos Mitsotakis of Greece is poised to change decades of foreign policy, announcing on Sunday that he was prepared to take Turkey to international arbitration at the International Court of Justice in The Hague.

But diplomats in Brussels readily admit that there is only so far they can press Turkey, considering how desperately they depend on Mr. Erdogan to control the flow of migrants to Europe, which was destabilized by the arrival of more than a million asylum seekers in 2015.

Now, Mr. Erdogan faces the possibility of a new refugee crisis coming from Syria, where Russian and Syrian government forces have redoubled their offensive in Idlib, the last rebel-held province.

Seeking leverage from the potential for a crisis as Chancellor Angela Merkel of Germany prepares to visit Turkey this month, Mr. Erdogan has warned that he will be forced to open the gates for the refugees to enter Europe again.

Elsewhere, Mr. Erdogan’s flirtation with Russia has stirred American and European ire. So has his foray into Syria, despite President Trump’s apparent green light for it. Typically, Mr. Erdogan is having none of it.

“Of course, everyone is giving advice to us: ‘What are you doing in Syria?’ they say. ‘When will you leave Syria?’” Mr. Erdogan said in London.

Mr. Trump has so far not acted on attempts by Congress to punish Turkey for its purchase of the Russian S400 missile system and for violating United States sanctions against Iran.

That has not stopped Mr. Erdogan from threatening to close off United States access to Turkish bases, including Incirlik Air Base, which houses roughly 50 American tactical nuclear weapons.

Mr. Erdogan has also remained loyal to the Arab Spring uprisings since they began in 2011, placing him at odds with longstanding dictators in Egypt, Tunisia and Libya, as well as the United States.

Even as other Western nations ceased support when extremists took over the uprisings or, as in the case of Egypt, a counterrevolution ousted the elected Islamist government, Turkey supported the Islamist-leaning groups that emerged from the uprisings.

In Libya, Turkey backed rebel groups based out of Tripoli and Misurata from the start of the uprising.

That support has developed into a regional stance, in alliance with the wealthy Gulf state of Qatar, against Saudi Arabia, Egypt and the United Arab Emirates.

Those groupings back opposing proxy forces in Libya and Syria and represent a new fault-line in the Middle East. Mr. Erdogan is determined to lead his camp.

“Today there is a Turkey with an independent foreign policy, making operations for its own national security without looking for permission from anyone,” he said in London.