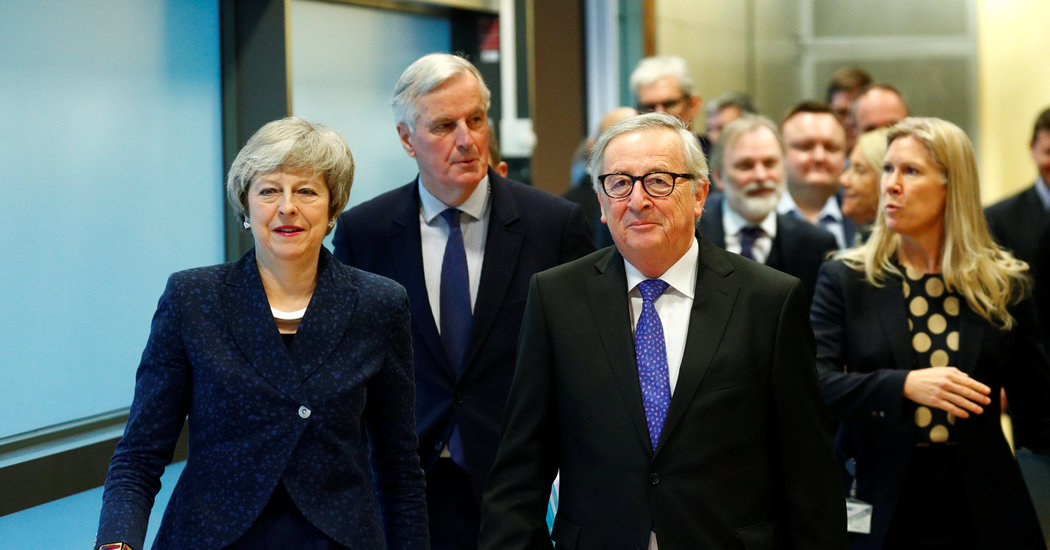 BRUSSELS — Prime Minister Theresa May of Britain had what was described as a “robust but constructive” talk with the president of the European Commission, Jean-Claude Juncker, as her visit to Brussels on Thursday got off to a polite but cool beginning.

And as the talks came to a predictably inconclusive conclusion, a growing list of recent ominous economic developments was punctuated by a report from the Bank of England that Britain faced its slowest growth in 10 years in 2019. The bank’s governor spoke of tensions caused by the “fog of Brexit,” the country’s increasingly chaotic withdrawal from the European Union.

Mrs. May made the trip to make what was widely regarded as an unrealistic demand to reopen the withdrawal agreement that she negotiated with Brussels, and which lays out a managed exit on March 29. She needs help from the bloc because the agreement has been rejected overwhelmingly by the British Parliament.

The sticking point in the agreement, as it has been for the better part of two years of negotiations, was the immensely unpopular “backstop” — an arrangement to guarantee that there will be no hard border on the island of Ireland between Britain and the European Union. It is anathema to pro-Brexit forces because it would keep Britain in the European Union’s customs union indefinitely, preventing it from making trade deals with other countries.

Yet, as he and other European leaders have told her many times before, Mr. Juncker told Mrs. May that the 585-page withdrawal agreement could not be reopened and the backstop could neither be eliminated nor made time-limited.

But according to a joint statement after their talks, Mrs. May and Mr. Juncker agreed that both sides would keep talking about how to reassure the British Parliament about the backstop and that they would meet again by the end of this month.

Mr. Juncker said he was willing to add wording to the nonbinding political declaration negotiated alongside the withdrawal agreement that lays out the principles of a future relationship between Britain and the European Union.

According to the statement, the wording would be intended “to be more ambitious in terms of content and speed when it comes to the future relationship between the European Union and the U.K.”

The withdrawal agreement calls for two years of negotiations on a future relationship, with the option of a third year, during which little would change. But if no deal were done by then, the backstop would kick in.

Mr. Juncker, who believes that the backstop is actually favorable to Britain, is apparently offering commitments to finish a future relationship in good time so that the backstop is never needed. He has previously talked of wording to make it clear that Brussels dislikes the backstop, too, and would endeavor to ensure that if triggered, it would not last long.

Margaritis Schinas, Mr. Juncker’s spokesman, said that Mrs. May had “raised various options” for getting around the backstop arrangement, but he provided no details. European Union negotiators have said that they can work to have most customs checks in ships and factories, not on the border itself, but that no technical fix was currently available to remove the need for the backstop.

Analysts scoffed at the notion that Mrs. May could present some new, paradigm-shifting proposal that might propel the negotiations forward.

“Theresa May has said she is looking for new ideas, but doing so 50 days before the deadline when you have had almost 1,000 days to negotiate is not credible,” said Simon Fraser, former head of Britain’s foreign office, now managing partner at Flint Global, a consultancy.

Most European officials believe that the risks of leaving without ratifying a withdrawal agreement — known as “no-deal Brexit” — are higher for Britain than for continental Europe and that if Mrs. May were to pursue that course, Parliament would step in, seize control of the process and seek to postpone the exit date. So they have every incentive to let things play out in London first before making their move.

“I don’t think they will give her anything until they know clearly what her proposal is,” Mr. Fraser said. “They will want to give once and they will only want to give when it is clear that it is going to solve the problem, and none of those three conditions are so far satisfied.”

Certainly there was little sign of movement on Wednesday, when both Donald Tusk, president of the European Council, and Leo Varadkar, the Irish prime minister, restated their commitment to the backstop.

Some Brexit supporters in London see the frustration expressed in Mr. Tusk’s comments as a vindication of their strategy of keeping the threat of a no-deal Brexit on the table. Only the pressure of that prospect could persuade Brussels to offer concessions, they argue.

But the British economy is paying a price as Brexit uncertainty contributes to a growing gloom. Earlier in the week Nissan, which produces around 475,000 vehicles annually in Britain, said it was canceling plans to build a sport utility vehicle there and leaving the production in Japan. Brexit was seen as a part of the reason, along with the declining demand for diesel engines.

The Financial Times reported Wednesday that the government had told some business leaders that Britain was yet to replicate many of the time-consuming trade deals negotiated by the European Union, and would not be able to do so by the Brexit deadline of March 29. So even if Mrs. May’s deal were approved by Parliament later this month, Britain’s access to deals with large trading partners such as Canada and South Korea would still be in doubt.

Back in Westminster, the political chess game surrounding Brexit was in full swing, with the opposition leader, Jeremy Corbyn, laying down fresh terms for helping to get Mrs. May’s Brexit deal through Parliament.

In a letter to the prime minister, Mr. Corbyn called for a permanent customs union with the European Union and “close alignment” with its single market, including agreement that Britain would keep pace with new changes to rights and protections as they are put in place by the bloc. To the Brexitologists, his use of the word “alignment” was significant, representing a softening of Labour’s previous tests for supporting Brexit.

However, Mrs. May is deemed extremely unlikely to embrace Mr. Corbyn’s new plan, as it would infuriate pro-Brexit hard-liners and split her Conservative Party — the one thing above all that she does not want to happen on her watch.

Nonetheless, in raising the possibility of plan for a softer Brexit, under which Britain would keep close ties to the European Union rather like Norway, Mr. Corbyn angered those of his lawmakers who favor scrapping Brexit altogether by holding a second referendum.

They have little trust in Mr. Corbyn, who is a lifelong critic of the European Union. In light of that, some analysts say that the Labour leader may be seeking to a way for some of his lawmakers to justify supporting a government Brexit plan.