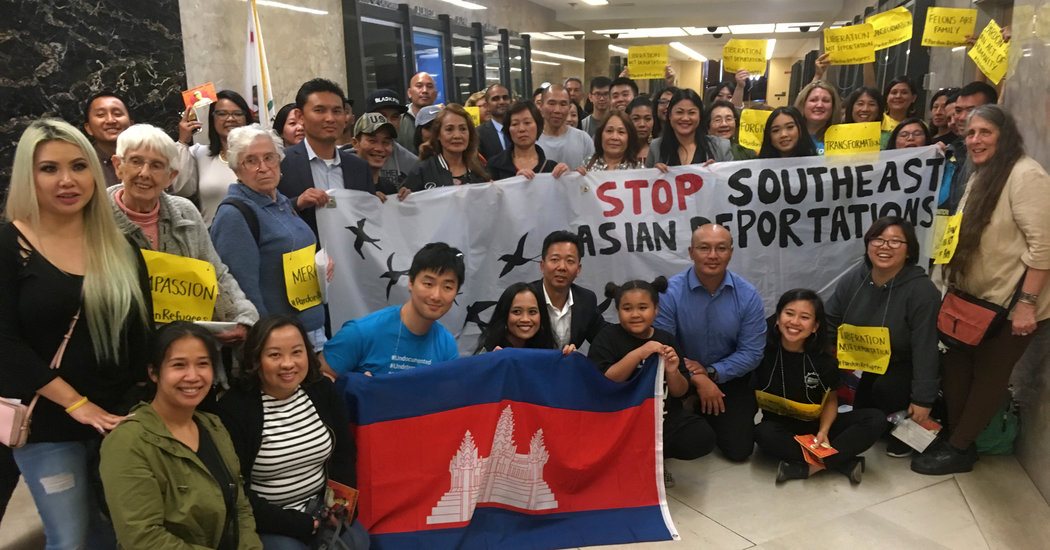 PHNOM PENH, Cambodia — The Trump administration is preparing to deport the largest group yet of legal Cambodian immigrants to the United States over the next few days, according to human rights groups and an American official, continuing a wave of deportation that has fallen heavily on refugees who fled the upheaval surrounding the Vietnam War.

The new deportations include an expected 46 people who are scheduled to arrive in Cambodia on Dec. 19, the American official said. The official spoke on condition of anonymity to discuss details of deportations that had not been officially announced.

Many of those being deported have few or no memories of Cambodia, as they were part of an exodus fleeing Khmer Rouge massacres and were granted refugee status in the United States. Some actually have green cards and have been convicted of a felony while in the United States, though often from many years ago.

“We are expecting more than 40 later this month,” Bill Herod, the founder of the Khmer Vulnerability Aid Organization, a Phnom Penh-based group that works to integrate Cambodian deportees into the country, said in an interview. Mr. Herod said that the exact number and arrival date of deportees often changes due to variables including last-minute legal challenges and weather complications.

President Trump has continued to place harsh limits on immigration and asylum at the center of his national policy, and over the past year, the White House has pushed to greatly expand the number of foreign residents of the United States who are eligible for deportation.

That effort has included what American officials describe as a renewed push by the White House this month to negotiate with Vietnam to take back a category of refugees in the United States — those who immigrated before 1995 — who had been considered protected under an earlier agreement.

In the case of Cambodians living in the United States, some deportations began in 2002 under a bilateral agreement signed by both countries. But the Trump White House has greatly stepped up the process, widening the numbers of Cambodians it considers deportable.

Rights groups have criticized the new deportation push because many of those designated for deportation will be separated from families who remain in the United States. Others are the children of Cambodians who fled torture and massacre by the Khmer Rouge regime and are being returned to a developing country in which they have never lived or of which they have little memory.

[Read here about the experience of Cambodian deportees who have struggled to find new lives in a home country entirely foreign to them.]

During the Vietnam War, the United States secretly bombarded Cambodia and dropped 2.7 million tons of explosives on the country in operations that some credit with partially enabling the Khmer Rouge’s rise to power.

“Virtually all are the children of Khmer Rouge refugees,” Mr. Herod said of those being deported from the United States. “Virtually all have a difficult time adjusting.”

Cambodia’s government began resisting the push for more deportations in 2017, citing human rights concerns and expressing an interest in negotiating a new agreement.

The Trump administration responded by classifying Cambodia as “recalcitrant” and imposing visa sanctions on some high-ranking government officials and their families. The American and Cambodian governments reached an agreement to resume deportations in February, and Cambodia has since accepted its nationals in increased numbers.

Mr. Herod, of the Khmer Vulnerability Aid Organization, said that American officials alerted him in December 2017 “to prepare to receive 200 new arrivals each year for the next several years.”

Only 74 and 29 Cambodians were deported in 2016 and 2017, respectively, according to I.C.E. reports. Mr. Herod said he was aware of 94 Cambodians who had already been deported this year.