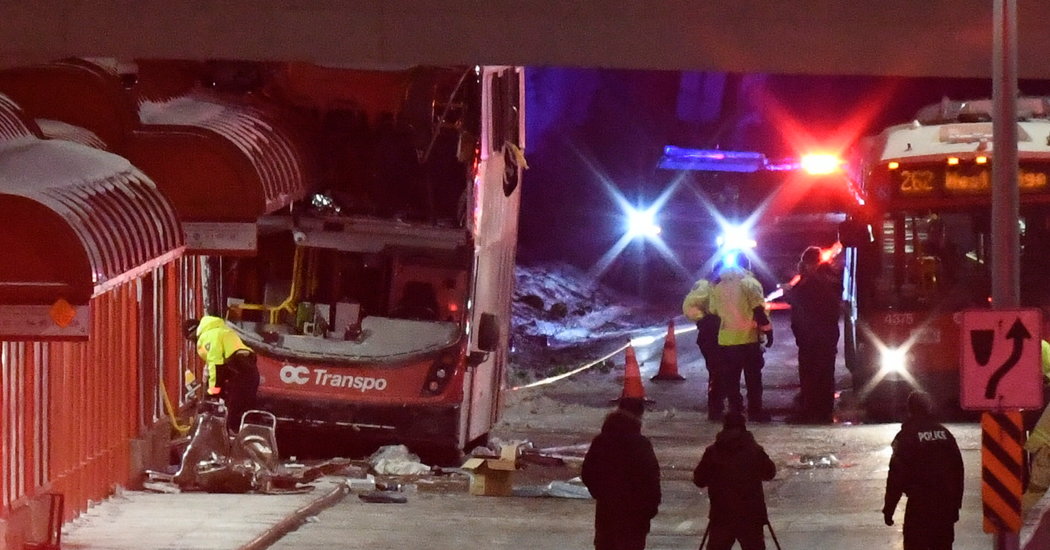 Jim Watson, the mayor of Ottawa, said that one victim was standing on the platform at the time of the collision, and the other two were aboard the bus.

“Our hearts and condolences go out to all those who were injured,” Mr. Watson said at a news conference. “Our focus now must be to provide care and sympathy for those affected by the accident.”

Of the injured, 14 arrived at hospitals in critical condition.

It was the second deadly accident involving a double-decker bus in the city in less than six years.

The bus, operated by the city’s transit system, OC Transpo, was traveling along a below-grade road reserved for buses when it lost control entering a station west of the city’s downtown at about 3:50 p.m., said Chief Charles Bordeleau of the Ottawa Police Service.

It then mounted a passenger platform and crashed into a shelter. The steel and glass of the shelter’s overhang tore off the front of the bus, and sliced through a large section of its upper deck.

Chief Bordeleau said that most of the injured people were in that part of the bus, and that several people on the platform also required treatment.

Why the bus lost control was not clear. It was a bitterly cold afternoon: Officials had delivered a frostbite warning and black ice had developed on several roads throughout the city.

“There’s no question that the weather adds to the complexity of the scene,” Chief Bordeleau said, although he declined to answer questions about the possible causes or the condition of the transit road’s service.

He said that “something led us to having arrested” the bus driver, but he declined to offer any details. She was being questioned on Friday night.

The bus, whose route was to take it from downtown to the suburbs, was not scheduled to stop at the station where the collision occurred, and merely meant to pass through it.

Doug Ford, the premier of Ontario, wrote on Twitter that he was “devastated to hear about those who lost their lives and were injured following the horrific bus collision.”

An investigation by federal authorities found that the driver may have been distracted by a video screen that allowed him to monitor passengers on the upper level of the bus. It also called for the addition of bumpers to the buses, which are made in Britain.

John Manconi, the general manager of OC Transpo, said buses built since that report have included bumpers, but he did know whether the bus in Friday’s collision was among them.