Do You Honestly Find Spas Kind of Boring? 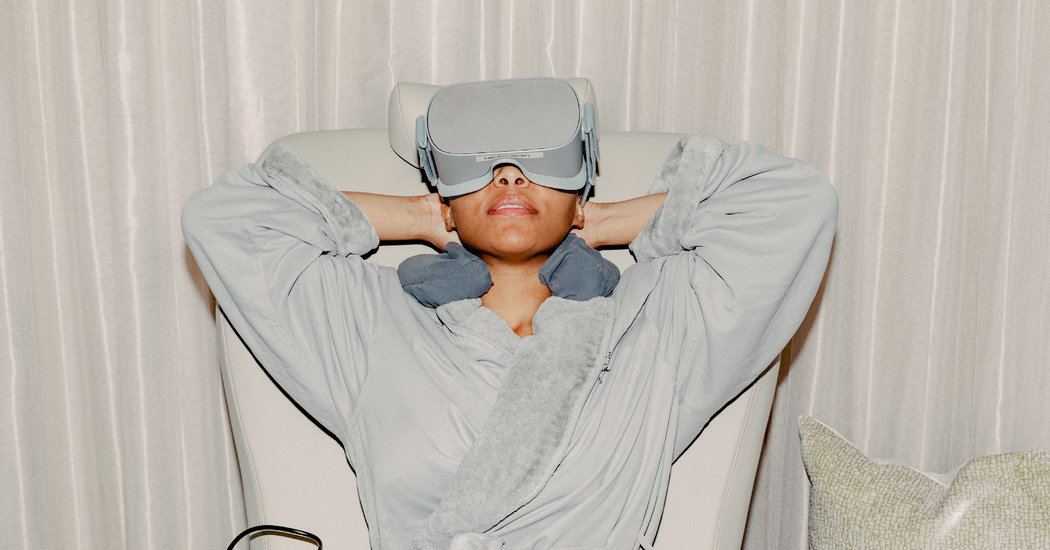 The new Kohler Waters Spa in Chicago is on a bustling street in the Lincoln Park neighborhood. But once inside, clients can find themselves a spot on a private beach, along a quiet mountainside or even inside a dark, comforting cave.

It was perhaps only a matter of time before virtual reality was elevated from the gamer’s basement to the marble-lined, lavender-infused realm of luxury self-care.

“Wellness has become a huge marketing term to attract those guests who want to not just have a beauty result at the end of their service, but want to feel relaxed, calm and now, increasingly so, de-stressed,” said Patricia Heitz, a spa consultant in Delmar, N.Y. Virtual reality, she said, is “taking that wellness service to the next level by transporting the guest to a place of inner peace and calm.”

People receiving pedicures have long read fashion and gossip magazines — or, more recently, poked at their phones. But while clients at Kohler stare off into a “sunset,” “waterfall” or relaxing scene of their choice, they also get to choose a meditation to accompany the view as they chill out in massage chairs and get their nails buffed.

And some spas are offering V.R. as a treatment unto itself.

At G20 Spa & Salon in Boston, customers pay $45 for a 30-minute guided virtual meditation. They pop on a V.R. headset while sitting in a reclining chair and choose a guided meditation along with an “environment,” like the Northern Lights or a forest.

“It’s gaining popularity,” said William Engvall, the assistant spa director at G20, where the V.R. meditation has been on the menu since 2018. An average of five to 10 people a week visit the spa specifically for the guided V.R. meditation, he said.

A similar setup awaits visitors to Esqapes Immersive Relaxation, a V.R. meditation center in a Los Angeles office building, where clients can visit a “garden,” a “desert,” a “Moroccan resort” or “snowbank cabin” while sitting in a massage chair ($45 for 30 minutes).

“V.R. and the extrasensory components are a key component of the treatment,” said Micah Jackson, the C.E.O. of Esqapes. Giving the mind something to focus on, rather than letting it wander freely, is one of the tenets of meditation, he pointed out.

Adding virtual reality to the menu is also relatively low-cost for spas; an investment in equipment is required, but not the labor of extra aestheticians or staff, said Kate Mearns, the director of spa and wellness at LIVunLtd Spa & Wellness, a wellness service provider for residential and commercial buildings.

Many of the spas are using Guided VR, a service of Cubicle Ninjas, a digital agency in Glen Ellyn, Ill. Staff members there came up with the idea five years ago during a particularly bad winter, when they started hanging out on virtual beaches.

“Our team didn’t want to leave,” said Josh Farkas, the C.E.O. and founder of Guided VR.

They decided to create guided meditation V.R., and started offering the service to dentists, elder care centers and spas.

The spas pay $150 to $300 per month per headset based on the size of the spa, and Guided VR provides the headset license, hardware setup and “relaxation content.”

“When we built the B2B side, we thought that dentists, doctors and elder care would be a much bigger market, but spas are the most interested and willing to adopt,” Mr. Farkas said.

Perhaps this is because spas are accustomed to charging for add-on services; if not milk and honey in the pedicure water, why not a “trip” to “paradise”?

A virtual reality experience at the beginning of a facial bumps the price up to $555 for 100 minutes from $350 for 90 minutes (the cost of a comparative standard facial at the same spa) at Qua Baths & Spa in Caesars Palace in Las Vegas.

The extra time at the beginning is devoted to a virtual relaxation, the aesthetician helping with the relaxation by touching the client’s body in time with the meditation. Then the goggles are removed and the facial portion of the service begins.

“This really allows the guest to be in that moment, to really relax,” said Kristin Carpenter, the director of spas and salons for Caesars Palace.

But some people think V.R. has no place in settings traditionally devoted to pampering and spiritual escape.

Mary Bemis, the editorial director for Insider’s Guide to Spas, believes that virtual reality and all the gadgets that come with it don’t belong inside a spa.

“In an all too virtual synthetic world, spa culture provides a high-touch, utterly human, unduplicatable experience,” Ms. Bemis said. “In a world of counterfeits, the gold-standard spa experience is that which is real, not virtual.”