Do-gooder or ‘Devil’? A Friar’s Work Divides a Venezuelan Village 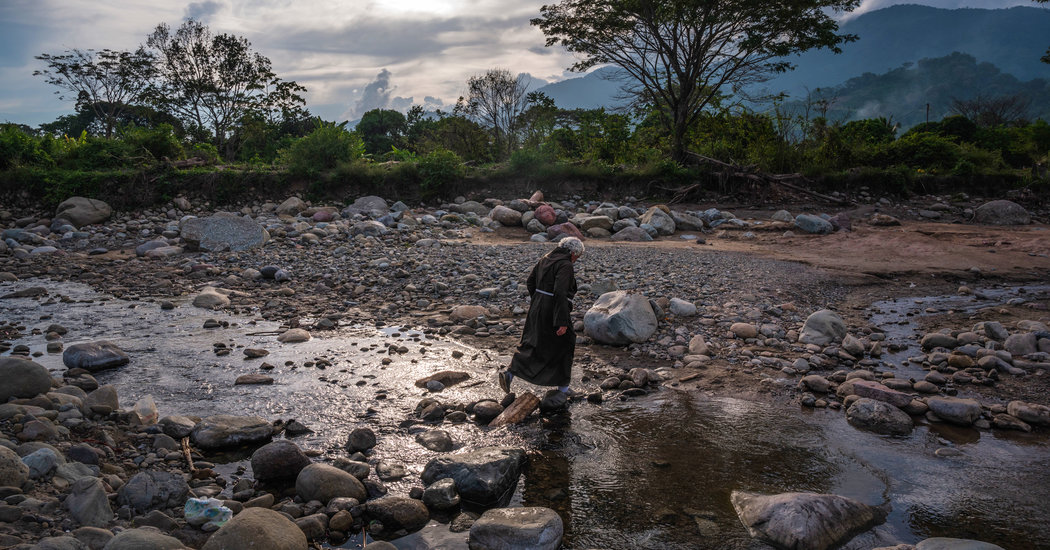 EL TUKUKO, Venezuela — The Rev. Nelson Sandoval’s repeated clashes with Socialist officials, Marxist rebels and tribal chiefs have earned him both loyal followers and bitter enemies in a remote and neglected Indigenous village in the rainforest of western Venezuela.

To some of the community’s 3,500 residents, he is “the Devil.” His supporters know him as their “second father.”

For the last 15 years, Father Sandoval has been working to bring education and health care to the village, El Tukuko.

His allies say this has made him the main lifeline keeping El Tukuko afloat amid Venezuela’s unprecedented economic crisis, underlining how the fortunes of entire communities can hinge on single individuals in a disintegrating country.

His detractors, however, “tell me I will go to hell,” said Father Sandoval, a jovial, 49-year-old Capuchin friar with a penchant for swearing. “I tell them, I’m already living in hell.”

Like most of rural Venezuela, El Tukuko has been devastated by Venezuela’s seven-year economic crisis. Electricity and phone connections are sporadic. Malnutrition is rife and the local state clinic is out of medicines.

Without a police or military presence, the surrounding Perijá Mountains, which stretch to nearby Colombia, have been taken over by cow rustlers, drug traffickers and cross-border rebels.

“They are a curse that has befallen us,” he said of the government of President Nicolás Maduro. “They live like kings while people eat crap. As a Christian, I can’t accept this inconsistency.”

During the oil boom of the 2000s, Venezuela’s central government tried to weaken the Roman Catholic Church’s grip on Indigenous communities like this one with free housing and cash handouts.

But as the government has retreated in the wake of the country’s economic collapse, the Los Ángeles del Tukuko mission that Father Sandoval oversees is again assuming some of the basic functions of the state.

Its outsize role recalls the Church’s secular power — and decidedly mixed legacy — in Latin America’s colonial era, when proselytizing spread deadly germs along with education. And while the Church prevented the Spanish colonists from formally enslaving the Indigenous populations, it often participated in their brutal exploitation.

“Some say the Church is a parasite that feeds on Indigenous lands,” Father Sandoval said in an interview at the mission. “They have no idea of all that we have done for these people.”

During a reporter’s visit to the village in December, Father Sandoval was stopped by everyone he passed on his strolls around El Tukuko’s dirt streets, which were decorated with dozens of homemade Nativity scenes of thatch and clay. Without money for store-bought decorations, most families built makeshift Christmas trees out of sticks and shredded candy wrappers and plastic bags.

As Father Sandoval walked around the village, wearing a thick brown habit, his curly mop of white hair, balding crown and moderate pouch made him resemble a stock Friar Tuck in a “Robin Hood” adaptation.

“Capuchino patume!” said Luisa Pique, a pensioner, as the monk passed by, meaning “the Capuchins are good” in the local Yukpa language. Like most here, Ms. Pique had studied and worked at the mission.

While most in the village admire him, Father Sandoval’s ceaseless, apocalyptic denunciations of Mr. Maduro — “Those who dedicate themselves to doing harm are evil,” he has said — have earned him some sharp criticism among local notables.

Some Yukpa chiefs resent his interference in what they see as Indigenous matters; others believe his politicization of the village’s problems damages their chances of obtaining public resources.

Father Sandoval has denounced the plan of local Yukpa chiefs to appoint an overall head of the tribe as a government plot. He also accused some chiefs of pilfering subsidized food supplies and rustling cattle, earning him a moniker of “the Devil” among their supporters.

“He gets involved in all the arguments,” said Lusbi Portillo, a Venezuelan anthropologist and veteran Indigenous activist. “The work this man does is ideological, political.”

Spanish monks built the Tukuko mission in 1945 to convert the Yukpa people and establish the first peaceful contact with the smaller but more warlike Bari tribe deep in the mountains. The Bari had been fighting a losing war with Venezuelan ranchers, who paid a bounty for every dead tribesman.

The mission’s founder dropped from a helicopter, amid a hail of arrows, on the main Bari village in 1960 to convince their chief to lay down the arms. In return, the friars lobbied the Venezuelan government to declare the Perijá Mountains an Indigenous reservation, protecting the Bari’s remaining lands and helping ensure their survival.

Such stories of the friars’ jungle adventures helped inspire a young Father Sandoval to join the missionary life.

He was born in the conservative ranching town of San José about an hour away from El Tukuko. His mother was a schoolteacher, his father an alcoholic handyman.

Father Sandoval spent his youth caring for his grandfather while his father got drunk, an experience that he said introduced him to the bliss of humility. The violence provoked by his father’s drinking drove Father Sandoval toward the Catholic youth club organized by local friars.

During the club’s field trips to the Perijá Mountains, he discovered the Tukuko mission, an imposing blue neocolonial building set amid deep green foothills, and decided to dedicate his life to its work.

The mission now runs a school for 716 Indigenous children, providing them with nutritious daily lunches, a rarity in Venezuela’s impoverished education system. The nearby state school has just a few dozen students.

About 30 students from remote communities or troubled households, including several orphans, live in the mission.

“He is like a second father to me,” said Marvillo Sevogira, a 23-year-old member of the Bari Indigenous group who is on course to become an engineer thanks to a college scholarship from Father Sandoval.

Tukuko’s mission and its farmland are by far the biggest source of employment in the village, providing dozens of teachers, school aides and farm hands with an income.

The mission has a stockpile of medicine received from the United Nations and from Caritas, a Catholic charity, in stark contrast with the empty shelves in the local clinic.

A nutrition program organized by Caritas with Father Sandoval’s support helped 105 children and pregnant women recover from malnutrition this year, according to the village’s Caritas organizer, Berta Moreno.

“He’s been a major help for everyone here,” said the village nurse, Audio Morran.

When flash floods hit El Tukuko in October, Father Sandoval and Ms. Moreno handed out emergency kits to the affected families. The regional government had banned humanitarian agencies from participating in the relief, according to two aid workers who tried to deliver supplies, and officials have yet to inspect El Tukuko’s affected area.

The office of the local governor, Omar Prieto, did not respond to a request for comment about its handling of the floods.

For all his good works, parishioners say Father Sandoval’s know-it-all, paternalistic attitude can be grating.

At the mission, he chastised Mr. Morran, the village nurse with 27 years of experience, when he came to fill a prescription for a patient.

“I doubt that this is the right combination, though I’m not a nurse or a doctor,” Father Sandoval said with a sniff.

The retreat of Mr. Maduro’s Socialist government has brought Father Sandoval a new, more radical competitor for Yukpa’s hearts and minds. The collapse of law and order in Venezuela has led to the expansion of the National Liberation Army, a group of Colombian-based Marxist guerrillas, in the region.

To garner Indigenous favor, the guerrillas, also known as the E.L.N., promised to redistribute private land and kick out the Church “parasites.”

After several verbal spats, there is now a tense truce between the mission and the rebels, Father Sandoval said.

“I inconvenience them, they are not my friends,” he said. “But they don’t touch me because they know I have the Indigenous support.”

Despite his preaching to the villagers to live a moral life, Father Sandoval said he understands the dilemmas facing his parishioners in the economic crisis. Many of his students have dropped out of school to work the coca fields or cocaine laboratories in Colombia, where they make at least 20 times Venezuela’s minimum wage, according to interviews with four coca laborers in El Tukuko.

“I can’t compete with the offer,” Father Sandoval said. “How can I tell a youth to go study, if they can make so much more scratching coca?” he said, using slang for harvesting cocaine’s raw material.

While church attendance in El Tukuko is under pressure from evangelical groups and secularization, the local community remains deeply attached to Catholic symbols and celebrations.

During the December visit, a farmer blasting Colombian accordion country music from a portable radio knelt by Father Sandoval, called Friar Nelson by everyone here, to ask for his blessing. A blind man asked for dinner at the mission.

“It’s is thanks to them that we can read, write, go on studying after school,” said Mileidi Martínez, El Tukuko’s Yukpa chief, referring to the missionaries. “Friar Nelson works for the well-being of this community. This is his home.”