Despite Litany of Failures, Boris Johnson Is in Striking Distance of Brexit Success 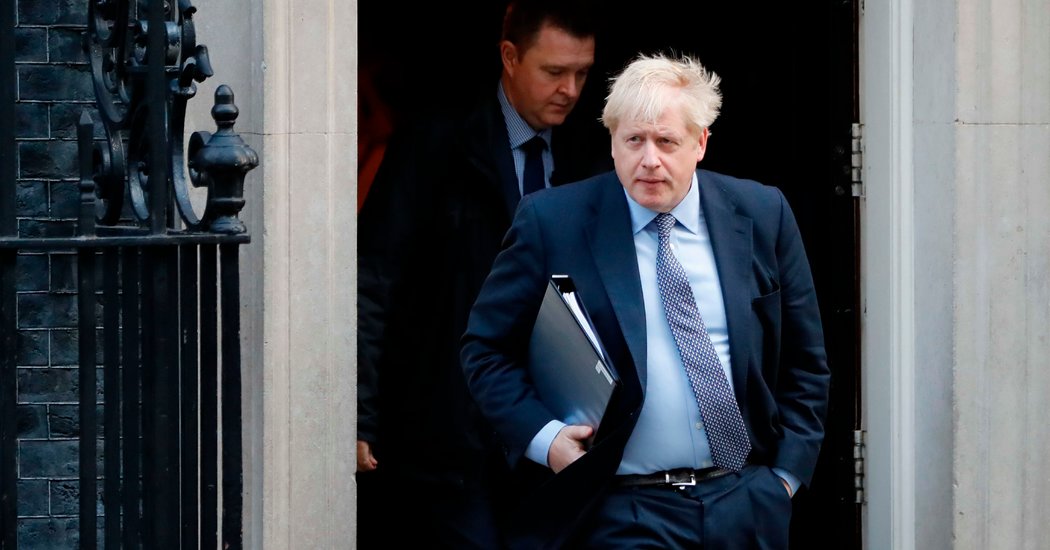 LONDON — He suspended Parliament and was rebuked by Britain’s top court. He purged his party and lost a string of votes. After trying to strong-arm lawmakers into supporting his new Brexit plan, Prime Minister Boris Johnson was forced to ask for a delay for withdrawal from the European Union, a request he had vowed never to make.

Yet, while this litany of failures should be spectacularly good news for opponents of Brexit, who came out in huge crowds onto the streets of London on Saturday, Mr. Johnson still has a surprisingly good chance of leading Britain out of the bloc.

Mr. Johnson is not just still in the game, despite a remarkable succession of miscalculations, but he is also within striking distance of a majority vote in Parliament for his Brexit plan. The foreign secretary, Dominic Raab, predicted on Sunday that the government proposal would pass.

The odds are better than ever because three years of Brexit chaos has left the nation angry, frustrated and tired, the opposition is divided, and many expect a general election for which Mr. Johnson has been gearing up for, with speeches highlighting platform issues such more money for the police force.

The situation is fluid and the math is tight, so the votes expected this week could go either way. But even if they go against him, Mr. Johnson is well placed for the general election that everyone expects soon, analysts say.

Anand Menon, a professor of European studies at King’s College London, described it as a “remarkable turnaround.”

According to Mr. Menon, the prime minister is the beneficiary of “two or three contextual changes” that put him in a better position than his predecessor, Theresa May, who failed three times to win approval for her Brexit deal.

“There is a palpable sense of fatigue about Brexit that is a lot more marked than it was earlier in the year,” Mr. Menon said. “And there is an election coming soon, so everyone is thinking of that.”

But Mr. Johnson is also lucky in that his opponents are divided, unsure of their tactics and fretting about upsetting voters who voted “leave” in the 2016 referendum.

The main opposition Labour Party has always wanted to keep closer economic ties to the European Union. And on Sunday, Labour said it would try to sabotage Mr. Johnson’s new proposal in Parliament with amendments tying Britain more closely to the bloc and putting his plan back to the people in a second referendum, with remaining in the European Union as the alternative.

“They have now arrived at the position where they can agree that whatever deal there is, they want to attach a referendum to it,” said Steven Fielding, a professor of political history at the University of Nottingham. “But they have taken a heck of a long time to get there.”

Reaching this point illustrates the limits of cooperation among opposition parties that expect to be fighting one other soon in an election. No serious effort to oust Mr. Johnson has been made because the Liberal Democrats, a smaller centrist force, do not want Labour’s left-wing leader, Jeremy Corbyn, as prime minister — even on a temporary basis.

Mr. Corbyn’s profile, as a lifelong critic of the European Union and a committed socialist, makes cooperation harder. And anything that would propel him into 10 Downing Street is too much for some critics of Brexit to contemplate.

“They think that Jeremy Corbyn would be an absolute disaster for the country,” Mr. Menon said.

Mr. Corbyn, for his part, has rejected the idea of allowing a less-divisive figure into Downing Street as a caretaker prime minister. But his party is split on whether to have a speedy election — which some fear they would lose — or to hold a referendum first.

The Scottish National Party, which hopes to advance its own cause, independence for Scotland, is pressing for a quick election, calculating that would be to its advantage.

And though the opposition parties have a good chance of preventing Mr. Johnson from rushing his deal through by Oct. 31. by wrecking his accelerated timetable for ratification, agreement on more fundamental points has proved elusive.

“Up to now they haven’t had the votes for a second referendum, so a lot of it has been positioning and posturing between Labour, the Liberal Democrats and the Scottish National Party,” Mr. Fielding said.

So while Mr. Johnson’s tactical plays have blown up in his face and his harsh rhetoric has caused outrage, the campaign for a second referendum has yet to gain traction. Even if lawmakers vote for one this week, the prospects of passing the complex legislation needed to make it happen are remote.

Still, Mr. Johnson has opened the door to that possibility through a series of errors, most recently by striking a Brexit deal that alienated the 10 lawmakers from the Democratic Unionist Party of Northern Ireland, who normally prop up the government. They were furious about the draft deal, saying it would risk cleaving Northern Ireland from the United Kingdom.

The Democratic Unionists look likely to vote against him in Parliament this week, as they did on Saturday when they backed a last-ditch amendment to force a delay, and they even seem to be flirting with the idea of supporting a second referendum.

Angering the Northern Irish party was only the latest in a series of miscalculations. Since becoming prime minister in July, Mr. Johnson has enraged lawmakers by seeking to suspend Parliament for five weeks. That brought him a rare rebuke from the Supreme Court and galvanized his critics to push through a law designed to prevent Britain from leaving the European Union without an agreement.

Mr. Johnson expelled 21 members of his own party for supporting that legislation, which kicked in on Saturday night, forcing him to request another Brexit extension, something he said he would rather be “dead in a ditch” than do.

The biggest risk Mr. Johnson faces now, Mr. Menon said, is how the European Union would time its decision on whether to grant Britain an extension. If Brussels did so before Parliament held another vote on the draft deal, it would deprive Mr. Johnson of a potent argument to fence-sitters: Vote for my deal or face the danger of leaving Europe without any deal.

But that looks unlikely. European Union ambassadors in Brussels met for only 15 minutes on Sunday — deciding to forward Mr. Johnson’s deal to the European Parliament for ratification — and did not even discuss granting an extension. Their strategy appears to be to wait and see if Mr. Johnson can win a majority this week before deciding whether to give Britain more time.

Some influential figures in the bloc would like to grant Britain a leisurely extension, as long as a year, so that the country can resolve its Brexit deadlock once and for all, either through an election or a second referendum.

The European Union “should now grant a final long one, giving the U.K. time to sort itself out & prepare for all possible resolutions,” including a second referendum, Norbert Röttgen, the chairman of the foreign affairs committee of the German Parliament, said in a Twitter post on Sunday. Mr. Röttgen is considered close to Chancellor Angela Merkel.

Other Europeans, however, are fed up with Britain’s anguished indecision and are more than ready for it to leave.

While Mr. Johnson’s tactical gambits have backfired, there is a strategic thread to them, analysts say, that may ultimately prove successful.

He has relentlessly courted hard-line Brexit supporters, Mr. Menon said, in the hopes of staving off a challenge in the next general election from the populist Brexit Party, led by Nigel Farage, that wants a clean break with the European Union.

For the most part, Mr. Menon added, Mr. Johnson has succeeded.