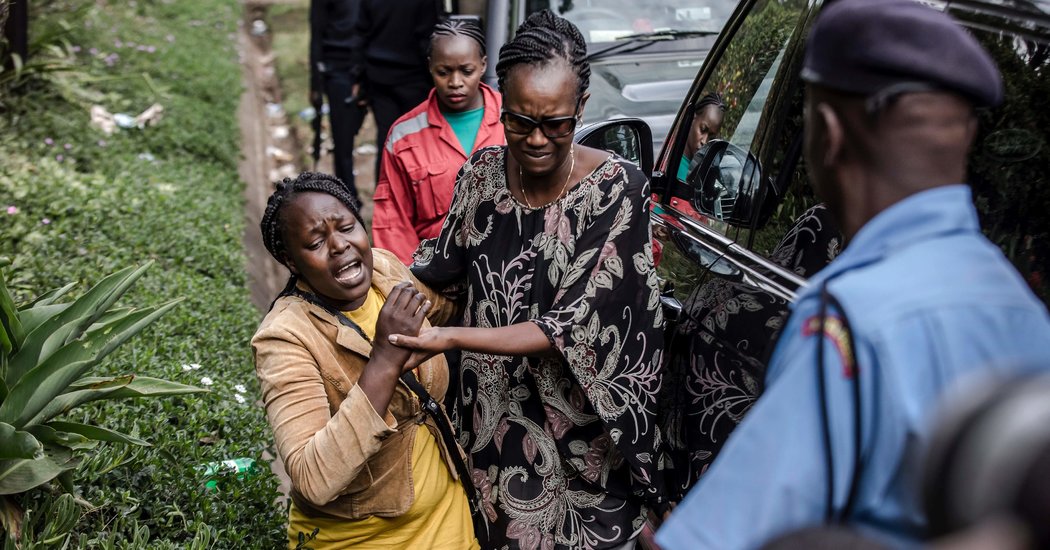 The death toll in a terrorist attack by Shabab militants who stormed a luxury hotel and office complex in Nairobi rose to 14 on Wednesday, President Uhuru Kenyatta of Kenya said.

Mr. Kenyatta said in a speech to the nation that all of the assailants had been “eliminated” and that a security operation was complete. Gunfire had been heard from the complex earlier Wednesday, a day after the authorities had said that all of the buildings in the area of the assault had been secured.

“We will seek every person involved in planning, funding and executing this heinous act,” Mr. Kenyatta said. He said the nation was on the highest alert “and shall remain so.”

Relatives of victims have been searching for more information at morgues and hospitals, and the Red Cross has set up teams to help. Two of those who lost their lives were identified in news reports and on social media as Abdallah Dahir and Feisal Ahmed, who were friends.

The State Department in Washington said that one of the victims was American, providing no details. A man posting on Facebook as Jonathan Spindler identified the victim as his brother, Jason.

Separately, the British High Commission in Kenya said that it was “supporting” the family of a man killed in the attack.

“We can now confirm that 14 innocent lives were lost in this murderous attack,” Mr. Kenyatta said. Seven hundred civilians were evacuated during the response to the terrorist attack, he added.

The attack on Tuesday began around 3 p.m. when four men reportedly jumped out of a white car, opened fire at a security checkpoint and blasted their way into the complex. Security footage showed the gunmen calmly fanning out inside the complex before beginning their rampage.

The police and counterterrorism forces quickly responded. Gun battles were fought and cars burned as the police rushed people out of the complex.

“The operation was executed very strictly and precisely,” said Kenya’s interior secretary, Fred Matiang’i, speaking from the site of the attack shortly after the operation ended. “We are moving now to Phase 2,” which is “handling the criminals.”

Ronald Ng’eno, who works in public relations, was in his office at the complex when he heard a loud explosion followed by gunshots. “We tried to escape, but we soon realized the attackers were coming from outside,” he said. “That’s when we decided to hide in a bathroom. Luckily, they didn’t come looking for us.”

Mr. Ng’eno, 38, said the “rescue operation” had been well coordinated. “I can say the rescue mission was very swift; it was done very fast otherwise the attackers would have found us.”

The Shabab, which carried out a bloody attack at the Westgate mall in the Kenyan capital in 2013, is based in Somalia, where it has sought to impose its strict interpretation of Islam.

Dusit International, which runs the DusitD2 hotel in the Nairobi complex that was attacked, said the hotel had been temporarily closed and that guests had been taken elsewhere in the city, The Associated Press reported.

In his speech, Mr. Kenyatta sought to project an air of normalcy, encouraging everyone to go about their daily business. “We assure every citizen and foreigner that you are safe,” he said.

But he also made clear that the fight against the Shabab and other militant groups would be a long one. “We are also a nation that never forgets those who hurt her children,” he said. “We have prevailed against evil and shall continue to prevail.”