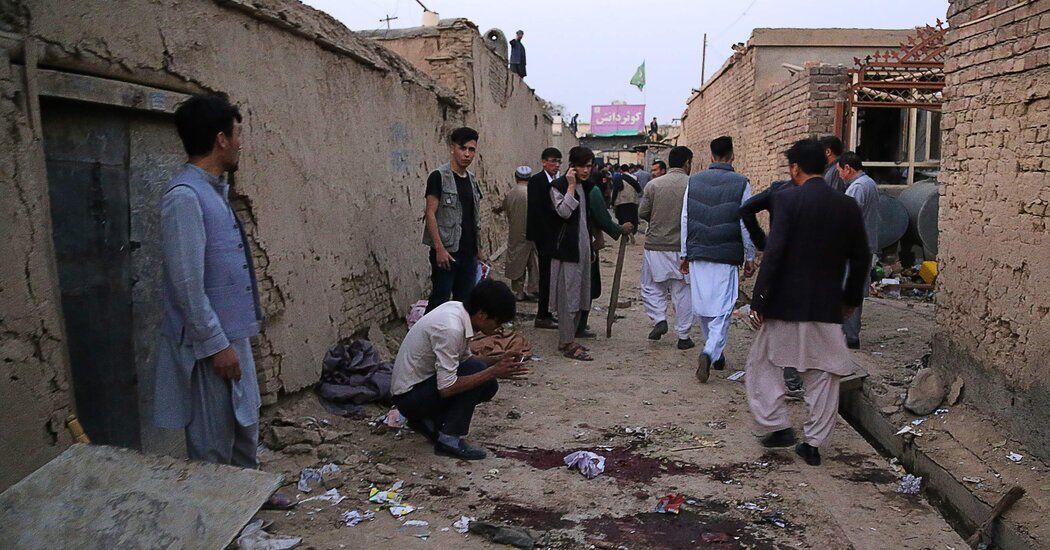 KABUL, Afghanistan — A deadly explosion struck a tutoring center in Kabul on Saturday, puncturing a relatively peaceful period in the Afghan capital even as violence has spiraled upward in the countryside.

Tariq Arian, a spokesman for the Afghan interior ministry, said at least 24 people were killed and 57 others wounded in the attack. He said the explosion happened in an alley leading to an educational center called Kawsar e Danish.

Mr. Arian said the attack was carried out by a suicide bomber on foot who was stopped before he could enter the educational center and detonated his explosives at the entrance.

“Ambulances are still transferring the bodies,” said Abuzar Motaqi, head of the main hospital in the area. “ Most of them are very young.”

Kabul has recently been spared the large attacks that had once struck the capital regularly. But Saturday’s explosion comes amid an intensifying wave of violence happening elsewhere across the country as peace talks continue in Qatar between the Taliban and the Afghan government.

The Taliban, in a statement issued soon after the explosion, denied they were behind the Kabul bombing.

Recent appeals from Afghan leaders and American diplomats for a reduction of violence to allow for progress in negotiations have proved futile. Insurgents have launched bloody assaults across the country that have killed dozens of people, both security personnel and civilians, on a daily basis.

Civilians often bear the brunt of the violence. In eastern Ghazni province, a Taliban roadside bomb was detonated early Saturday morning as a civilian and a police vehicle were passing through the area. At least eight civilians and one police officer were killed, according to Wahidullah Jumazada, the spokesman for the governor of Ghazni.

After the United States in February agreed to begin withdrawing its troops from Afghanistan, the Taliban and the Afghan government finally came to the negotiating table last month. But since then, the two sides have been stuck in preliminary discussions on the rules and regulations that will govern their negotiations.

In the area west of Kabul city where the Kawsar education center is based, soft civilian targets such as learning centers, wedding halls and hospitals have been repeatedly attacked in recent years. Most of those attacks have been claimed by the Islamic State offshoot in Afghanistan.

While the Islamic State’s stronghold in eastern Afghanistan has been nearly dismantled by government military operations, the group remains a threat in urban centers. Afghan officials say the group has changed its tactics by splitting into small cells that communicate with sophisticated technology, making the monitoring of them difficult.