Thursday’s session signaled that the market is “getting genuinely overexuberant” and the major averages could become wobbly if more IPOs become overvalued in the near future, CNBC’s Jim Cramer said.

Pinterest and Zoom made a big splash in their debuts to public markets, while other unicorns like Uber and Slack, among others, sit in the pipeline. The Dow Jones Industrial Average added 110 points on the day, the S&P 500 gained 0.16% and the Nasdaq Composite inched 0.2%.

“If we get a few more of these red-hot, yet hopelessly overvalued deals … the averages will start to feel the pressure,” the “Mad Money” host said. “That will lead to a sell-off like we haven’t had in ages as investors dump existing stocks to raise cash for the next big IPO.”

U.S. markets will be closed on Friday in observance of Good Friday. Cramer said a “crazy week” of trading will follow on Monday. Earnings season has been positive thus far, but it can be “crushed” by an “avalanche of new supply,” he added.

As more than 100 S&P 500 companies report next week, the host warned not to trade stocks off headlines that look positive or negative because it’s a losing strategy.

“Today we got the first taste of what I believe will be many more deals that are just too expensive for my taste. So keep that in mind,” he said. “Even as I expect some terrific quarters buried in next week’s cacophony of earnings reports, call me wary.” 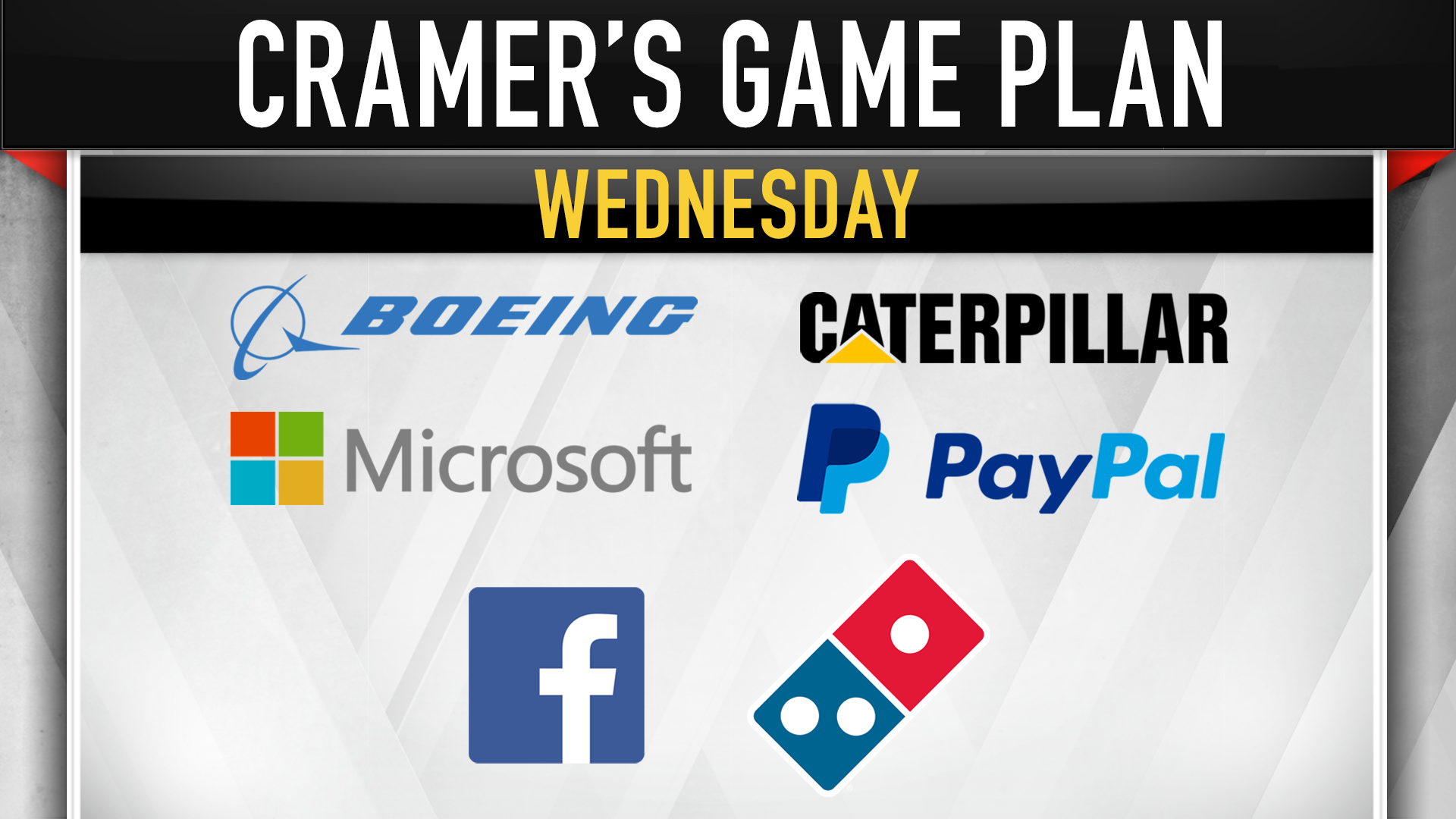 Kimberly-Clark: The personal care products maker reports earnings before the market opens. The stock has climbed more than 9% in 2019 and reached a new 52-week high in Thursday’s session. Cramer said the stock has a “safe dividend yield in a time of declining interest rates.”

“I want to hear about their raw costs and worldwide market share and freight issues,” he said.

Whirlpool: The home appliances manufacturer will release its latest quarter results after the market closes. It’s had a string of disappointments, Cramer said.

“With mortgage rates down and housing improving, a big-ticket appliance maker like Whirlpool should be doing so well, you can’t bet on these guys, though. Too unreliable,” he said.

Verizon: The telecommunications company releases its earnings results before the bell.

“I expect a good quarter from Verizon, which will be greeted positively,” Cramer said.

“I think they’ll do fine and we’re getting closer to that big breakup of the company: elevators … climate controls, and then of course aerospace … and that will unlock a ton of value,” he said.

Coca-Cola: The soda giant will serve up its latest earnings results before stocks start trading.

The Coke maker “follow a picture-perfect accelerated growth quarter from PepsiCo, so they’re in a tough position — too tough for me,” Cramer said.

Procter & Gamble: Kimberly-Clark’s earnings call will provide an early glimpse into what could be expected in Procter & Gamble’s report, which comes in the morning, Cramer said.

“If freight and plastic are under control for Kimberly, you can bet that they will for P&G, too, which should propel that incredible stock even higher,” he said. “If it goes down, I’d consider buying some.”

Centene: Centene has an earnings call before the bell. The report will tell investors how the managed care sector will trade, Cramer said.

“I believe Centene will report a terrific number, but health care is hated right now,” he said. “If the stock can rally anyway, let’s just say that’s good news for this horrendous group.”

“As for the semis, they need their temperature taken constantly. Texas Instruments will tell us whether the group is too hot or just right,” he said.

Snap: The parent of Snapchat, is up more than 111% this year.

“I don’t care all that much about Snap after the close, except that its stock has doubled since the start of the year,” Cramer said. “But in light of the enthusiasm for Pinterest, we need to take a good hard look at the level of euphoria in this market to be sure things aren’t totally out of control.”

eBay: The online marketplace group will give quarter results after the bell, which could include a strategic review from activist investor Elliott Partners, Cramer said.

“I hope they break up the company to unlock value,” he said.

Boeing: The airplane maker delivers its quarterly numbers in the morning and it could feature a guidedown on cash flow projections, Cramer said.

Caterpillar: The machine manufacturer has an earnings call in the morning.

Domino’s Pizza: The pizza chain will give its latest quarter results before the market opens. The company got an upgrade this week, which could mean growth is working both domestically and internationally, Cramer said.

“If you think that’s the case, it’s worth owning,” he said.

Microsoft: The computer giant will report earnings after the bell. Cramer said the stock is one of the great growth stocks of the era.

“We own it for the charitable trust and, like others, have been reluctant to take profits because we strongly believe in CEO Satya Nadella, who has reinvented the business,” he said.

Facebook: The social media giant also releases quarterly results after trading ends. The company has “taken a licking but it keeps on ticking,” Cramer said.

“The hope here, obviously, is that Instagram’s still growing like crazy,” he said.

PayPal: The payments company will reveal numbers after the market closes. Cramer regrets selling the stock out of his ActionAlertsPlus.com charitable trust.

“PayPal’s had an amazing run here, so if it gets hit, I would love for the trust to buy it back,” he said.

3M: 3M presents its first-quarter report before the bell. The stock has moved up 20 points on no news, Cramer said.

“If 3M doesn’t deliver an upside surprise or at least a restructuring on Thursday, I think it gets hammered,” he said.

Amazon: The e-commerce behemoth reports earnings after the market closes.

“Amazon should have some excellent web services numbers,” Cramer said.

Ford: The Mustang manufacturer will deliver earnings results after the bell.

“Ford has rationalized to the point where I think the bad numbers may be behind them. I actually expect a good number. I think the stock can keep going higher, 6% yield” he said.

Starbucks: Starbucks comes out with its latest earnings at the end of the trading day.

Exxon: Exxon delivers its results before the market opens.

Colgate-Palmolive: The dental products company has an earnings call in the morning.