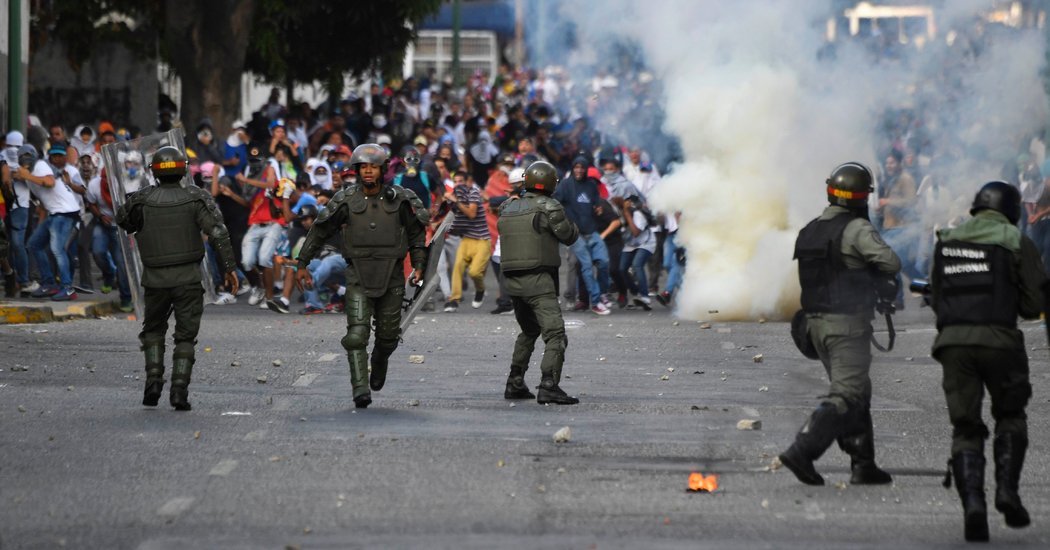 The United Nations human rights chief, Michelle Bachelet, condemned the killings by forces loyal to the embattled president, Nicolás Maduro, who has come under mounting domestic and international pressure to resign as his country sinks deeper into a political and economic crisis.

Ms. Bachelet, who served two terms as president of Chile, said she was “extremely concerned that the situation in Venezuela may rapidly spiral out of control with catastrophic consequences.”

[The crisis in Caracas could have repercussions for Venezuelans in the United States, many of whom are seeking asylum.]

In the capital, Caracas, and in other cities, large crowds of demonstrators clashed with the police and armed groups this week — confrontations punctuated by gunfire — amid deepening desperation about food shortages and an economic collapse that has driven three million Venezuelans abroad.

The political chaos escalated this week when an opposition leader, Juan Guaidó, proclaimed himself Venezuela’s rightful president. The move quickly attracted support and promises of aid from President Trump’s administration and from several other governments.

Pro-Maduro military leaders pushed back on Thursday, proclaiming loyalty to Mr. Maduro and warning of civil war. In a further boost to Mr. Maduro, President Vladimir V. Putin of Russia phoned the Venezuelan leader to demonstrate support and warned the United States against meddling in Venezuelan affairs.

After remaining out of sight on Thursday, Mr. Guaidó said he would hold a news conference at 11 a.m. on Friday, when he would talk about the opposition’s next steps.

During an interview on a radio show Friday morning, Mr. Guaidó urged Venezuelan diplomats in the United States to keep working and to refuse orders to return home this weekend, in defiance of a decision by the Maduro government to cut diplomatic ties with Washington.

Mr. Guaidó said the transition team had been busy over the past couple of days, developing plans to bring humanitarian aid to Venezuela and to start mending the economy. But, speaking from an undisclosed location, he acknowledged the precariousness of his situation.

“They could imprison me today,” he said. “We can’t rule anything out.”

Venezuelan security forces have cracked down on the opposition, raiding homes and making hundreds of arrests, according to the United Nations human rights office, based in Geneva, which reported 320 arrests on Wednesday alone.

“This is, at heart, a crisis of governance, and it is the responsibility of the country’s leaders to put an end to this disastrous situation,” Ms. Bachelet said, urging Venezuela’s political leaders to meet to defuse the crisis.

“What more is needed before the political leadership put their people’s well-being ahead of their own interests?” she asked.