Coronavirus Finds Fuel in a World of Migrants 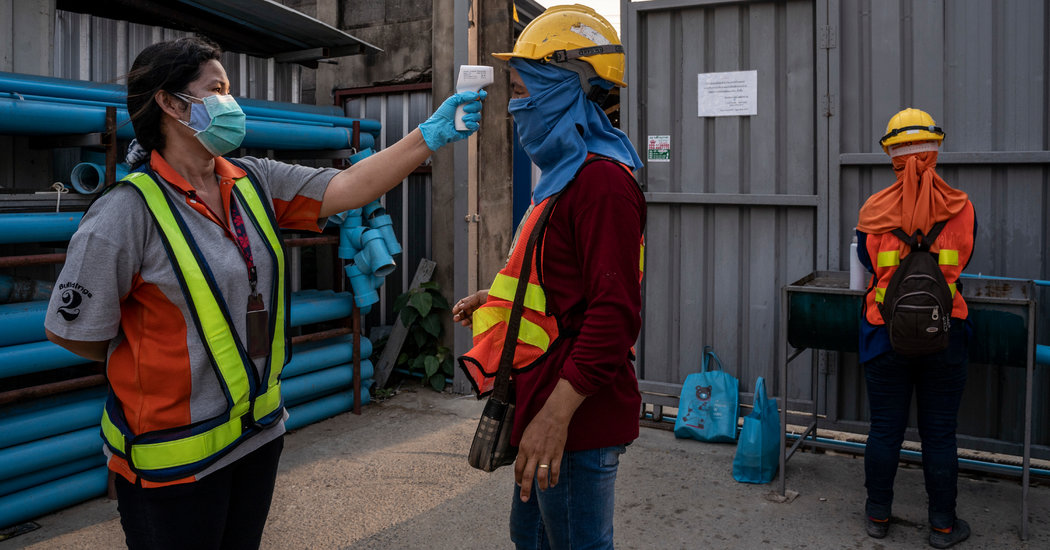 BANGKOK — His whole family back in Myanmar depended on him. But Ko Zaw Win Tun, one of an estimated four million migrant workers in Thailand, lost his job at a Bangkok toy store when the city went into a coronavirus lockdown.

With little hope of a new job there, Mr. Zaw Win Tun, 24, joined the crowds of workers rushing home to Myanmar, traveling by packed bus, plane and car to reach his hometown, Kyaukme, in the country’s north.

The morning after he returned, the fever set in. A test for the coronavirus came back positive.

The coronavirus spread early through international travelers: tourists, worshipers, conference attendees and members of the business elite. But nearly 200 million migrant workers also travel across national borders, according to the International Labor Organization. About 760 million more move within their countries, more than 40 million in India alone.

Lacking basic rights and marooned in unfamiliar places, migrant workers are usually the first in the labor force to be hit by an economic downturn. Now, as the coronavirus disease, Covid-19, spreads across the globe, migrant workers are not only victims but vectors, too, taking the epidemic to villages ill-equipped to deal with a health crisis.

“When the virus attacks people who are vulnerable like me, I feel like there is no help for us,” Mr. Zaw Win Tun said from his hospital bed.

Late last month, the Myanmar government said it would close its borders with Thailand to stem the virus from invading the country. The proposed lockdown, though, had the opposite effect, as panicked migrants rushed home. At one border crossing, 30,000 people descended in a single day, according to rights groups.

The same thing happened in Afghanistan, which shares a long, porous border with Iran. With Iran’s economy collapsing as it was hit early and hard by the coronavirus, as many as 15,000 Afghan laborers streamed back home a day, spreading the virus around the country.

Government officials, as well as Taliban insurgents who control parts of the country, attempted makeshift contact tracing. The governor of northern Faryab Province, Naqibullah Faiq, ordered an investigation of the first migrant returning from Iran who brought the virus back with him.

The results were sobering.

Even as these communities have been sustained by remittances from overseas workers, they have also greeted potentially infected laborers with suspicion.

Anil Singh, a laborer, heard about the lockdown on television and crammed blankets in a backpack and filled three plastic bags with his children’s clothes. Over three days, his family of five walked and hitched truck rides for the 265-mile journey home to the central Indian state of Madhya Pradesh.

Along the way, they were forced to squat with hundreds of others for hours, as the police moved a long stream of migrants through checkpoints. No social distancing occurred.

When Mr. Singh and his family finally made it to their village of Damoh, the indignities continued. Old friends shunned them, telling them they should shelter in nearby farmland rather than in the village.

“When villagers pass by my house, they shout, ‘You are carrying disease!’” Mr. Singh, 36, said. “Earlier they used to respect us for working in the city. Now that has become a curse for us.”

In the north Indian state of Uttar Pradesh, returning migrants were forced to kneel while the authorities used hoses to spray them with corrosive disinfectant. More than a dozen died in the chaos of the lockdown.

In the Philippines, where more than 10 percent of the population works overseas, most returning migrants were not screened for the coronavirus, even if they were coming from places with known viral outbreaks.

Nearly 4,500 cruise ship employees have returned to the Philippines, some from ships that teemed with the virus. But unless they showed symptoms, these seafarers were never tested, said Joanna Concepcion, the chair of Migrante International, which works to protect the rights of overseas workers.

“Many are fearful that they may be carriers as they return home to their families,” Ms. Concepcion said.

At least 525 Filipino workers have contracted the disease overseas, according to the foreign department. About 50 have died.

The crowded conditions in which migrants live and work serve as breeding grounds for contagion.

In Singapore, construction sites and dormitories for foreign workers have become hot spots of the coronavirus, with more than 400 people infected. The largest single cluster of cases is in one such dormitory, provoking concern that Singapore, while having been applauded for its virus-containment strategy early on, has seen disease fester in some of its poorer communities.

The government has responded by quarantining migrants in four dormitories that can hold about 50,000 people. Conditions are dire, with a dozen to a room, sharing often-filthy toilets.

Unlike many other countries, Singapore, an island city-state, does not depend on undocumented workers. Its roughly one million low-wage migrant workers, in a nation of 5.5 million residents, are legal and theoretically afforded the same basic labor rights as Singaporean citizens. Those being quarantined in the dormitories are being provided meals although it’s not clear who will eventually pay for them.

Nevertheless, isolating so many people in such cramped quarters could facilitate the rapid transmission of disease, just as happened on cruise ships, rights groups warned.

“Quarantining people en masse, packed in like sardines in these dormitories, is to potentially sacrifice these foreign workers for those outside the barrier,” said Alex Au, the vice president of Transient Workers Count Too, a labor rights group. “Is that something we want to do as a society?”

Singapore’s long reliance on a vast underclass of cheap labor from places like India, China, Bangladesh and Myanmar has discomfited some Singaporeans.

Tommy Koh, a former high-ranking diplomat, posted on his Facebook account about the “disgraceful” conditions that migrant laborers endure.

“The way Singapore treats its foreign workers is not First World but Third World,” he wrote.

Mr. Au said that the coronavirus would almost certainly galvanize Singapore’s efforts to use automation to replace certain low-income jobs. The city-state has been experimenting, for instance, with driverless public transportation.

But most countries don’t have the resources of a place like Singapore, which is among the world’s richest. Without adequate opportunities at home, migrants will still go to where the jobs are, even at the risk of disease.

Rakesh Kumar, a construction worker in New Delhi, said that as he set off for his home in Uttar Pradesh, his next meal was foremost on his mind, not some invisible virus that might have been carried by another migrant squeezed in with him on the bus.

“Now we are living in a situation where hundreds of thousands of people could be going to bed hungry,” he said. “The rich will always save themselves but disease always hits the poor and leaves them devastated.”