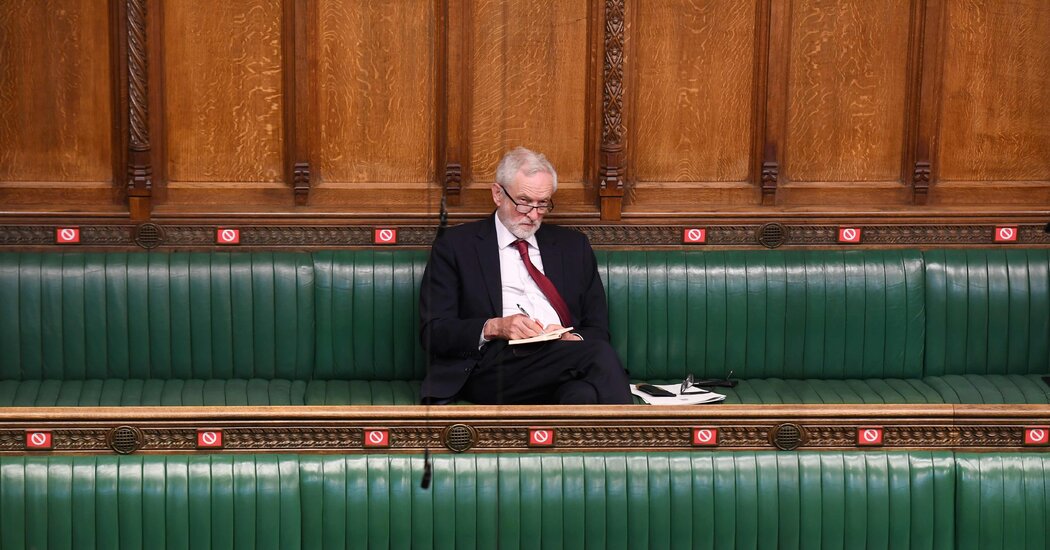 The decision, coming three weeks after Labour suspended Mr. Corbyn over those comments, provoked immediate anger from some groups of British Jews, who said his attempts to walk back his comments from last month were weak.

But while Mr. Corbyn’s readmission, decided on by a panel of the party’s governing body, means that he will return to being a member of the Labour Party, it was not immediately clear on Tuesday night if he would be allowed to return to the party’s benches in Parliament as a Labour lawmaker.

That decision is reserved for Mr. Corbyn’s successor, Keir Starmer, who faced intense pressure from some Jewish groups and some Labour lawmakers on Tuesday night not to allow Mr. Corbyn back into the party’s ranks in Parliament. (Since the suspension, Mr. Corbyn has retained his seat in Parliament, but lost his affiliation with Labour.)

Mr. Corbyn’s suggestion that the party’s problems with anti-Semitism were overblown came last month after a British human rights watchdog found that Labour bore responsibility for “unlawful acts of harassment and discrimination” against Jewish members on his watch. The party had long faced accusations that it had dithered in its response to allegations of anti-Semitism and interfered on behalf of Mr. Corbyn’s political allies.

After the release of the human rights report, Mr. Corbyn said the yearslong scandal had been overblown by the media and his political opponents.

“One anti-Semite is one too many, but the scale of the problem was also dramatically overstated for political reasons by our opponents inside and outside the party, as well as by much of the media,” he wrote at the time. “That combination hurt Jewish people and must never be repeated.”

On Tuesday, Mr. Corbyn released a statement in an effort “to clear up any confusion about what I had meant.”

“To be clear, concerns about anti-Semitism are neither ‘exaggerated’ nor ‘overstated,’” Mr. Corbyn wrote in the newly released statement, which he said he had also submitted to the Labour Party shortly after he was suspended. “The point I wished to make was that the vast majority of Labour Party members were and remain committed anti-racists deeply opposed to anti-Semitism.”

Some Jewish groups in Britain saw Mr. Corbyn’s suspension as the clearest signal from Mr. Starmer, a former prosecutor and human rights lawyer, about the party’s changed approach to rooting out anti-Semitism and repairing ties with British Jews.

But casting out Mr. Corbyn, a longtime torchbearer for Labour’s hard left, also risked plunging the party back into the vicious factional disputes that became its trademark during his five years in charge, which ended earlier this year.

While Labour may have hoped that reinstating Mr. Corbyn would restore a measure of equanimity to the party, it did not immediately seem to have that effect. Some groups of British Jews long opposed to Mr. Corbyn’s leadership reacted angrily, and some Labour lawmakers were said to oppose the decision, too.

“Any reasonable and fair-minded observer would see Jeremy Corbyn’s statement today as insincere and wholly inadequate,” the Jewish Labour Movement said in a statement. “Once again we find ourselves having to remind the Labour Party that Jeremy Corbyn is not the victim of Labour anti-Semitism — Jewish members are.”

In a statement on Tuesday night, Mr. Starmer did not directly address Mr. Corbyn’s readmission into the party. But he said that the former leader’s comments last month were “wrong” and that he would work to establish an independent process for litigating complaints of anti-Semitism within the party as soon as possible next year.

“I will not allow a focus on one individual to prevent us from doing the vital work of tackling anti-Semitism,” he said.

The report by Britain’s Equalities and Human Rights Commission, an independent official watchdog group whose recommendations are legally enforceable, found that Labour’s political leaders had interfered in the party’s own investigations of anti-Semitic incidents. Those included a complaint against Mr. Corbyn for once defending a mural that featured grotesque caricatures of hooknosed Jewish bankers.

The watchdog group also described the party as having created a culture that could, at times, be seen as tolerant of anti-Semitism and accused two former party officials of anti-Semitic comments that it said amounted to unlawful harassment.

Some groups of British Jews were withering in their reaction to Mr. Corbyn’s attempts to clarify his comments on Tuesday.

“The Jewish community does not accept this pathetic non-apology from Jeremy Corbyn,” Marie van der Zyl, the president of the Board of Deputies of British Jews, said in a statement. “Keir Starmer rightly called the day of the release of the E.H.R.C. report a ‘day of shame.’ Jeremy Corbyn’s response, by contrast, was shameless.”