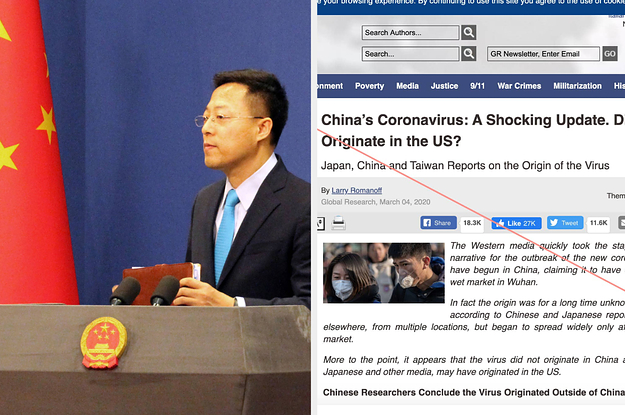 On Thursday, a prominent Chinese diplomat tweeted a false conspiracy theory that the novel coronavirus did not originate in Wuhan, China, but in the United States.

“This article is very much important to each and every one of us. Please read and retweet it. COVID-19: Further Evidence that the Virus Originated in the US,” Lijian Zhao, the deputy director general of the Information Department of China’s Foreign Ministry, tweeted. In a follow-up tweet, the diplomat wrote, “Just take a few minutes to read one more article. This is so astonishing that it changed many things I used to believe in. Please retweet to let more people know about it.”

The tweet linked to a story on conspiracy theory site Global Research that falsely claimed the novel coronavirus originated in the US. Experts at the World Health Organization have concluded the disease first appeared in the Chinese province of Hubei. As of Friday, the disease has infected 137,860 people and killed 5,074 around the world.

The false claim was far from the only piece of propaganda that Zhao, the most prominent member of China’s Foreign Ministry on Twitter, has pushed about the coronavirus outbreak in the last week — a strategy that didn’t convince anyone, but appears designed to polarize the US government and disrupt any bipartisan mitigation efforts.

Zhao and Hua Chunying, another spokesperson for China’s foreign ministry, have flooded Twitter with posts lauding the Chinese Communist Party’s response to COVID-19 and indulging in conspiracy theories about the disease. Unlike other parts of China’s propaganda apparatus, which are typically concerned with manipulating homegrown social networks like Weibo and WeChat, Zhao, Hua, and a small group of other diplomats have become more and more brazen about taking their information war to American platforms.

Following Zhao and Hua’s tweet, the State Department summoned the Chinese Ambassador to the United States Cui Tiankai on Friday. The Chinese embassy did not respond to a request for comment. President Trump, in a coronavirus press conference Friday, was asked about Zhao’s propaganda efforts. Trump waved them away, saying they wouldn’t impact trade with China.

Del Harvey, Twitter’s vice president of Trust & Safety, said the platform is assessing things “case by case” and that government officials don’t have special rights to post harmful information, but the platform is also taking into account if the replies to tweets are providing “corrective” information.

Zhao, who currently has 284,000 followers on Twitter, first went viral in the US last July. He did so again last November after he fired off an eight-part tweetstorm about American racism and mocked President Donald Trump.

“This is a time for Chinese diplomats to tell the true picture,” he told BuzzFeed News in December.

This week, Zhao and Hua seized on a controversy started by right-wing media and prominent Republicans, who began calling COVID-19 as “the Chinese coronavirus.”

“People you know will get sick. Some may die. This is real,” Carlson said. “People you trust — people you probably voted for — have spent weeks minimizing what is a very serious problem,” he said. He spoke next to a graphic that blared: “the Chinese coronavirus.”

Carlson’s “Chinese coronavirus” set off a political dispute in the US, with prominent Republicans and right-wing influencers using the term, while Democrats like Rep. Grace Meng, vice-chair of the Congressional Asian Pacific American Caucus, condemned it in a statement as “embarrassing, disrespectful, offensive, and downright disgusting.”

Compared to where it ended, the diplomats’ Twitter campaign began this week relatively innocuously.

Zhao waded into the controversy on Monday with a four-tweet thread, which included an editorial from the Global Times, an English-language Chinese state-run news site, attacking US Secretary of State Mike Pompeo for calling it the “Wuhan virus.” Zhao tweeted out another Global Times editorial demanding the US apologize to the world for how it has handled the coronavirus outbreak.

On Thursday, Zhao retweeted Hua, who shared an article by the Gray Zone, a pro-Russia independent news site, which cast doubt on China’s detention of Uighur Muslims. “It seems that some US officials enjoy smearing China around the clock and around the world,” she said.

Both Hua and Zhao went on to jumped on statements made by Centers for Disease Control Director Robert Redfield during a House committee hearing on Wednesday, where he said that some Americans were diagnosed with influenza, but actually died from COVID-19. The clip was translated into Chinese and spread by state-run media, both on Twitter and YouTube, as well as Chinese platforms like Weibo.

On Thursday, Zhao tweeted an article from the Centre for Research on Globalization, a conspiracy theory site written by Canadian economist Michel Chossudovsky, who was accused by the Globe and Mail in 2017 of pushing Russian propaganda. In the article, Larry Romanoff, a regular writer for the site who has posted a bevy of misinformation about the coronavirus, cites a Chinese study, covered by Global Times, that claimed the virus began in late November somewhere else than Wuhan. It also mentioned an article from Japan’s Asahi Shimbun that also reported Americans who were diagnosed from influenza actually had COVID-19. Zhao’s tweets about the article were shared a combined 7,000 times.

The Global Times jumped on Zhao’s tweets, writing two different articles about them. The CRG article, according to social metrics site CrowdTangle, has been shared over 7,000 times on Facebook.

It’s unlikely that Zhao and Hua’s Twitter accounts are convincing Americans that the coronavirus originated in the US, but they have inflamed America’s political divisions.

According to CrowdTangle, Zhao’s tweets about a US coronavirus origin got the most attention from two Twitter users: Donald Trump Jr. and pro-Trump media personality Mike Cernovich. Trump quote-tweeted Zhao, blaming the media and Democrats for helping Zhao spread propaganda. Cernovich also quote-tweeted him, demanding the US end all trade with China because of Zhao’s tweets and also blamed US media for helping spread Chinese propaganda.

Meanwhile, behind China’s Great Firewall, where the government bans Twitter, the hashtag topic “Zhao Lijian sent out five consecutive tweets questioning the US” has been read more than 4.7 million times on Weibo, with Chinese users cheering him on.