Carlos Ghosn, Fugitive but a Favorite Son, Returns to Beirut 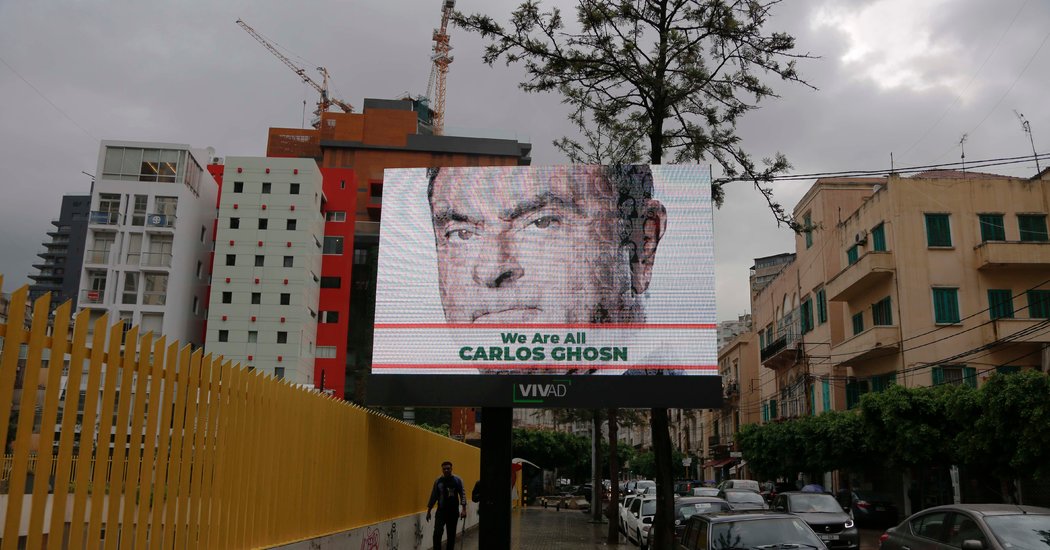 BEIRUT, Lebanon — For weeks last winter, Carlos Ghosn’s face seemed inescapable in the Lebanese capital, appearing without warning on digital billboards normally devoted to ads for cellphone plans and fancy cars. “We are all Carlos Ghosn,” the text announced, declaring support for the man charged in Japan as a corporate titan gone bad.

Mr. Ghosn, the former chairman of Nissan, has abruptly announced that he is in Beirut, where he grew up, after escaping Tokyo, where he was set to stand trial next year on charges of financial wrongdoing.

Almost nothing about how he got here is clear: How did he evade the constant surveillance of the Japanese authorities? How did he manage to clear passport controls in at least two countries without any of his three passports (Brazilian, French, Lebanese)? Who helped him? And was he smuggled out in a box, as some unconfirmed reports say?

“It’s a real adventure,” said Ricardo Karam, a Lebanese television host who has interviewed Mr. Ghosn on his show, and who was briefly rumored on Tuesday morning — falsely, Mr. Karam said — to be providing the escapee with a place to stay. “It’s like a movie.”

Box or no box, in Lebanon Mr. Ghosn has probably picked a safe hide-out. The country is staggering through a financial and political crisis, and its new government, which does not yet officially exist, is contending with persistent antigovernment protests and a slow-motion economic collapse. Even if things were less of a shambles, Lebanon does not have an extradition treaty with Japan: checkmate.

Besides, Beirut residents seem pleased to have him. Some of them, at least.

“I’m surprised and happy. All the family is in solidarity with Carlos,” said Sandra Nader, who said she was a relative of Mr. Ghosn.

“We’re proud of his achievements and what he’s done abroad,” said Mireille Firzli, who was doing her New Year’s Eve grocery shopping Tuesday afternoon. “It’s not fair to put him in jail.”

Mr. Ghosn was born to a Lebanese family in Brazil, home to a large Lebanese diaspora community, and educated in Beirut and France, home to another. His father moved the family from Rio de Janeiro to Beirut when Mr. Ghosn was 6.

Ever since, Mr. Ghosn has lived the Lebanese dream. If the Lebanese are not, as the billboards had it, “all Carlos Ghosn,” there were many who may have wanted to be.

Generations of Lebanese have left the country, fleeing civil war, instability and an economy that offers little to young people, to make their fortunes abroad. Mr. Ghosn was a paragon of that path: prestigious schools in Paris, promotions at Michelin in France and then the United States, the chairmanship of a multicontinent auto empire including Nissan, Mitsubishi and Renault. There were homes in Tokyo, in the 16th arrondissement of Paris and in Rio, plus a private jet to carry him there.

But throughout his global rise, Mr. Ghosn remained proudly Lebanese, and the Lebanese proud of him. His first and second wives are both Lebanese. He graduated from the middle-class neighborhood of his childhood to Achrafieh, Beirut’s grandest community, where he kept an immaculate pink villa — which, an internal Nissan investigation found, a company subsidiary had bought for $8.75 million and renovated for a further $6 million, one of several properties around the world the subsidiary had paid for Mr. Ghosn to use.

In February, Mr. Karam, the Lebanese television host, aired a 47-minute special on Mr. Ghosn, lionizing his career and lamenting his fall.

“The legend of the car world is currently in cold, solitary prison,” Mr. Karam said at the end, quoting the Rev. Dr. Martin Luther King Jr.: “Injustice anywhere is a threat to justice everywhere.”

On Tuesday, a private security guard stood outside the pink mansion, but Mr. Ghosn was not to be seen. He had issued a statement through a spokeswoman announcing that he would “no longer be held hostage by a rigged Japanese justice system.”

He added: “I have not fled justice — I have escaped injustice and political persecution.”

In fleeing Japan for Lebanon, Mr. Ghosn has traded a country where the rigidity of the justice system has come under scrutiny for one where the judiciary is notoriously politicized and the rule of law notoriously fickle. But the same atmosphere of impunity that may help him is under attack from some of the very people who once celebrated him as a folk hero.

The current antigovernment protests, which began in mid-October and at one point drew as much as a quarter of Lebanon’s population of 4 million into the streets, have taken aim at political elites, rich bankers and businessmen and the corruption that is said to enrich them all.

Chanting, “Give back the stolen money,” the protesters have demanded a new political system, new leaders, an overhauled banking system and an independent judiciary that they hope will bring corrupt politicians and businessmen to justice.

At such a time, Mr. Ghosn’s great escape, with its above-the-law audacity, may sit strangely with the national mood.

Mohamed Abdullah, a fisherman in Beirut, had more pressing concerns than the fate of a man unimaginably richer than he. For one thing, no one was buying fish.

“Who cares? With this bad economy, I could care less about Ghosn,” he said, upon hearing the news.

“As if this country needs more thieves,” he said. “This is just adding one more thief to the list.”