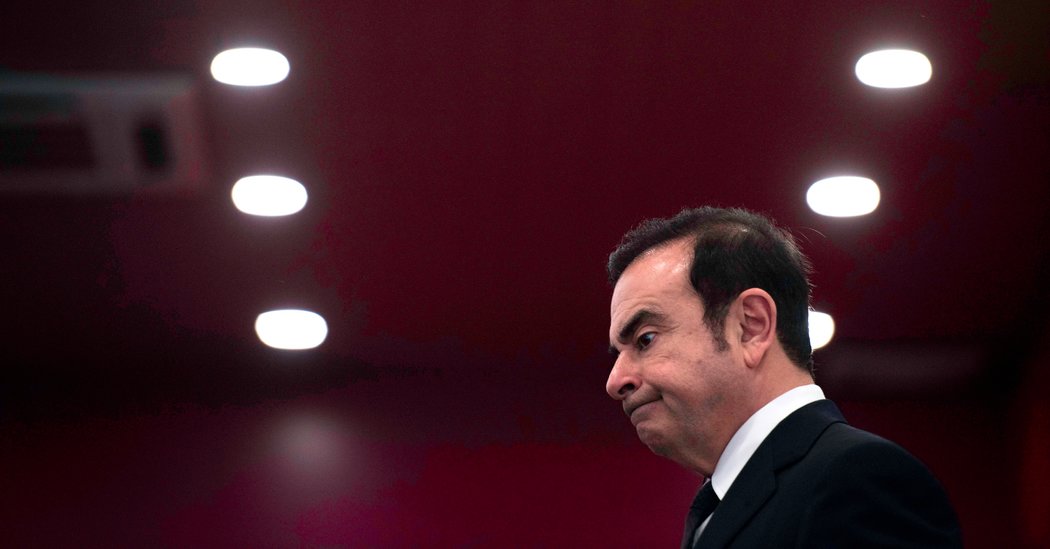 The new allegations raise the stakes in a showdown between Mr. Ghosn, until recently the head of the vast car-making alliance of Nissan, Renault and Mitsubishi, and the prosecutors, who have been working in tandem with whistle-blowers inside Nissan. It also signals that prosecutors remain undeterred by Mr. Ghosn’s recent assertion of innocence in court.

Mr. Ghosn’s lawyers said they had applied for his release on bail, but the court was not expected to rule until at least Tuesday and could still choose to hold the executive for months.

Mr. Ghosn, his top aide Greg Kelly and Nissan are now charged with understating Mr. Ghosn’s income through March 2018, according to a statement from the Tokyo District Court. Mr. Ghosn was also charged with improperly transferring personal losses to Nissan’s books in 2008.

Mr. Ghosn has been detained since November, when prosecutors seized him shortly after his corporate jet touched down at a Tokyo airport. He was later indicted, along with Mr. Kelly and Nissan itself, on suspicion of withholding millions of dollars in income from Nissan financial filings between 2011 and 2015, when he was both chairman and chief executive of the company. Mr. Kelly, who suffered from spinal stenosis, was released on bail on Christmas Day after 30 days in detention so that he could undergo surgery in Tokyo.

Now, Mr. Ghosn has been ousted as chairman by both Nissan and Mitsubishi, though he remains on Nissan’s board, throwing the alliance into turmoil. Hiroto Saikawa, Nissan’s chief executive and a one-time protégé of Mr. Ghosn, has rebuked his former boss, describing him as a “mastermind” of a long-running scheme to mislead financial authorities. Mr. Saikawa has not been accused of any crime.

On Friday, Nissan said in a statement submitted to prosecutors that the company had been harmed by Mr. Ghosn’s conduct, alleging that the former chief had engaged in the “misuse of a significant amount of the company’s funds.”

The company added, “Nissan does not in any way tolerate such misconduct and calls for strict penalties.”

Mr. Ghosn has denied the allegations, declaring at his first appearance at a court proceeding on Tuesday that he had been “wrongly accused and unfairly detained based on meritless and unsubstantiated accusations.”

Mr. Ghosn’s lawyers said Friday that they expected the court to rule on their bail request Tuesday after a long holiday weekend. Motonari Otsuru, Mr. Ghosn’s lead lawyer in Tokyo and a former top prosecutor, has speculated that the authorities will seek to deny bail and that the executive’s detention could stretch for months as the two sides head to court.

If the local court declines the bail request, Mr. Ghosn can legally be held for two more months. After that, prosecutors are entitled to request one-month extensions.

Ostensibly, bail could be denied on the grounds that as long as Mr. Ghosn continues to assert his innocence, he could flee the country or seek to destroy evidence, said Nobuo Gohara, a defense lawyer and former prosecutor who is critical of Japan’s criminal justice system.

But he said that such concerns were unfounded, because the Japanese authorities could easily block Mr. Ghosn from leaving the country and evidence has already been seized.

Still, “until suspects admit to their crimes, they are usually held,” Mr. Gohara said. “It’s like they are being held hostage.”

Yet Mr. Kelly was released; as a condition of his bail, he is not allowed to leave Japan. His lawyer, Yoichi Kitamura, said he had rented an apartment on his client’s behalf. Mr. Kelly’s wife, Donna Kelly, was in Tokyo for Mr. Kelly’s surgery and is staying with him in the apartment, Mr. Kitamura said.

Mr. Ghosn’s detention has cast a critical light on Japan’s criminal justice system. Mr. Ghosn — who has been formally arrested three times, prolonging his detention — has faced interrogation without a lawyer, and so far he has been permitted to see only diplomats or his Japanese lawyer.

On Thursday, Mr. Ghosn came down with a fever, his local counsel said, raising concerns over the 64-year-old executive’s health. He was allowed to rest for a day on advice from government doctors, and his temperature was back to normal Friday morning, according to an update from his attorneys.

Mr. Ghosn’s wife, Carole Ghosn, who has not seen her husband since his arrest, issued a plea on Thursday for more information on his condition.

“I am pleading with the Japanese authorities to provide us with any information at all about my husband’s health,” she said from Paris, where the couple maintains a home. “We are fearful and very worried his recovery will be complicated while he continues to endure such harsh conditions and unfair treatment.”

Mr. Ghosn and Mr. Kelly were initially indicted on charges of understating Mr. Ghosn’s earnings from April 2010 to March 2015 by half in securities filings. On Friday, prosecutors added charges that the two also understated Mr. Ghosn’s compensation by more than half between April 2015 and March 2018.

Across the entire period, the two are accused of understating Mr. Ghosn’s compensation by about $83 million. They say he reported compensation of 7.9 billion yen, or $73.2 million, compared with actual compensation of ¥17 billion, or $156.9 million.

Mr. Ghosn’s lawyers have argued that the deferred amounts were not fixed commitments and did not need to be disclosed. Mr. Kelly has denied wrongdoing as well.

Mr. Ghosn is further accused of temporarily transferring investment losses he faced during the global financial crisis of 2008 onto Nissan’s books, which prosecutors say violates Japanese corporate law. His attorneys said that the transactions were legitimate and approved by the company’s board, and that they didn’t lead to losses for the company.

The events have shaken foreign businesspeople in Japan, who have closely scrutinized both the accusations and the justification for keeping him in jail.

Stephen Givens, an American corporate lawyer in Japan who has been following the case, said the charges hinged on what he called overly technical interpretations of Mr. Ghosn’s and Nissan’s intentions, and whether Nissan had guaranteed that the deferred compensation promised to the auto chief would be paid out.

In the case of the alleged transfer of losses, Mr. Givens said, the prosecution appears to be scrutinizing whether a board resolution approving Mr. Ghosn’s transactions was drafted in a sufficiently precise way.

“My God,” he said. “Whether you are in jail or not depends on those two issues?”

A bold corporate leader who had celebrity status in Japan for turning Nissan around nearly two decades ago, Mr. Ghosn, a Brazilian-born, Lebanese- and French-educated engineer, presided until recently over a global auto empire selling more than 10 million cars a year.

His children have said they believe the accusations are part of a revolt within Nissan against a possible merger with Renault that could give the French manufacturer — and its largest shareholder, the French government — a more dominant role in the alliance.

On Thursday, Renault said its review of its executives’ compensation for 2017 and 2018 had uncovered no wrongdoing. The company is still reviewing executive pay for previous years, it said in a statement. Mr. Ghosn remains Renault’s chairman and chief executive.

In a separate statement, Nissan said its board had “re-emphasized its commitment” to the alliance with Renault and Mitsubishi at a meeting Thursday at Nissan’s headquarters in Yokohama. The automaker also announced a number of interim steps to bolster its corporate governance.