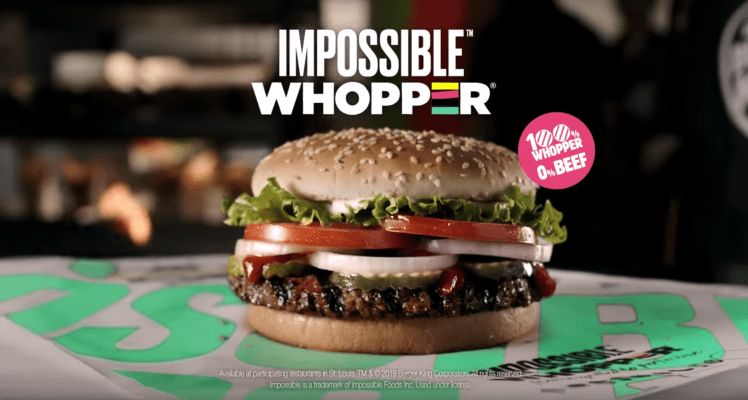 The Impossible Whopper’s debut at Burger King as gone from a not-April-Fool’s-joke to a nationwide rollout by year-end.

Originally launched on April 1st at 58 restaurants in St. Louis, the Impossible Burger will be on Burger King menus in additional markets soon and will be available at every Burger King by the end of the year, according to multiple reports.

For Burger King, the roll out of the Impossible Burger enabled the company to snag new customers while not eating into its core business of selling Whoppers.

It’s about optionality, and the ability to “give somebody who wants to eat a burger every day, but doesn’t necessarily want to eat beef everyday, permission to come into the restaurants more frequently,” Chris Finazzo, president of Burger King North America, told CNN Business when discussing the initial test.

Burger King has sold vegetarian patties for a while (from Morningstar), but the addition of the Impossible Foods burger to its national lineup makes the company the largest national fast food chain to embrace alternative proteins (a growing consumer category).

News of the Impossible Burger’s impossibly well received debut in St. Louis was a bright spot in what would otherwise be a fairly downbeat earnings call, for Burger King’s parent company, Restaurant Brands (its first quarter net income fell 9% to $135 million on weaker same-store sales growth), according to a report by the Associated Press.

Meat substitutes are expected to reach $6.43 billion by 2023, according to a report by Markets and Markets. Venture capitalists, corporate investors and public markets are all hungry for alternative meat companies and the nationwide rollout of the Impossible Foods burger coupled with the Beyond Meat public offering indicate that the industry is maturing.

Both companies are at the vanguard of experiments with alternatives to animal-based proteins in foods, but several others are waiting in the wings. A recent survey of corporate investments by Crunchbase reveal just how much attention corporate investors are paying to the meat market.

“You think of food-tech and ag-tech 1.0, these were technologies that were primarily beneficial to the producers,” Rob Leclerc, founding partner at AgFunder, an agrifood venture investment platform, told Crunchbase. “This new generation of companies are really more focused on what does the consumer want.”

That distinction goes to White Castle.