Britain’s Theresa May Faces Leadership Vote in Her Conservative Party 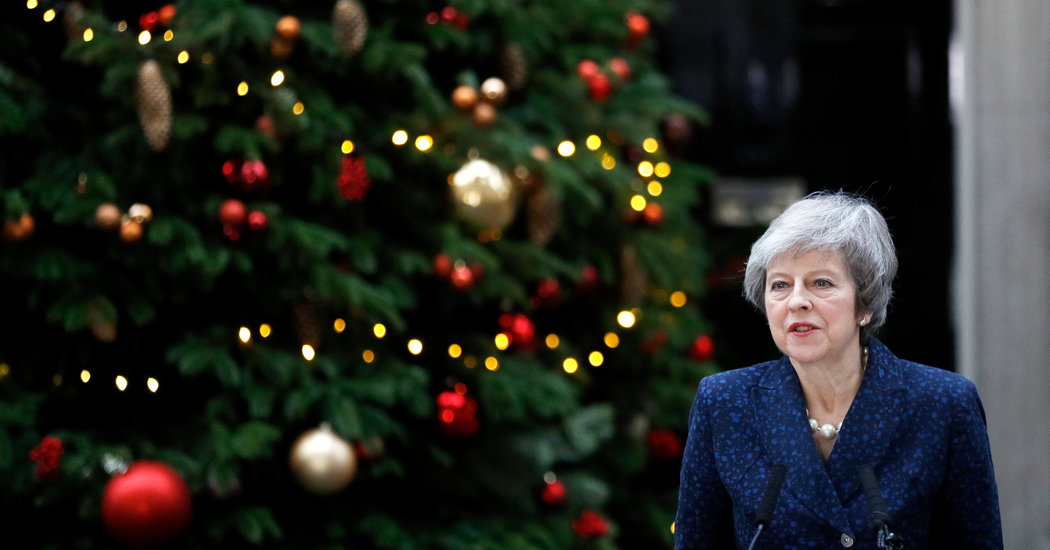 LONDON — Britain’s beleaguered prime minister, Theresa May, will face a no-confidence vote on Wednesday within her own Conservative Party, as lawmakers upset with her handling of Britain’s withdrawal from the European Union seek to topple her from power.

Graham Brady, the chairman of the backbench 1922 committee of Conservative lawmakers, announced Wednesday morning that he had received letters of protest from more than 48 Conservative members of Parliament, the number needed under party rules to trigger a vote on her leadership. He said the contest would take place Wednesday evening.

Mrs. May has been battered from multiple directions by her management of the European Union withdrawal, or Brexit. In particular, many hard-line Brexit supporters within her party believed she was not making a complete enough break with the bloc.

In recent days, she suffered two embarrassing setbacks in Parliament. Last week, the House of Commons voted her in contempt of Parliament — the first time any prime minister had been censured in that way — for failing to release the advice her government’s lawyers had given on Brexit.

And on Monday, she postponed a vote on the Brexit agreement she had negotiated with the European Union, acknowledging that “if we went ahead and held the vote tomorrow the deal would be rejected by a significant margin.” In fact, lawmakers say views on the topic, which has dominated British politics for nearly three years, are so fragmented that no approach has majority support in Parliament, and probably not among Conservatives, either.

A defiant Mrs. May appeared Wednesday morning outside 10 Downing Street, the prime minister’s official residence, to argue that the only beneficiaries of a vote of no confidence would be the opposition Labour Party.

“I will contest that vote with everything I’ve got,” she said.

“A change in leadership in the Conservative Party now will put our country at risk and create uncertainty when we can least afford it,” she added. “Weeks spent tearing ourselves apart would only create more division, when we should be standing together.”

Under the party’s rules Mrs. May needs to win 158 votes from among the 315 Conservative members of Parliament to remain as party leader and therefore prime minister. If she does so, then party members cannot mount another challenge to her leadership for a year. If she lost the vote, then the party would choose another leader over the coming weeks, and Mrs. May would not be eligible to compete for the position.

In a statement Mr. Brady said the “threshold of 15 percent of the parliamentary party seeking a vote of confidence in the leader of the Conservative Party has been exceeded,” and that in accordance with the party’s rules, a ballot will be held Wednesday evening in Parliament.

The move comes at a critical time for Brexit, with European Union leaders scheduled to discuss the matter at a meeting on Thursday and Friday. Under current law, Britain is scheduled to leave the bloc on March 29 and if there is no agreement on terms for an orderly withdrawal, it could suffer a chaotic and economically damaging abrupt exit.

The disarray in London has undermined the British pound, which has fallen sharply against the dollar and the euro in recent weeks.

Mr. Brady told the BBC that he had informed Mrs. May about the 48 letters on Tuesday evening by phone. She will have the opportunity to address Conservative Party members before they cast their ballots, he said, adding that Mrs. May had pressed to hold the vote quickly because of the imminence of Thursday’s European Union summit meeting.

If she loses the confidence vote, Mrs. May could in theory remain as prime minister until a successor as Conservative Party leader were selected.

David Gauke, the justice secretary, warned pro-Brexit lawmakers that if she were ousted, it would increase the risk that Britain would have to postpone its departure from the European Union. He argued that a successor would not be chosen until the end of January or early February, after the date at which the Brexit deal is expected to return to Parliament for the critical vote.

“It would be an act of self-indulgence to remove her as leader of the Conservative Party at this point,” Mr. Gauke told the BBC.

Mrs. May made the same point, arguing that whoever succeeded her would not have time to negotiate a new withdrawal agreement by March 29, and so “one of their first acts would have to be delaying or even rescinding” Britain’s exit from the union.

Others believe a contest could be held more quickly.

Significantly, Wednesday’s vote will be conducted by secret ballot, which suggests that protestations of loyalty, even from cabinet ministers who took to Twitter to state their support, cannot be taken at face value.

Pro-Brexit lawmakers have been threatening to unseat Mrs. May for months but last month failed to muster the 48 no-confidence letters, in part because of worries that the prime minister might win and that it could actually strengthen her.

But faith in Mrs. May has ebbed after Monday’s damaging decision to avoid a parliamentary vote on Brexit, which drew condemnation from Conservatives as well as opposition parties.

Now that a vote is scheduled, the psychology is likely to change because the question will be whether or not lawmakers want to keep Mrs. May for at least a year — one during which a general election could take place. Last year Mrs. May called a general election but lost her parliamentary majority after a campaign which was widely criticized.

If a majority of Conservative lawmakers were to force her out, then in a round of ballots, they would narrow the candidates to succeed her down to two. The winner would then be chosen from those two contenders by the party’s members.