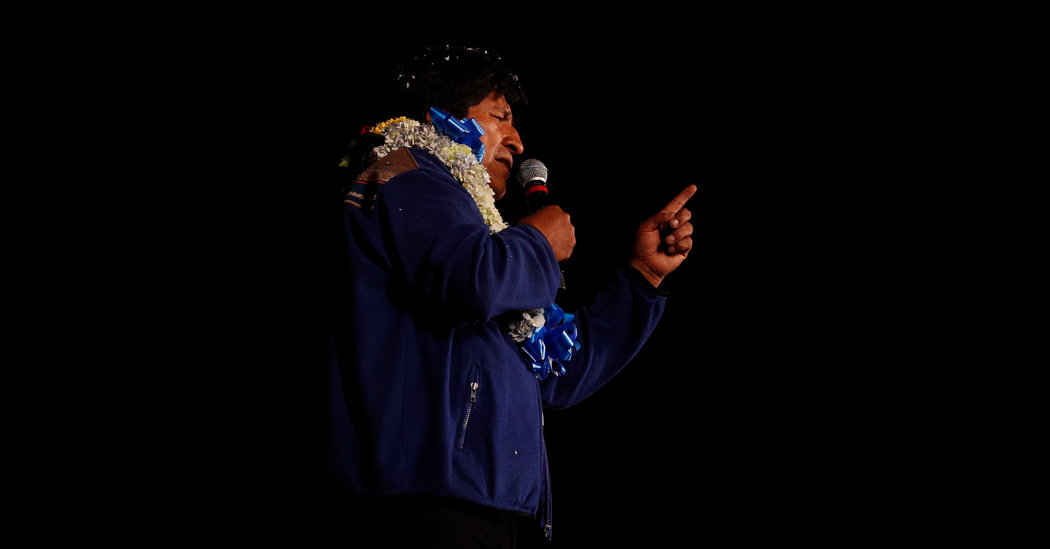 LA PAZ, Bolivia — President Evo Morales of Bolivia on Sunday appeared to fall short of outright victory in his quest for a fourth consecutive term, giving the opposition a viable chance to defeat him in a December runoff.

Mr. Morales, a firebrand leftist who made history in 2006 when he became the country’s first indigenous leader, failed to secure the 10-point margin of victory he needed to avoid a runoff.

The incumbent had 45 percent of the vote, election officials announced shortly after 8 p.m., with most of the ballots counted. His opponent, Carlos Mesa, a former president, trailed with 38 percent.

Mr. Mesa, 66, called the outcome a “triumph” as he addressed euphoric supporters in La Paz and called on voters who picked other opposition candidates to support him.

It was the first time Mr. Morales did not win outright in the first round of an election, and the setback came after a campaign in which the choice before voters was starkly laid out in graffiti scrawled all over the capital.

Mr. Morales, whose 15 years in power make him Latin America’s longest-serving president, was lionized in messages that proclaimed, “Evo is the future.”

But across La Paz, critics tagged walls with a counterview: “Evo is a dictator.”

Mr. Morales, 59, a former coca farmer and firebrand union leader, stunned his compatriots in 2005 when he was elected Bolivia’s first indigenous president. He earned global acclaim for bringing indigenous people into the political mainstream in a country where they had long been treated as second-class citizens.

And despite coming into office with no executive experience or knowledge of economics, Mr. Morales has been credited with lifting millions out of poverty and drastically narrowing the wealth divide as Bolivia has reaped the benefits of a commodities boom that turbocharged growth.

Raúl Madrid, a professor of government and Latin American politics at the University of Texas at Austin said Mr. Morales, who was among a tide of leftist leaders who rose to power around the same time, oversaw a remarkable process of social inclusion and averted the economic mistakes that doomed other socialist leaders.

“Certainly the political incorporation of the indigenous population is a positive achievement,” Dr. Madrid said. But, he added, “On balance, I would have to say that he has weakened democracy in Bolivia.”

Many Bolivians have soured on Mr. Morales, who has been elected three times in landslides. In recent weeks, opponents have taken to the streets across the country in unprecedented numbers to protest what they see as his increasingly authoritarian style. They also denounce the president’s latest re-election bid as unconstitutional.

Mr. Morales sought in 2016 to do away with term limits established in the Constitution by putting forward a referendum that he narrowly lost. After initially vowing to respect voters’ will, the next year he got the Constitutional Court to allow him to run again, based on a controversial ruling that term limits infringe on basic human rights.

“Morales’s bid is an undemocratic act that trashes the Constitution,” his main rival, Mr. Mesa, said this past week. “It can’t be considered to be in keeping with democratic norms.”

Now, the runoff election gives Bolivia’s fractious and weak opposition a chance to band together and possibly defeat the president in December.

To win outright on Sunday, Mr. Morales needed to win at least 40 percent of the vote and lead his closest opponent by at least 10 percentage points.

One voter, Marta Albarracín, 55, a businesswoman in La Paz, said Mr. Morales had made significant achievements. But she said it was time for a change.

“What’s at stake for me today is democracy itself,” she said. A fourth mandate for Mr. Morales, she said, “would represent a rupture with the rules of our democracy.”

The president has anointed himself as an indispensable force to transform Bolivia into a prosperous socialist state. His image has become ubiquitous across the country as the government has painstakingly built a cult of personality.

Mr. Morales keeps a strenuous travel schedule to attend ribbon-cutting ceremonies for infrastructure and housing projects across the country, which are often presented as tokens of his generosity for Bolivians. He spends lavishly in strongholds of support while punishing political rivals by directing allies in the judiciary to open criminal inquiries that have ensnared scores of opponents in protracted legal battles.

“Evo has undergone a type of metamorphosis from the days when he was a charismatic union leader,” said Rolando Villena, a Morales critic who from 2010 to 2016 led a state institution tasked with guarding human rights. “He suffers from delusions of grandeur and seeks to convince people that if he is not elected president again the sun will never rise again.”

The economy has slowed down in recent years as the price of natural gas, Bolivia’s main export, has dipped, calling into question the sustainability of the robust system of subsidies that Mr. Morales has used to spread wealth. The downturn has subjected Mr. Morales to criticism for building a lavish new 29-story presidential building with a helipad in central La Paz and a $7 million museum that pays tribute to his legacy.

Mr. Morales has also come under fire for policies favoring the agricultural sector, which contributed to a rash of fires in August and September that reduced millions of acres of forest to ashes.

As he campaigned in recent days, Mr. Morales begged his supporters not to “abandon me” and warned that an electoral loss would be catastrophic for poor Bolivians.

“To vote for the right is to return to the past,” he told supporters at a campaign event in El Alto, the teeming hillside municipality that looks over La Paz. “We are convinced that we will trounce those who would sell the motherland.”

“Before, we used to suffer so much,” Ms. Cusi said as she knitted a pocket for her brown wool sweater. “There was so much discrimination, but now we walk proud and free.”

While acknowledging the positive aspects of Mr. Morales’s tenure, many young Bolivians say the country desperately needs to turn the page. Walter Alanez, 23, a tourism student, said he worried that Mr. Morales had taken on too much Chinese debt and wasted money on questionable projects that opened the door for widespread corruption.

“In the future, we’re going to find ourselves in an economic crisis,” he said.

Mr. Villena said the president might live to regret having failed to groom and empower possible successors.

“If he wins, he will have destroyed democracy” he said, “and his will be the legacy of a dictator.”