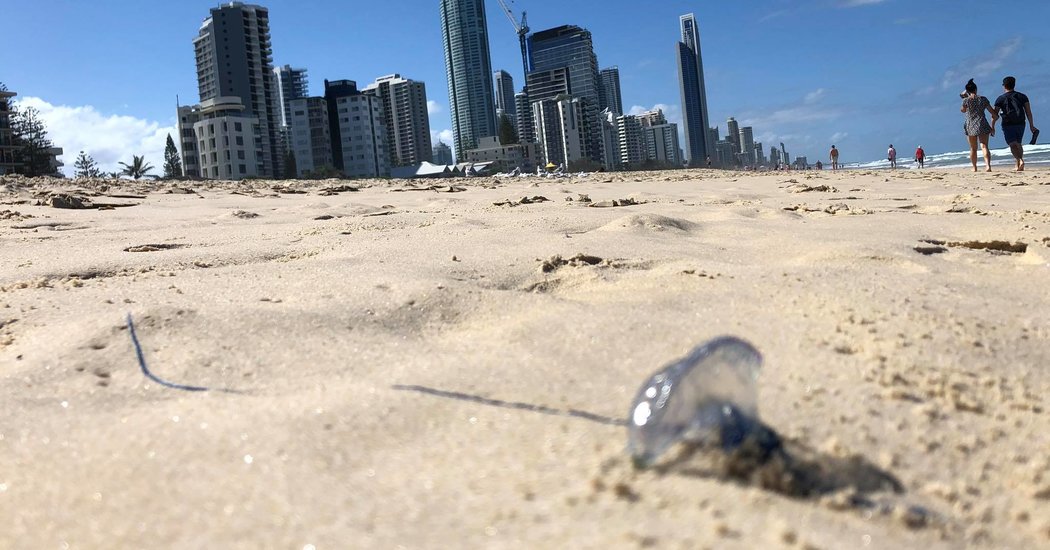 MELBOURNE, Australia — Swarms of bluebottle jellyfish stung thousands of beachgoers on Australia’s east coast over the weekend, forcing officials to close a number of beaches in what they described as a “relentless” influx of the creatures.

For beachgoers, it has been a painful introduction to Physalia utriculus. More than 3,500 stings were reported this past weekend alone, according to Surf Life Saving Queensland, the aquatic rescue authority.

A whopping 3,595 people were stung by #bluebottles over the weekend. Due to the northeasterly winds, we will continue to see bluebottles hanging around. If stung, ensure you see a lifeguard to be treated with ice or hot water.

“We haven’t seen that amount of stings over the weekend in a very long period of time,” said Calan Lovitt, Queensland’s lifeguard coordinator.

There have already been 22,787 recorded stings since the beginning of Australia’s summer on Dec. 1, compared with 6,831 for the same period last year, the authority said.

While the strong winds are not unusual for this time of year, the sheer number of jellyfish has led some scientists to wonder whether climate change might be at least in part to blame for the invasion, as jellyfish tend to thrive in warmer waters.

But Kylie Pitt, the head of marine science in the School of Environment and Science at Griffith University in Queensland, said there was “remarkably little research done on bluebottles,” making it difficult to attribute arrival of the jellyfish to climate change.

Another explanation for the spike in injuries, one expert said, could be the presence of the rare giant multitentacled bluebottle — which delivers an excruciating sting.

“It tends to appear only every 10 to 30 years,” Lisa-ann Gershwin, a research scientist at the Commonwealth Scientific and Industrial Research Organization, told the Australian Broadcasting Corporation.

Farther north, there has also been an increase in injuries from the potentially deadly (and near-invisible) Irukandji, whose sting is said to deliver intense lower back pain, vomiting, cramps, sweating and a sense of impending doom.

While some scientists are not ready to draw a line from climate change to the bluebottle invasion, they do agree that a spike in jellyfish populations worldwide is probably a sign that there is something wrong with the ocean.

“The prevalence of jellyfish, especially in particular locations, can be a real signal of an ecosystem that’s not functioning properly,” said Juli Berwald, a marine research scientist based in Austin, Tex. She said that warming waters, overfishing and even pollution had helped some types of jellyfish thrive.

The sting of a bluebottle jellyfish is usually not fatal. Some people do experience allergic reactions, however, which had resulted in a number of hospitalizations over the weekend, the surf lifesaving club told local media.

Mr. Lovitt said that people who are stung should remove the tentacles from the skin immediately before cleaning the area with seawater. Very warm water, he said, should be used to neutralize the pain. Ice can also be used to numb the area.