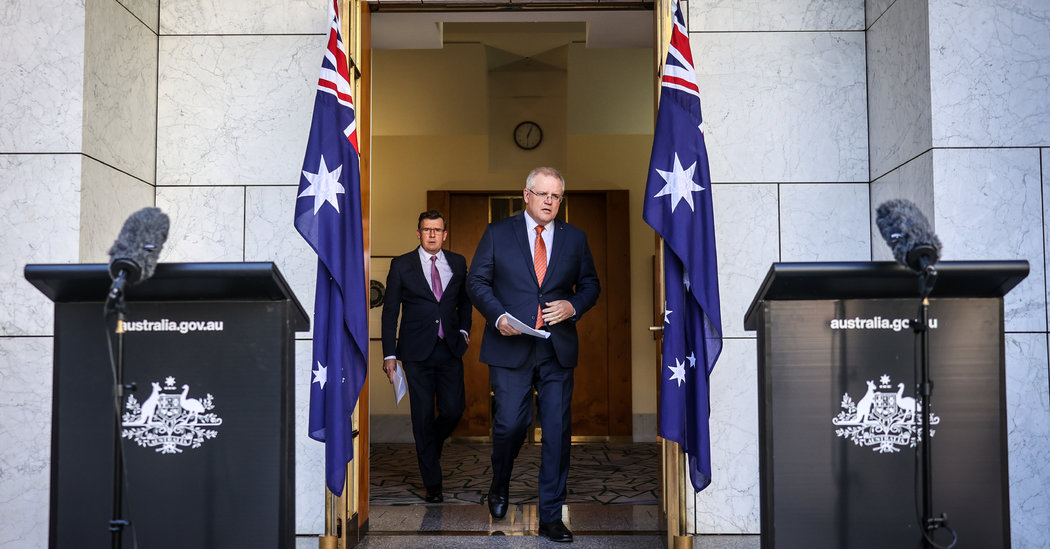 HONG KONG — Australia will suspend its extradition agreement with Hong Kong because of the new national security law imposed by China and extend temporary visas for Hong Kongers in the country, Prime Minister Scott Morrison said on Thursday.

The announcement, which came on the heels of Canada’s suspension of its extradition treaty with Hong Kong and Britain’s statement that it was considering a similar move, threatened to deepen the diplomatic tensions between Canberra and Beijing.

Mr. Morrison said Australia’s visa extension for people from Hong Kong who are already in the country would allow them to stay for an additional five years and open a path to permanent residency. He also suggested businesses should move from Hong Kong to his country, declaring, “We are a great immigration nation.”

Australia also updated its advice to citizens about traveling to Hong Kong, citing questions about the interpretation of the security law and the risk of Australians being sent to mainland China for prosecution.

“You may be at increased risk of detention on vaguely defined national security grounds,” Australia’s travel advice states. “You could break the law without intending to.”

The announcements were the latest in a series of moves by countries in response to a law that has drastically increased the role of Beijing’s security services in Hong Kong, a semiautonomous former British colony that returned to China in 1997. It raised fears that Beijing would curb free speech, the ability to assemble and other rights that have traditionally been better protected in Hong Kong than in mainland China.

Mr. Morrison said Australia’s decisions were in response to the potentially sweeping effects of the new security law imposed on Hong Kong.

“Our government, together with other governments around the world, have been very consistent in expressing our concerns about the imposition of the national security law on Hong Kong,” Mr. Morrison said. “Today we have agreed to announce that that national security law constitutes a fundamental change of circumstances in respect to our extradition agreement with Hong Kong.”

He said that the government was not expecting large numbers of new applications from Hong Kong, and the application and approval processes would remain unchanged.

Australia’s move is not as sweeping as Britain’s decision to open a path to citizenship for as many as three million Hong Kongers. But the announcement reflected global concern about China’s new law for the territory. New Zealand’s government also said on Thursday that it would review the country’s relationship with Hong Kong.

Taiwan, where several participants in Hong Kong’s protest movement have fled over the past year, has also established an office to help Hong Kongers.

The Chinese Embassy in Canberra denounced Australia’s move over Hong Kong. “We urge the Australian side to immediately stop meddling in Hong Kong affairs and China’s internal affairs,” it said in a statement, adding, “Otherwise it will lead to nothing but lifting a rock only to hit its own feet.”

“Hong Kong is facing something hopeless and dreadful,” said Sunny Cheng, a representative for the Association of Hong Kongers in Western Australia. “We are really grateful that Australia offers a helping hand in this really difficult period of time.”

Extending incentives for Hong Kong businesses to establish themselves in Australia would help rebuild Australia’s economy in turn, he added.

“We are hardworking. We can help to rebuild,” Mr. Cheng said.