At a School for Suicide Bombers’ Children, Dancing, Drawing and Deradicalization 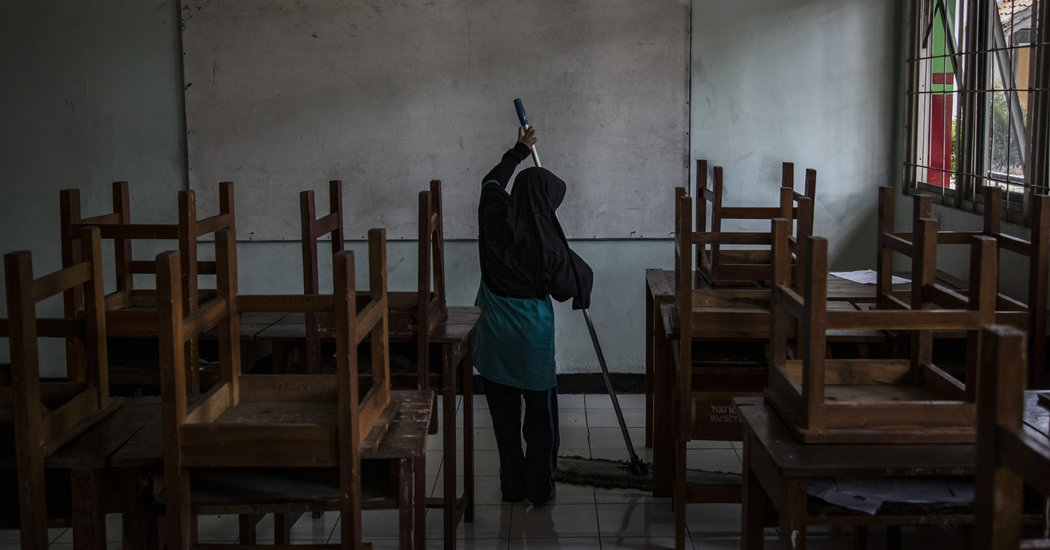 MEDAN, Indonesia — Ais likes to dance. She knows the words to “I’m a Little Teapot.” Her dimples are disarming.

Her parents didn’t want their daughter to dance. They didn’t want her to sing. They wanted her to die with them for their cause.

Last year, when she was 7, Ais squeezed onto a motorcycle with her mother and brother. They carried a packet that Ais refers to as coconut rice wrapped in banana leaves. Her father and other brother climbed onto a different bike with another parcel. They sped toward a police station in the Indonesian city of Surabaya, a place of mixed faith.

The parcels were bombs, and they were set off at the gate to the police station. Catapulted off the motorcycle by the force of the explosion, Ais rose from the pavement like a ghost, her pale head-to-toe garment fluttering in the chaos. Every other member of her family died. No bystanders were killed. The Islamic State, halfway across the world, claimed responsibility for the attack.

Ais, who is being identified by her nickname (pronounced ah-iss) to protect her privacy, is now part of a deradicalization program for children run by the Indonesian Ministry of Social Affairs. In a leafy compound in the capital, Jakarta, she bops to Taylor Swift, reads the Quran and plays games of trust.

Her schoolmates include children of other suicide bombers, and of people who were intent on joining the Islamic State in Syria.

Efforts by Indonesia, home to the world’s largest Muslim population, to purge its society of religiously inspired extremism are being watched keenly by the international counterterrorism community. While the vast majority of Indonesians embrace a moderate form of Islam, a series of suicide attacks have struck the nation, including, in 2016, the first in the region claimed by the Islamic State, also known as ISIS.

Now, with hundreds of Islamic State families trying to escape detention camps in Syria amid Turkish incursions into Kurdish-held territory, the effort has taken on more urgency. The fear is that the Islamic State’s violent ideology will not only renew itself in the Middle East, but may also metastasize thousands of miles away in Indonesia.

There are signs that it is already happening.

Last week, a man whom the police linked to ISIS wounded the Indonesian security minister, Wiranto, in a stabbing. Since then, at least 36 suspected militants who were plotting bombings and other attacks have been arrested in a counterterrorism crackdown, the police said this week.

Hundreds of Indonesians went to Syria to fight for ISIS. In May, the police arrested seven men who had returned from the country and who, the police say, were part of a plot to use Wi-Fi to detonate explosive devices.

The risks, however, are not limited to those who have come back. Indonesians who never left the region are being influenced by the Islamic State from afar.

In January, an Indonesian couple who had tried but failed to reach Syria blew themselves up at a Roman Catholic cathedral in the southern Philippines. More than 20 were killed in the attack, which was claimed by the Islamic State.

In Indonesia, there are thousands of vulnerable children who have been indoctrinated by their extremist parents, according to Khairul Ghazali, who served nearly five years in prison for terrorism-related crimes. He said he came to renounce violence in jail and now runs an Islamic school in the city of Medan, on the island of Sumatra, that draws on his own experience as a former extremist to deradicalize militants’ children.

“We teach them that Islam is a peaceful religion and that jihad is about building not destroying,” Mr. Khairul said. “I am a model for the children because I understand where they come from. I know what it is like to suffer. Because I was deradicalized, I know it can be done.”

Despite the scale of the country’s problem, only about 100 children have attended formal deradicalization programs in Indonesia, Mr. Khairul said. His madrasa, the only one in Indonesia to receive significant government support for deradicalization work, can teach just 25 militant-linked children at a time, and only through middle school.

“The children are not tracked and monitored when they leave,” said Alto Labetubun, an Indonesian terrorism analyst.

The risks of extremist ideology being passed from one generation to the next are well-documented, and a number of Indonesians linked to the Islamic State are the offspring of militants.

The son of Imam Samudra, one of the masterminds of the 2002 bombing on the island of Bali that killed 202 people, was 12 when his father was executed in 2008. He joined the Islamic State and died in Syria at 19.

Mr. Khairul, whose father and uncles were members of a militant organization, said he understood the pull of family obligation. He was sent to prison in 2011 for armed robbery and for planning an attack on a police station. Before his conviction, Mr. Khairul taught four of his 10 children to fire weapons.

“Deradicalizing my own children was very difficult,” he said. “My wife and my children looked at me very strangely when I got out of prison because I had changed.”

Some of the children under Mr. Khairul’s care were taught to assemble bombs by family members. The parents of about half the students were killed in armed conflict with the Indonesian counterterrorism police.

“It’s natural for the children to want revenge for their parents’ deaths,” he said. “They were taught to hate the Indonesian state because it is against the caliphate.”

When Indonesia achieved independence in 1945, religious diversity was enshrined in the Constitution. About 87 percent of Indonesia’s 270 million people are Muslims, 10 percent are Christian, and there are adherents of many other faiths in the country.

A tiny fraction of the Muslim majority has agitated violently for a caliphate that would arc across Muslim-dominated parts of Southeast Asia. The latest incarnation of such militant groups is Jamaah Ansharut Daulah, considered the Indonesian affiliate of the Islamic State.

The parents of Ais, who is now 8, were members of a Jamaah Ansharut Daulah cell. Each week, they would pray with other families who had rejected Surabaya’s spiritual diversity.

The day before Ais and her family rode up to the police station in May 2018, another family — mother, father, two sons and two daughters — made their way to three churches in Surabaya and detonated their explosives. Fifteen bystanders were killed. The militant family was extinguished entirely, including the two girls, who went to school with Ais.

Hours later, members of two other families in the prayer group also died, either from shootouts with the police or when explosives hidden in their apartment detonated. The six children who survived the carnage are now in the Jakarta program with Ais.

When they first arrived from Surabaya, the children shrank from music and refrained from drawing images of living things because they believed it conflicted with Islam, social workers said. They were horrified by dancing and by a Christian social worker who didn’t wear a head scarf.

In Surabaya, the children had been forced to watch hours of militant videos every day. One of the boys, now 11, knew how to make a bomb.

“Jihad, martyrdom, war, suicide, those were their goals,” said Sri Wahyuni, one of the social workers taking care of the Surabaya children.

On a recent weekday, however, the children shimmied their way through team-building exercises. During Arabic class, they squirmed. They drew the human figure they had once considered taboo.

But their religious practice remains important. Although it is not required, all seven still fast two days a week to demonstrate commitment to their faith.

“We don’t want to challenge their religion by stopping them,” said Ahmad Zainal Mutaqin, a social worker who also teaches religion classes. “Indonesians respect their elders, and we don’t want them to think their parents were evil.”

Some day soon, these children of suicide bombers will have to leave the government program in which they have been enrolled for 15 months. It’s not clear where they will go, although the ministry is searching for a suitable Islamic boarding school for them.

The children of those who tried to reach Syria to fight get even less time at the deradicalization center — only a month or two. Some then end up in the juvenile detention system, where they re-encounter extremist ideology, counterterrorism experts said.

“We spend all this time working with them, but if they go back to where they came from, radicalism can enter their hearts very quickly,” said Sri Musfiah, a senior social worker. “It makes me worried.”

Irfan Idris, the director of deradicalization for Indonesia’s National Agency for Combating Terrorism, acknowledged that threat, saying there “is not a guarantee” that the minors who have been funneled through government care pose no threat.

Most children of the 1,000 or so people who have been convicted of terrorism-related crimes in Indonesia don’t even have the chance to go through this effort at education and moderation. The government runs the one program in Jakarta and provides support for Mr. Khairul’s madrasa.

“The solution is a very expensive, long-term mentoring program such as takes place with some of the white power youths in Europe, involving schools, social psychologists and attention to families,” said Sidney Jones, the director of the Institute for Policy Analysis of Conflict in Jakarta and an authority on Islamic militancy in Southeast Asia.

But the political commitment to such an extensive effort is lacking in Indonesia.

Mr. Alto, the terrorism analyst, said that even the nascent efforts underway in Indonesia might only be camouflaging the problem.

“Although it seems that they are obedient, it’s a survival mechanism,” he said of the students undergoing deradicalization. “If you were taken prisoner, you will do and follow what the captor told you to do so that you will get food, water, cigarettes, phone calls.”

But, he added, “you know that one day you will come out.”

At the madrasa in Medan, which preaches the dangers of radicalism within a conservative approach to Islam, a row of boys sat on the veranda of a mosque and expounded on their worldview. Dan, 12, agreed with classmates that Indonesia should be an Islamic state.

What of the churches interspersed with the mosques in Medan? Dan, who is also being identified by a nickname to protect his privacy, giggled.

His hands mimicked the shock of an explosion, and he formed a word.

“Bomb,” he said. His laughter stopped.