As Refugees, Their Options Were Limited. Others Saw a Profit. 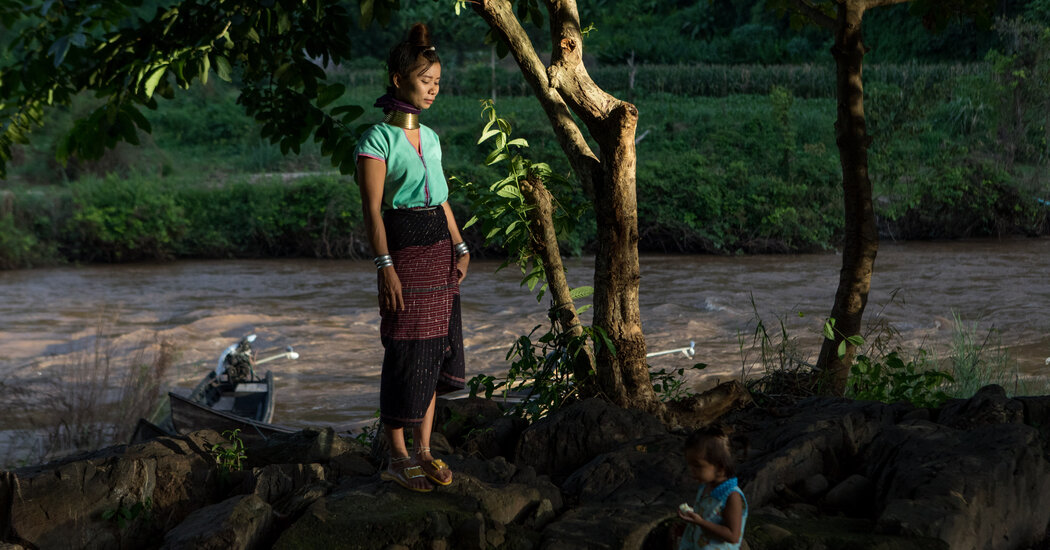 HUAY PU KENG, Thailand — In front of nearly every bamboo home in the village of Huay Pu Keng are stalls selling trinkets related to the neck rings that women from the Kayan ethnic group traditionally wear.

There are cheater versions of the brass coils, with helpful hinges for easy application. There are special pillows for sleeping with the rings, which compress the clavicle and create the illusion of an unnaturally elongated neck.

There are wooden carvings of the women with their neck decorations and something called “long-neck wine,” although, confusingly, the bottles are squat and round.

The entire economy of Huay Pu Keng and other Kayan villages, from local officials to tourism profiteers, depends on the metal adornments clamped around the necks of its women.

The Kayan are a small ethnic minority that fled civil war in eastern Myanmar in the 1980s. When they arrived in Thailand, Thai officials, in concert with a Myanmar ethnic militia that operated in the border area, saw an opportunity: Instead of putting the Kayan in special camps that had been built for the hundreds of thousands of other refugees who were also escaping armed conflict in Myanmar at the time, they would be put in newly built villages designed for maximum tourist visibility.

Once they were set up in the villages, the women were given salaries of up to $200 a month by tour companies. Thais — from boat operators to trinket makers — profited.

Critics have called the villages “ethnic theme parks,” with the Kayan on display as human tourist attractions. Yet for the women and their families, the visitors guaranteed a steady income, even if it meant continuing a tradition that might otherwise have disappeared by the 21st century.

The coronavirus has complicated the situation. Thailand has barred most foreigners to prevent the spread of the virus, and so few tourists now visit this remote corner of the country. And the fate of the Kayan yet again raises uncomfortable questions about cultural exploitation, economic agency and the challenging reality of life as a refugee.

Mu Tae sat at her trinket stall, her head floating above 18 metal loops that made the distance between her chin and her shoulders look impossibly long.

“The government told us to preserve our culture, and we did, but no one is here to see it,” she said.

While the women and their families have profited from visitors to the villages, the neck rings are increasingly a legacy from another century. Even before the pandemic, many women had taken them off. Ms. Mu Tae said she will begin fastening the metal around her daughter’s neck when she reaches 5 years old, but she isn’t sure if the girl will want to continue the Kayan custom into adulthood

It’s not clear why the Kayan, also known as the Padaung, began wearing the coils back in the forests of Myanmar, where they are from. Tourist guides say, with a flourish, that the metal rings were a defense mechanism against tigers who went for the neck. The Kayan seem skeptical of this explanation.

For years, many Kayan lacked official documentation to leave their villages, and they had no hope of emigrating to another country because they were not in the refugee camps.

Those that could venture out, with proper papers, were often in for a shock.

“When I went to school in town, everyone stared so I was embarrassed by the rings,” said Ma Prang, 22, who removed 20 coils four years ago. “I want to be a doctor and I think it will be hard to do that job with rings on.”

About a dozen years ago, though, the Thai government began allowing Kayan in the villages to transfer to the refugee camps so that they could apply for resettlement in a third country. Since then, scores of Kayan have started new lives in Finland, New Zealand and the United States, among other countries. None of the women continue to wear their rings.

Unlike the Kayan in the refugee camps, some residents of the tourist villages have received full Thai citizenship or cards that allow them free movement in the country. But even after decades in the country, other Kayan have not been issued such paperwork, leaving them at the mercy of Thai officialdom.

“I’m not sure why I don’t have an I.D. card,” said Ma Nye, 33, who lives in Huay Sua Tao, the Kayan village most visited by tourists. “My daughters were born in Thailand, but they don’t have cards, either.”

Yothin Thubthimthong, the director of the Tourism Authority of Thailand in Mae Hong Son Province, where the Kayan villages are, said that life in immigration limbo in one of the tourist villages was preferable to living in a refugee camp.

“Though they are not Thais, I believe it’s better than living in the camp with tens of thousands of people,” he said.

In Huay Pu Keng, the Kayan live alongside the Kayaw, another ethnic group known for creating large holes in women’s earlobes. Although both the Kayan and the Kayaw mostly come from Kayah, a state in eastern Myanmar that borders Thailand, they speak different languages and have different customs. They would not have lived together back in Myanmar.

Even before the coronavirus, tourism was declining in Huay Pu Keng and other Kayan villages along the border with Myanmar. Over the past decade, some Kayan families, both from the border villages and Myanmar, have been allowed to relocate to Thai cities, after tour operators recruited them to live in new communities that are more convenient for tourists to visit.

“In Myanmar, I could not work in the city because of my rings,” said Ma Hao, 34, who was hired from Myanmar seven years ago to wear her 28 coils at one of these tourist attractions near the northern city of Chiang Mai. “Here, I could make money just by living.”

But since the coronavirus travel lockdown, the Thai businessmen who used to employ Kayan women like Ms. Ma Hao have stopped paying. Now, she says, she is stuck in Thailand without work, and without enough money to return to Myanmar.

The Long Neck Hill Tribe Village is a collection of bamboo shacks with intermittent electricity constructed by a retired police officer on the outskirts of Chiang Mai. About 50 tourists a day, many of them from China, used to come and pay $15 to see Kayan women and their rings, as well as other ethnic groups, like the Lahu, Akha and Lisu.

These days, the tourist attraction gets only a few visitors. And with no salaries offered, most of the workers have left.

Mu Nan, 22, has lived with her parents at Long Neck Hill Tribe Village for five years. Her mother, Mu Bar, 38, wears 25 rings and is one of the most photographed women in the community. Ms. Mu Nan wears none.

Unlike her parents or her brother, who is a trash collector, Ms. Mu Nan received her Thai citizenship this year, a process that took three years of filling out forms and battling bureaucracy. She is now studying at Chiang Mai University.

“I never got any education at all,” said Ms. Mu Bar, adjusting the cloth under her coils that prevents chafing. “My daughter’s life will be different from mine,” she added. “She can do anything she wants.”