As Next Trump-Kim Summit Nears, Japan Worries U.S. Will Leave It in the Dark 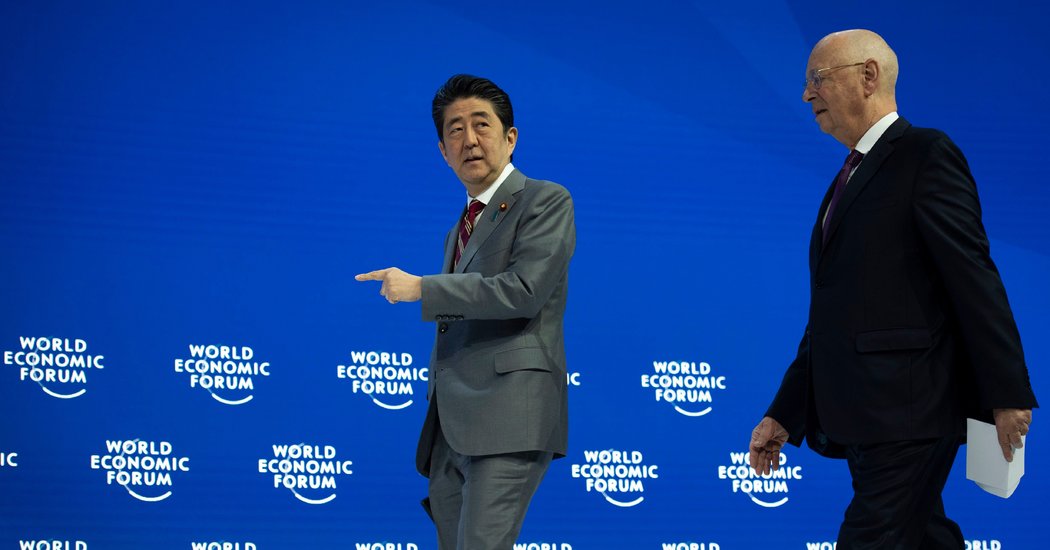 DAVOS, Switzerland — A month before President Trump is scheduled to meet for a second time with Kim Jong-un of North Korea, Prime Minister Shinzo Abe of Japan appealed to Mr. Trump to keep him in the loop as he seeks a disarmament deal with the North.

Mr. Abe, speaking in an interview Wednesday at the World Economic Forum, said he was confident that he was in sync with Mr. Trump on North Korea. But privately, Japanese officials and analysts worry that the American president will make a deal with Mr. Kim that leaves Japan vulnerable to a missile strike from the North.

“I would like to make sure that both of our national security councils, as well as national security advisers and relevant teams, would collaborate as we move forward,” Mr. Abe said, “so that we will be able to meet the goal of denuclearization of North Korea.”

The first time Mr. Trump and Mr. Kim met, in Singapore last June, the two leaders agreed to a vague commitment to work toward the “complete denuclearization of North Korea.” Left unsettled was the status of North Korea’s arsenal of medium- and short-range missiles, which are capable of striking Japan.

Japanese analysts fear that Mr. Trump, in his eagerness for a diplomatic victory after a difficult stretch at home, will agree to a deal under which the North’s freezes its nuclear activities and dismantles its intercontinental ballistic missiles, which are capable of reaching the United States, while leaving its shorter-range rockets intact.

“North Korea knows this is a wedge issue between Tokyo and Washington,” said Yoichi Funabashi, the chairman of the Asia Pacific Initiative, a Tokyo-based research group. “That is very worrisome to people in Tokyo.”

Fears in Japan deepened after Mr. Trump suspended joint military exercises with South Korea after the Singapore summit. Some interpreted that as a precursor to withdrawing American troops from the Korean Peninsula and perhaps from East Asia altogether.

Mr. Trump is pursuing an “opportunistic and transactional policy toward North Korea,” Mr. Funabashi said. That unpredictability, he said, makes Mr. Trump “the No. 1 risk for Japan” in the coming year.

Mr. Abe, who has cultivated Mr. Trump more assiduously than perhaps any other world leader, was at pains not to show any daylight with his friend in Washington. He noted that they met for a “thorough policy consultation” before the Singapore meeting.

“We do continue to have such close coordination and cooperation in dealing with North Korea,” he said. “So I am very confident that when it comes to our awareness and recognition as to North Korea, we’re completely on the same page.”

But Mr. Abe conceded that he and Mr. Trump were unlikely to meet again before the next Trump-Kim summit meeting, which the White House said will happen near the end of February, with Vietnam the most likely site.

Japan’s Parliament is going into session next week, and “I understand that President Trump has been very busy,” Mr. Abe said with a smile, referring to Washington’s stalemate over the government shutdown. He said he expected to speak with the American president by phone.

As closely as he has aligned himself with Mr. Trump, Mr. Abe spoke out at Davos against the protectionist policies of the Trump administration. He also urged Mr. Trump to settle an escalating trade war between the United States and China.

“My strong hope is that the United States and China both have a rational conclusion to their engagement at the end,” Mr. Abe said. “The key is not to try to resolve these issues through bilateral trade measures, but rather by utilizing the international rules.”