As Fires Rage, Australia Sees Its Leader as Missing in Action 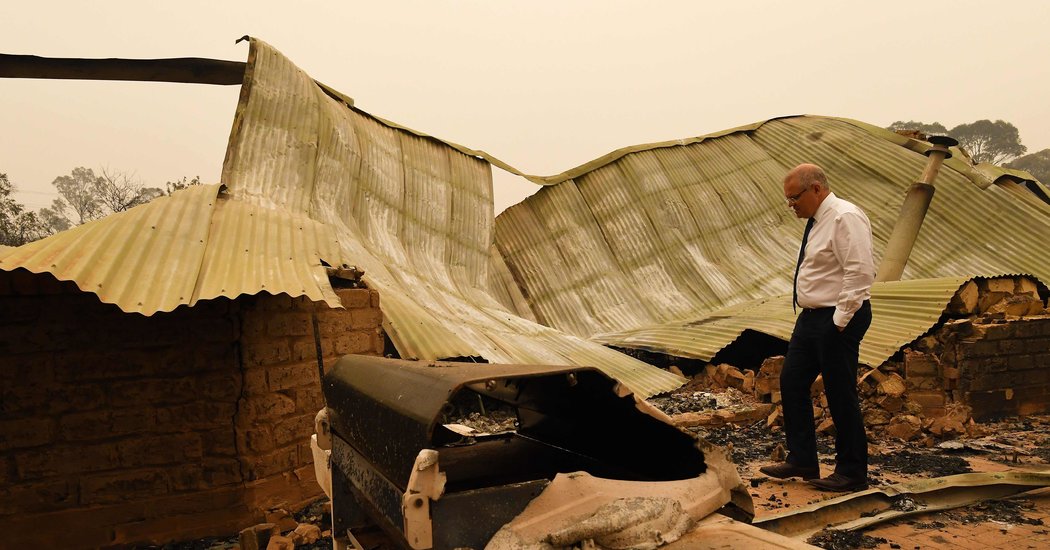 HASTINGS, Australia — The posters have popped up on streets around Australia, showing the prime minister looking very tropical: floral wreath on his head, ocean-blue shirt open at the collar.

“MISSING,” they blared. “Your country is on fire.”

The immediate reference was clear. The prime minister, Scott Morrison, has been widely castigated for taking a vacation to Hawaii last month, and trying to keep it quiet, while Australia was in the early clutches of one of its most devastating fire seasons ever.

But the message went well beyond one island getaway. Angry and frightened, Australians have been venting their frustration with Mr. Morrison over what they see as his nonchalant and ineffectual response to the disastrous blazes and his unwavering dismissal of the force that has made them so intense: climate change.

With thousands fleeing eastern towns this weekend as fires swept from the hills to the coast, the inescapable realities of a warming world were colliding with the calculated politics of inaction.

Mr. Morrison has minimized the connection between climate change and Australia’s extreme environmental conditions, even as the country just completed its hottest and driest year on record. He has derided calls to end coal mining as “reckless,” prioritizing economic interests and loyalty to a powerful lobby. He has opposed taxing heat-trapping emissions or taking other significant steps to reduce them, although a majority of Australians say the government should take stronger action.

And he has signaled no change in his policies even as 24 people have died, hundreds of homes have been destroyed, and more than 12 million acres have burned, an area larger than Denmark. On Sunday, weather conditions eased a bit, with light rain in some areas, but blazes were still burning in Victoria and New South Wales, and some towns were being evacuated.

“The thing that strikes everyone about the present situation is the federal government’s disengagement and lethargy, to put it politely,” said Bill Hare, director of Climate Analytics, a policy institute.

“People are just bewildered,” he added.

As the fire conditions worsened over the weekend, Mr. Morrison defended his government’s response and announced a military mobilization — one that he quickly promoted in a video on social media, drawing widespread criticism. He also denied that his government had played down the links between global warming and changes in Australia’s weather patterns.

“The government has always made this connection, and that has never been in dispute,” he said.

The prime minister said he was undeterred by the anger directed at him. “There has been a lot of blame being thrown around,” he said. “Blame: It doesn’t help anybody at this time, and over-analysis of these things is not a productive exercise.”

Mr. Morrison’s attempt at damage control came as Australians have been voicing a growing sense since November, when the fires arrived early and with far more force than usual, that the government is no longer protecting them in the way it once did.

For much of the time since, the prime minister said that it was not the time to talk about climate change, and that those who did were merely trying to score political points.

But each surge of the flames into crowded suburbs and coastal getaways has presented a fresh test of Mr. Morrison’s defense of the status quo. He has sought to tamp down outrage mostly with photo opportunities and a populist appeal that echoes President Trump. Mr. Morrison has portrayed those who support greater climate action as effete snobs trying to impose their ways on an unwilling quiet majority.

The prime minister published a New Year’s message in newspapers across Australia that pushed back against international pressure for the country to do more.

“Australians have never been fussed about trying to impress people overseas or respond to what others tell us we should think or what we should do,” Mr. Morrison said. “We have always made our own decisions in Australia.”

Critics suggest that his antipathy toward action on climate change has contributed to what they consider a hands-off response to the fires, treating them as a tragedy rather than a turning point.

For months, Mr. Morrison rebuffed calls for a more forceful intervention by the federal government — like a broad military deployment or the largely symbolic declaration of a national emergency — by noting that firefighting had long been the responsibility of individual states. He changed course on Saturday, announcing a call-up of military reservists and new aircraft resources.

The prime minister also initially resisted pressure to compensate the thousands of volunteer firefighters who are performing the overwhelming bulk of the work to protect communities. He later relented, approving payments for each of up to about $4,200, or 6,000 Australian dollars. The decision came a week after he cut his Hawaii trip short and returned to Australia following the deaths of two volunteer firefighters.

Mr. Morrison, who began his professional life in tourism, has been mocked online with the hashtag #scottyfrommarketing. On New Year’s Day, as fire victims surveyed the destruction from the wildfires under orange skies, photos emerged of Mr. Morrison hosting the Australian cricket team in Sydney.

“It reminds me of the George W. Bush moment after Hurricane Katrina in 2005,” said Daniel Flitton of the Lowy Institute, a nonpartisan policy center in Australia. “He seemed to be out of touch, and misread the depths of public concern. That became a lodestone he had to carry for the rest of his term in office.”

More recently, Mr. Morrison has tried to defend Australia’s environmental policies, portraying his government as taking firm action. He said repeatedly in a news conference on Thursday — his first since before Christmas — that the government was on course to “meet and beat” its emission reduction targets.

Climate scientists say those targets were low to begin with. And Australia’s emissions have been rising, while the leadership continues to fight for the right to emit even more.

During United Nations climate talks in Madrid late last year, Australia came under heavy criticism for proposing to carry over credits from the two-decade-old Kyoto Protocol to help it meet its targets under the landmark Paris accord.

“We are laggards,” said Joseph Camilleri, an emeritus professor of politics at La Trobe University in Melbourne, where he specializes in existential threats, including climate change.

“What the Australian fires do best is show us that climate change is now with us here and truly,” he added, “and everyone, including Australia, needs to do an awful lot more than we are doing.”

Australia’s conservative leaders often point out that the country accounts for only a tiny percentage of the world’s heat-trapping emissions. But some experts called the Madrid maneuver a potentially pernicious example from a country that continues to extract and export huge amounts of coal that ends up being burned in power plants around the world.

“The government claims it has reduced emissions,” Mr. Hare said. “What they’re using are essentially accounting tricks to justify or explain their reasoning.”

In his news conference on Thursday, Mr. Morrison framed the government’s climate policy in a way he often has before, as something he will not let get in the way of continued prosperity. He also asked Australians to trust the government and to be patient.

To many, that appeal did not match the gravity of the fear and anxiety coursing through the country.

Jim McLennan, an adjunct professor specializing in bush-fire preparedness at La Trobe University, said that many of the regions affected this season had no recent history of severe bush fires, making it difficult for communities to prepare.

Australians are also emotionally unready, he added, for the extreme future that most likely awaits them. Some scientists say people may have to throng to cities to escape the threat of bush fires.

“I can’t think of a time,” he said, “where we have had so many serious fires occurring in so many different parts of the country at roughly the same time. It is a kind of new world.”

Mr. Morrison may be able to weather the political storms. The next election is two years away, and he is fresh off a surprise electoral victory in which he was buoyed by support in Queensland, a coal-mining center.

But across the country’s heavily populated eastern coast, the public’s patience is nearly exhausted and turning rapidly to fury. Hours after the news conference on Thursday, Mr. Morrison visited a fire-ravaged community, Cobargo, to see the damage and pledge support to residents.

They heckled him out of town. “You left the country to burn,” one person yelled before the prime minister walked away and set off in his car.

In Mallacoota, another devastated community in southeastern Australia where hundreds of people were evacuated by naval ship to the town of Hastings, Michael Harkin, a vacationer from Sydney, said his experience during the fires had intensified his anger toward the government over its inaction on climate change.

The Morrison government, he said, was exhibiting “incompetent governance avoiding the inevitable.”

“They’re not keeping us safe at all,” he added.