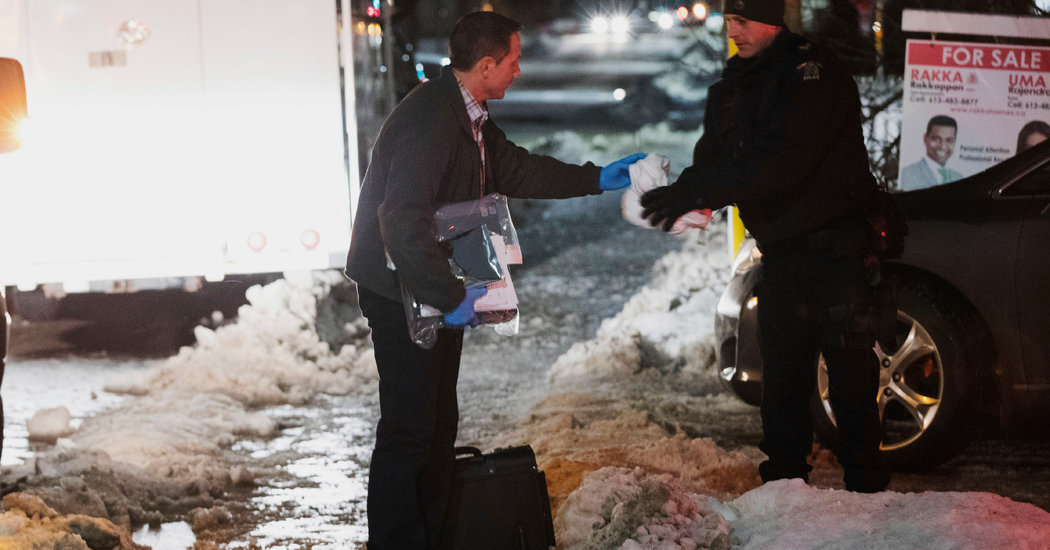 KINGSTON, Ontario — A youth was charged on Friday with “facilitating a terrorist activity” in eastern Ontario and trying to persuade a friend, who is a Syrian refugee, to plant a bomb in a public place. The refugee was released from custody although the possibility of charges against him remain.

The youth who was charged was not identified, and the Royal Canadian Mounted Police would not describe him. But the Canadian Broadcasting Corporation and the Canadian Press news agency identified his friend as Hussam Eddin Alzahabi, 20, one of about 52,000 Syrian refugees who have come to Canada.

Prime Minister Justin Trudeau, who made the Syrians’ resettlement a leading priority of his government, faced questions on Friday about Canada’s openness toward refugees.

With the Syrians’ arrival, Canadians swiftly embraced a program that allows individuals or groups to bring refugees to their country provided that the Canadians are willing to meet all of their needs for at least one year. While the program is a source of pride for many Canadians, Mr. Trudeau’s opponents on the right have long raised concerns that it could leave the country vulnerable.

Though little is known about the bomb plot case, it could fuel a right-wing backlash against refugees similar to that in Germany, which has also admitted large numbers of asylum seekers.

Conservative Party leaders hope to make Mr. Trudeau’s immigration policies an issue in this year’s parliamentary elections, and this episode may give them an opening.

Although he did not mention Mr. Alzahabi by name or discuss his background, Andrew Scheer, the Conservative leader, said in a statement that the arrests made it “clear that Canada’s refugee screening process needs to be seriously examined.”

“Somehow he already knows or is presuming the result of a police investigation,” Mr. Goodale told reporters. “Let’s get the facts on the table and then we’ll determine the appropriate course of action.”

Even by the Mounties’ tight-lipped standards, remarkably few facts were released on Friday about the plot and the people the police said had originated it.

At a news conference, an official of the Mounties, Chief Superintendent Michael LeSage, said that the national police force had received a tip from the F.B.I. in late December that a terror plot was underway in Kingston. About 300 people and a special, low-flying surveillance airplane — which provoked curiosity and irritation among many people in the city — were brought in to aid in the investigation.

Superintendent Peter Lambertucci of the Mounties, who heads one of its counterterrorism units in Ottawa, said that while Mr. Alzahabi and his friend had developed an “attack plan,” they had no target or date. And while the police seized materials that could be components for a bomb, they said the two had not built one. The police would not answer questions about a possible motive or ideology fueling the plot.

Canada’s welcoming attitude toward refugees from Syria’s civil war, which is approaching its eighth year, became a powerful symbol of its openness as a country.

In 2017, Mr. Trudeau famously wrote a tweet saying that Canada was ready to welcome “those fleeing persecution, terror & war.” It came after President Trump moved to ban travelers from several Muslim-majority countries and seemed calculated to present liberal Canada’s embrace of refugees as a counterpoint to the attitude of the Trump administration.

A group of four churches in Kingston sponsored Mr. Alzahabi’s family, said Alex Pierson, the executive director of the Anglican Diocese of Ontario. Citing privacy reasons, he declined to say when the family arrived, other than that it was more than a year ago.

An annual report for one of the churches indicates that Mr. Alzahabi arrived from Kuwait with his father, Amin Alzahabi, his mother and three siblings after their home in Damascus, Syria, was destroyed. Amin Alzahabi, the report said, had been jailed for political reasons and “would be vulnerable to arrest and ‘extreme measures’ should he and the family return home.”

A joint statement by the Anglican and Roman Catholic Churches said that they supported the police in the investigation and that “our concerns, thoughts and prayers are for Kingston and the surrounding area, the faith communities involved, the family and all those affected by this unfortunate situation.”

Amin Alzahabi told the Canadian Broadcasting Corporation that his son liked Canada and the safety it brought the family, and he rejected the idea that his son was plotting an attack.

“I trust my son,” he told the broadcaster, “I know he cannot do anything against any human.”

A 2018 government report on terrorist threats to Canada said that the main one stemmed from individuals or groups inspired by the Islamic State or Al Qaeda. The country was also concerned with threats posed by right-wing extremists.

Since October 2014, Canada’s national terrorism threat level has remained at “medium,” meaning that a violent act of terrorism could occur. Mr. Goodale, the public safety minister, said on Thursday that the latest arrests had not changed that designation.