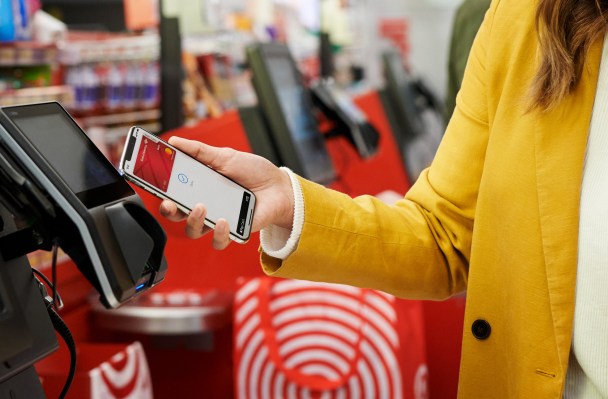 Apple Pay is rolling out to Target stores now, according to Apple, which says it will be available in all 1,850 of its U.S. retail locations “in the coming weeks”.

Also signing up to Apple Pay are fast food chains Taco Bell and Jack in the Box; Speedway convenience stores; and Hy-Vee supermarkets in the midwest.

“With the addition of these national retailers, 74 of the top 100 merchants in the US and 65 per cent of all retail locations across the country will support Apple Pay,” notes Apple in a press release.

Speedway customers can use Apple Pay at all of its approximately 3,000 locations across the Midwest, East Coast and Southeast from today, according to Apple; and also at Hy-Vee stores’ more than 245 outlets in the Midwest.

It says the payment tech is also rolling out to more than 7,000 Taco Bell and 2,200 Jack in the Box locations “in the next few months”.

Back in the summer Apple announced it had signed up long time hold out CVS, with the pharmacy introducing Apple Pay across its ~8,400 stand-alone location last year.

Also signing up then: 7-Eleven, which Apple says now launched support for Apple Pay in 95 per cent of its U.S. convenience stores in 2018.

In December, Apple Pay also finally launched in Germany — where Apple slated it would be accepted at a range of “supermarkets, boutiques, restaurants and hotels and many other places” at launch, albeit ‘cash only’ remains a common demand from the country’s small businesses.