An Egg, Just a Regular Egg, Is Instagram’s Most-Liked Post Ever 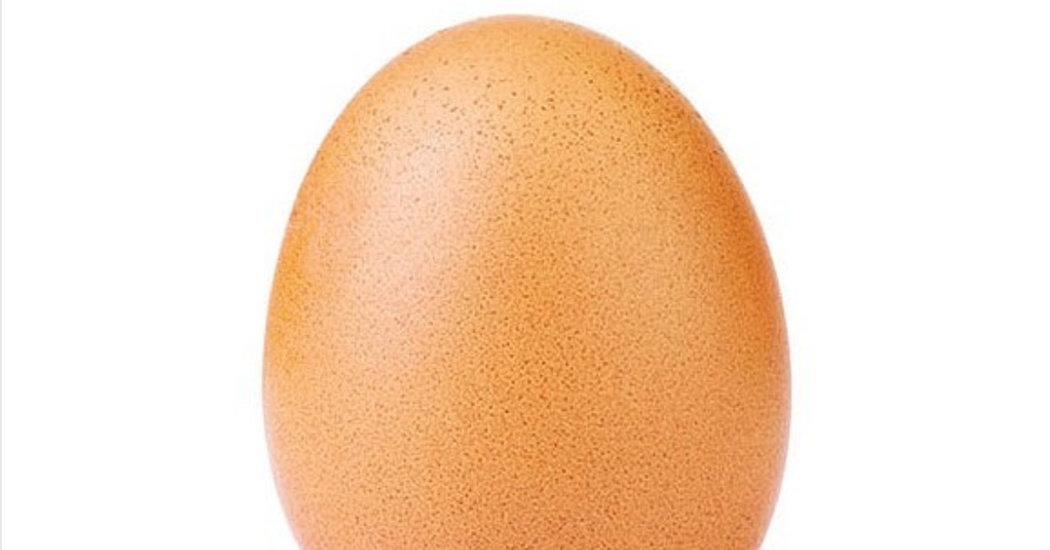 Please don’t expect any of the following to make sense.

But on Sunday night, a photo of an egg, orange and lightly freckled, beat out Kylie Jenner’s birth announcement as the most-liked Instagram post ever.

Is the egg encrusted in diamonds? Does the egg have a popular YouTube channel you’ve never heard of? Is a sexy celebrity holding the egg?

Nope. None of the above. Just an egg.

That’s it. That’s the egg more than 24 million accounts have liked as of Monday morning, when it was still gaining likes at a rapid pace.

We do not yet know who posted the egg on Jan. 4, why it was posted, or why this attempt to set a record actually worked.

Nor do we offer grand perspective on why this happened. Sometimes, the will of the internet just bends in peculiar ways, and in this case, the internet decided it was into that egg.

Still, you would scoff at the cultural significance of the egg at your own peril. For perspective: Last year’s top television show in the United States, “Roseanne,” averaged 20 million viewers per week. If everyone who liked the photo created a new city, it would be the world’s second-largest, beating Shanghai. At its current pace, the egg’s fans could soon pass the population of Australia.

At that scale, internet frivolity starts to look a little less frivolous.

It’s not the first time that internet users, showing a thirst for chaos, have displaced meaningful record holders in favor of a lighthearted gag. In 2017, the internet coalesced behind Carter Wilkerson, a 16-year-old high school student who set a Twitter record for retweets after asking Wendy’s for free chicken nuggets. (He was recently dethroned by a Japanese businessman, under the handle @yousuck2020, who got more than five million retweets when he offered about $9,250 to 100 random people who retweeted him.)

In response, Ms. Jenner posted a video of herself cracking a similar-looking egg on the pavement.

“Take that little egg,” she wrote.

On Monday evening, the world-record egg-posting account, hinting at a mysterious Phase 2 of the egg plan, wrote on Instagram that “it doesn’t end here,” and that “we’re only just getting started.”

“This is a madness,” the person behind the account wrote. “What a time to be alive.”