Amid a Cyclone’s Fierce Destruction, Mozambique Finds Shards of Hope

MASSANE, Mozambique — When the water reached their feet, the family scrambled up a mango tree. Augusto Brás, a sinewy farmer, hauled two of their children to the higher branches while his wife, Amélia Augusto, balanced on a lower bough. They clung on for three days, as the cyclone howled around them.

When the water level crept up the tree trunk, stopping at about six feet, they prayed. A rescue helicopter swooped overhead on the third day and flung out a box of biscuits. Mr. Brás swam through the water to catch it. Ms. Augusto wept: their 8-year-old son, Francisco, had been swept away in the torrent as they ran from their home.

There was little time to mourn as the family, back home three weeks later, fought to stave off hunger. Around the mound of broken bricks that was once their house stretched a vista of devastation: fields upon fields of felled crops, maize and rice, their principal source of food for the coming year, now gone.

“We have to collect what’s rotten,” said Mr. Brás, holding out a handful of sodden maize plants that he had scavenged from a nearby field. “This is all we’ve got, for now.”

The tropical cyclone known as Idai, which barreled through southern Africa last month, ravaged one of the poorest corners of the planet. In Mozambique, which bore its brunt, it leveled 110,00 homes, inundated entire towns and left a vast swath of rich farmland waterlogged or smeared in mud. The official toll is 603 dead, but officials suspect many more victims were washed-out to sea.

The cyclone wiped out the main source of food in a country where nearly half the population already lived below the poverty line. Almost 3,000 square miles of farmland were destroyed, weeks before the annual harvest. People like Amélia Augusto and Augusto Brás need sustained help for another year just to survive.

In the weeks since the cyclone, a vast international aid campaign has swung into action. That effort — hospitals-in-boxes transported by boat, food dropped from planes, and 800,000 people immunized against cholera — helped to avert the worst. The rescuers had some lucky breaks. The World Food Program snapped up 30,000 tons of rice stuck at port in the flood zone, providing an instant source of food.

But the outpouring of support has only nipped at the short-term needs. Cyclone Idai cost Mozambique as much as $773 million in direct economic losses, as estimated by the World Bank. The fund-raising appeal coordinated by the United Nations to cover the initial emergency was for only $282 million — a far cry from the nearly one billion dollars pledged within days to rebuild Notre-Dame Cathedral in Paris after last week’s disastrous fire. As of Saturday, $74 million had been raised toward the U.N.’s goal for Mozambique.

Idai’s first victim was the city of Beira, one of the most important ports in southern Africa. Winds up to 105 miles an hour crushed giant dockside storage silos like tin cans, and whipped tin roofs from the shanties in a nearby slum. At least 61 people were killed in the city.

At a farm outside Beira, workers rushed to shore up crumbling fences and prevent 26,000 crocodiles being raised there from breaking free.

It’s more than a century since the southwest Indian Ocean basin has seen a tropical cyclone as deadly as Idai, which made landfall in Mozambique on March 4 before a nine-day whirl of destruction that also hit parts of Zimbabwe and Malawi, where another 400 died.

Scientists are reluctant to blame climate change for any individual extreme weather event. But in some parts of the world, like Bangladesh and Mozambique, there is evidence that rising temperatures are making cyclones stronger and more frequent. Often, those same countries contribute a tiny fraction of the emissions that cause global warming.

In Buzi, a riverside town 16 miles inland from Beira, residents had huddled onto rooftops as water flooded in. Crowds lived for days atop the police station and the mosque. Some residents said they saw crocodiles swim past. In the Roman Catholic church, a couple hundred people huddled on the altar, and when that was flooded they perched on chairs.

I reached Buzi last week, the day after its main road reopened. Down by the river, bare-chested men heaved sacks of relief aid onto a small dock. The water had receded from the town, leaving a trail of destruction. A small boat lay stranded in the center of a street. Electricity poles tottered. A giant baobab tree, with a trunk as wide as a car, lay uprooted on a street.

A man holding a megaphone wobbled along on a motorbike, alternatively playing a football song — “Ole! Ole!” — then urging residents to “go get vaccinated!” against cholera.

Some people rallied to rebuild. Joaquin Cuahanha, drove an ax into the trunk of a fallen coconut tree, carving out new planks to rebuild his home. He worried about feeding his four children. He smiled. “For now, we just need to get back to work.” 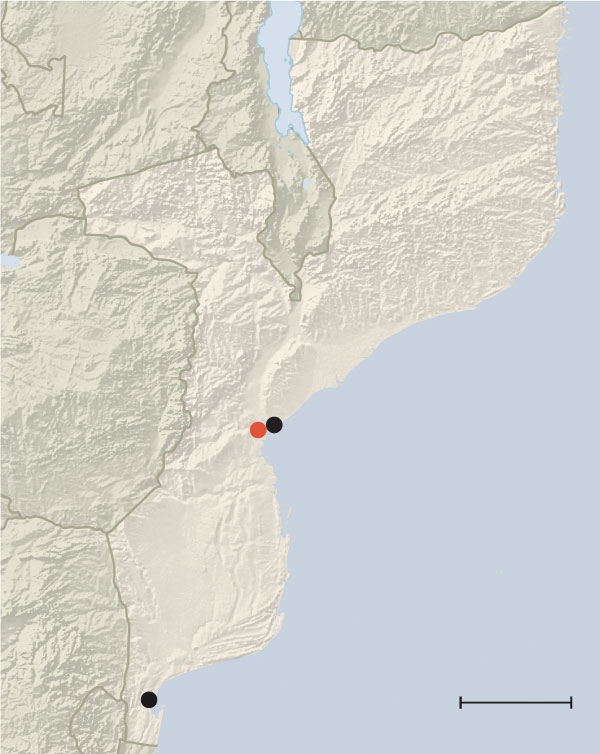 Others looked shellshocked, like the employees of the Papoila stationery store, salvaging what they could from its roofless remains.

The next day Amélia Augusto reached Buzi. She had left behind her family, and the mango tree, and walked two hours along mucky paths and through waterlogged fields, hitching a ride in a rickety wooden canoe where the water got too deep. She was bringing a neighbor, Ester Carama, to seek help.

Ms. Carama’s 2-year old daughter, Laucina, bundled against her chest, had fallen ill with diarrhea and vomiting — worrisome symptoms because they possibly indicated cholera, which had exploded in the cyclone zone. In a matter of days, Mozambique went from a handful of cholera infections to more than 3,000. The first deaths from the outbreak had just been announced.

The women were directed to the gate of a makeshift clinic run by Doctors Without Borders, in the ruins of the destroyed public hospital. A worker sprayed the soles of their feet with disinfectant.

If untreated, cholera can kill within hours. An ancient scourge, it made headlines in Yemen last year when more than one million cases were reported.

In Mozambique, a six-day cholera vaccination campaign kept the number of cholera deaths down. Eight deaths from cholera have been reported since the cyclone, according to the World Health Organization.

Hours later, a doctor from Catalonia emerged from the Doctors Without Borders clinic. Laucina did not appear to have cholera, he explained — she just needed a good meal.

Inside a tent, Ms. Carama and her daughter sat quietly munching a large bowl of rice and beans.

For now, aid is not lacking in Buzi. So many helicopters land on the town soccer pitch — up to 40 some days, aid workers say — that the mayor jokes she needs to set up an air traffic control tower.

Unlike the humanitarian crises in Syria or Yemen, bombs or bullets are not falling in Mozambique. So the operation has drawn a broad diversity of rescuers — Cuban doctors, Brazilian firefighters and American marines — as well as the usual aid behemoths from the United Nations and international agencies.

Muslim volunteers from South Africa, men with long robes and curly beards, handed out tin roofs outside the mosque.

Medics from the American relief group Samaritan’s Purse, whose president is the evangelist Franklin Graham, set up a field hospital.

“Thank you, thank you, Jesus!” the medics sang early one Sunday morning, in English, Portuguese and Arabic, before they started work.

The next morning Ms. Augusto and Ms. Carama went home. At the river, they passed bales of mosquito nets, stacked on the dock, that were marked with American flags and stickers that said, “U.S. President’s Malaria Initiative.” They carried heavy buckets filled with grain on their heads, walking with the poise of Olympic gymnasts.

A wooden door, propped against a tree, was all that remained of Ms. Augusto’s home. Her husband estimated it would cost $200 to rebuild it. He doesn’t have that kind of money.

Ms. Augusto paused to finish the story of her son. “He was taken by the water as we ran from our home,” she said, tears glistening on her cheek. “We tried to catch him, but he was gone.”

Fishermen found Francisco’s body after eight days, a few miles from the spot where he disappeared. It was trapped inside a cluster of fallen banana tree leaves, on the banks of a swollen river.

The family buried him for now in the backyard of an abandoned house. The local cemetery was too waterlogged.