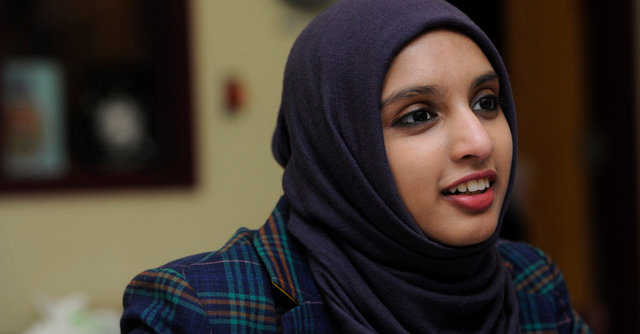 An American university student found herself caught up in a terror investigation on the other side of the world this week after Sri Lankan authorities mistakenly posted her picture with a list of potential suspects in the Easter Sunday attacks that killed more than 250 people.

The student, Amara Majeed, who attends Brown University in Rhode Island, posted on Facebook on Thursday that her photo was included in an alert issued by Sri Lanka’s Criminal Investigation Department. The public notice urged people to report any details about the potential suspects to authorities. It featured Ms. Majeed’s photo alongside the name Fathima Qadiya, who officials say is wanted in connection with the attacks.

“I have this morning been FALSELY identified by the Sri Lankan government as one of the ISIS Easter attackers in Sri Lanka,” Ms. Majeed wrote in the Facebook post. “What a thing to wake up to! This is obviously completely false and frankly, considering that Muslim communities are already greatly afflicted with issues of surveillance, I don’t need more false accusations and scrutiny.”

Ms. Majeed, a prominent United States-based Muslim activist, is the daughter of Sri Lankan immigrants. Her activism has been lauded by media organizations around the world. Ms. Majeed has been an outspoken advocate for the American Muslim community, and in 2014 wrote a book titled “The Foreigners,” to quash stereotypes about Islam.

While still in high school, she launched the Hijab Project, which encouraged women to wear a hijab for a day and write about their experiences to combat discrimination. In 2016, she wrote an open letter to Donald Trump Jr. after he compared refugees to Skittles.

Ms. Majeed was alerted to the presence of her photo in the police communication by relatives living in Sri Lanka. Officials later retracted her image from the suspect list, saying it was a mistake, but offered no apology or explanation for the situation. The Criminal Investigation Department said it was still looking for Ms. Qadiya but that the photo was not of her.

At a news conference on Friday at an office of the Council on American-Islamic Relations, Ms. Majeed said she had woken up a day earlier in her dorm room “to 35 missed calls, all frantically informing me that I had been falsely identified as one of the terrorists.”

The mistake, she said, “had compromised my family’s peace of mind and endangered our extended family’s lives.” And while she added that her family appreciated the authorities’ correction, “we are concerned that the correction will not receive nearly as much traction as the error.”

Since posting about the incident on Facebook, Ms. Majeed has drawn both support and vitriol from Sri Lankans. Her post has been viewed thousands of times and has drawn hundreds of comments. Some have hurled anti-Muslim slurs at her, claiming that she is aligned with Islamic State extremists, despite the police admission that her photo was incorrectly associated with the suspect list.

The Muslim community has faced a backlash in Sri Lanka after the Islamic State claimed responsibility for the attacks. Reports of mob attacks and violence against Muslims — a minority group in the country — have emerged in the wake of the Easter attacks.

Ms. Majeed’s Facebook post included a plea for Sri Lankan authorities to be more diligent before posting information about suspects.

“Please stop implicating and associating me with these horrific attacks,” she wrote. “And next time, be more diligent about releasing such information that has the potential to deeply violate someone’s family and community.”

The misidentification of Ms. Majeed as a potential suspect was just one of a series of errors made by authorities in recent days. First, they ignored warnings that an attack was coming. Then, on Thursday, the death toll was revised down by more than 100, after authorities said an earlier figure of more than 350 victims was inaccurate.