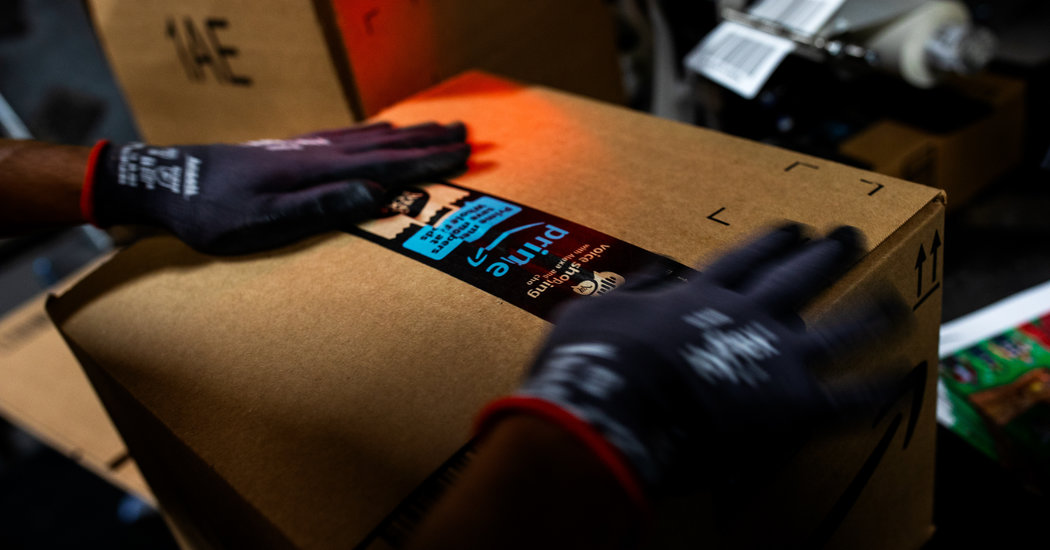 SEATTLE — Amazon held off stiffer competition for online shoppers during the holiday season, once again increasing its sales. But the company said on Thursday that growth slowed from its usual breakneck pace — and it came at a cost, with the company spending far more on shipping to win customers.

While strong, the latest quarterly results suggested that Amazon’s retail business not only faces more competition, it is also maturing. The company reported that its revenue from retail sales and services grew 17 percent to almost $65 billion globally, while its shipping costs rose 23 percent, to $9 billion, compared with the same quarter a year ago.

The company is compensating for slowing growth in e-commerce by expanding its fast-moving, highly profitable cloud and advertising businesses. Over all, the company produced a profit of $3 billion in the quarter, up more than 60 percent from the same period a year earlier.

Competition for shoppers over the holidays was intense and expensive, as other big retailers stepped up their promotions. Target offered free two-day shipping, no matter how small an order, and Walmart and others tried to maximize use of their physical stores, an advantage they have over Amazon. On Christmas Eve, Best Buy customers could order products online from store inventory as late as 5 p.m. and pick them up just an hour later.

Amazon pushed back with expanded free shipping to all customers until about a week before Christmas, and made more products eligible for free one-day shipping for Prime members.

But revenue from online shopping slowed, in part because now most of Amazon’s retail sales come from third-party merchants selling on its marketplace rather than from Amazon’s own inventory. Amazon gets only a slice of this revenue.

In addition, the growth of Prime membership, which costs $119 a year, is approaching a plateau. About 56 percent of American households will be Prime members this year, up only slightly from 53 percent in 2018, Morgan Stanley estimated. Prime members spend far more on the site, making them crucial to increasing sales.

Another risk awaits the company: India. The country, which Amazon has made its most important emerging market, imposed new regulations that prohibit foreign e-commerce companies from owning a stake in sellers that offer items on their sites. That has limited the selection available on Amazon by almost a third virtually overnight. Brian Olsavsky, Amazon’s finance chief, cited “uncertainty” in India as a reason Amazon predicted lower revenue for the next quarter than analysts had expected.

Even as sales growth has slowed, though, Amazon has increased profit margins.

The third-party merchant business, for example, is generally more profitable than when Amazon sells products it buys directly because the costs are lower.

It has also tried to squeeze costs from its operations. Mr. Olsavsky pointed to how the number of employees grew 38 percent in 2017, excluding acquisitions, but just 14 percent in 2018. There were similar trends in the construction of data centers and warehouses. “We had a banking, if you will, of some large expansions in the prior two years,” Mr. Olsavsky said on a call with analysts.

“The theme has been Amazon shifting from a product seller to a fee collector,” said Simeon Siegel, an analyst at Instinet. The shift from growth to profit is common as companies mature, he said: “We are going through growing pains.”

Shares in the company fell nearly 5 percent in after-hours trading, after the quarterly results were released.

Amazon’s two great profit engines are not in the core business of selling and fulfilling items, however — they are in cloud computing and advertising.

After several years of dominating the market, which it essentially helped create, Amazon now faces robust competition, including from Microsoft. At its annual cloud conference in November, Amazon announced a number of new products, including AWS Outposts, which lets companies use a single set of tools to manage data across cloud and local servers, an area known as “hybrid cloud” where Microsoft has had success.

Mr. Olsavsky said the company had been hiring aggressively to bring in more engineers and sales staff for the cloud offerings, saying “AWS maintained a very strong growth rate and continued to deliver for customers.”

Investors have increasingly looked to Amazon’s ad business, which displays ads on its own site as well as across the web based on consumer shopping habits, as a major driver of profit. The “Other” business unit, which analysts say is almost entirely advertising, had almost $3.4 billion in revenue during the quarter, and more than $10 billion over the last year.

“They have long been a sleeping giant and had capacity to build a big advertising business,” said Brian Wieser, an analyst with Pivotal Research Group.