Amazon is taking on QVC with the launch of Amazon Live, which features live-streamed video shows from Amazon talent as well as those from brands that broadcast their own live streams through a new app, Amazon Live Creator. On the live shows, hosts talk about and demonstrate products available for sale on Amazon, much like they do on QVC. Beneath that sits a carousel where shoppers can browse product details and make purchases.

More than one video streams on Amazon Live at the same time, so shoppers can tune to the one that most interests them.

For example, Amazon Live is currently streaming a Valentine’s Day Gift Shop show, a cooking-focused show (In the Kitchen with @EdenEats) and Back to Business Live, which is showing off products aimed at daycare centers and schools.

You can tap on the different videos to change streams, scroll down to watch recordings of those videos that were recently live or view which live shows are coming up next.

On the web, the live-streaming site is available at Amazon.com/Live, but it’s not listed yet in Amazon’s main navigation menus so it remains hard to find. On mobile, there’s now a section labeled “Amazon Live” that’s appearing on both the iOS and Android app’s main navigation menu as of a recent app update.

We’ve confirmed the page Amazon.com/Live is newly added, though this is not the first time Amazon has offered live streams. 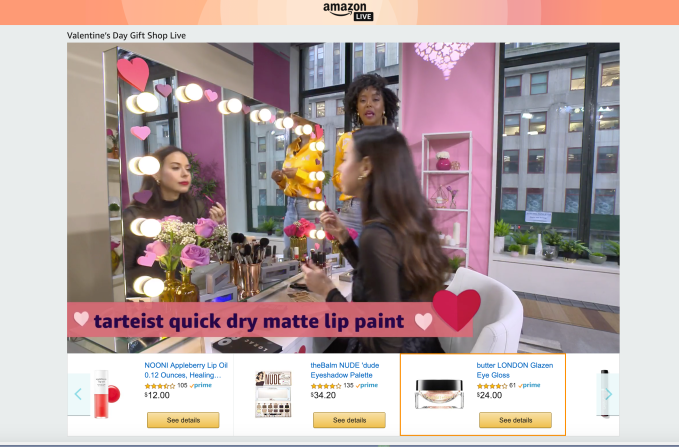 The retailer has dabbled in live streaming in the past, with mixed results.

Two years ago, it pulled the plug on its short-lived effort, Style Code Live, which also offered a QVC-like home shopping experience. The live show featured hosts with TV and broadcast backgrounds, and brought in experts to talk about beauty and style tips.

But Style Code Live focused only on fashion and beauty.

Amazon Live, on the other hand, covers all sorts of products, ranging from smart home to games to toys to kitchen items to home goods to electronics to kitchen items and much more. It’s also positioned differently. Instead of being a single live video show featuring only Amazon talent and guests, live streaming is something Amazon is opening up to brands that want to reach a wider audience and get their products discovered.

Excited to announce that I’m joining @Amazon’s digital show, AMAZON LIVE, as one of their newest hosts. ☺️ It’s QVC meets HSN, where all the hottest deals are discussed. My first episode airs tomorrow (Tuesday) & you can watch live from 11am-1pm EST: https://t.co/vVR3jCCw1v 💙 pic.twitter.com/oN6pz8VWef

Above: Amazon Live hosts – according to LinkedIn, they are not Amazon employees

You may have seen some of these live-streamed videos from brands in the past.

On Prime Day 2017 and again in 2018, Amazon aired live video streams promoting some of the Prime Day deals. These videos were produced by the brands, very much like some you’ll now find on Amazon Live.

The company has also aired live-streamed content on its Today’s Deals page, and has allowed brands to stream to their product pages, their Store and on Amazon.com/Live before today.

Amazon now aims to make it easier for brands to participate on Amazon Live, too.

On a website detailing Amazon Live, Amazon touts how live-streaming video can drive sales, allow a brand to interact with their customers in real time — including through chat during the live stream — and reach more shoppers. One early tester, card game maker “Watch Ya’ Mouth,” is quoted saying that live streaming had helped to increase daily visits to its product detail page by 5x and “significantly grew our sales.”

Available only on iOS, the app allows a brand to stream its video content directly to Amazon.com on desktop, mobile and within the Amazon mobile app. The app supports streaming directly from the smartphone itself or through an encoder using a professional camera.

It also includes built-in analytics so brands can determine how well their stream performed, including things like how much of their budget they’ve spent on “boosting” (a way to pay to reach more shoppers), total views, unmuted views and other metrics.

According to data from Sensor Tower, Amazon Live Creator was released yesterday, on February 7, 2019, and is currently unranked on the App Store. It has no reviews, but has a five-star rating.

Currently, the live-streaming feature is open to U.S. Professional Sellers registered in the Amazon Brand Registry, Amazon’s website says, and live streaming from China and Hong Kong is not supported. 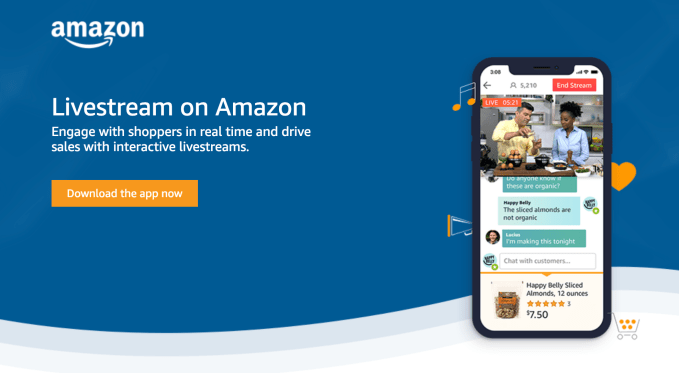 Amazon has been interested in live streaming for some time. The company patented its idea around live video shopping last year and was spotted hiring for its Amazon Live efforts before that.

However, Amazon had claimed at the time that its live-stream shopping experiences were “not new.”

That’s true, given that live streams that would sometimes appear around big sales, like Prime Day, for instance. But Amazon has promoted its live video directly to online shoppers since Style Code Live.

This week’s launch of the Amazon Live app for brands and Amazon’s move to create a dedicated link to the Amazon Live streams on its mobile app indicates that live video is becoming a much bigger effort for the retailer, despite its attempt to shoo this away as “old news.”

This increased focus on live video also comes at a time when Instagram is being rumored to be working on a standalone shopping app, and is heavily pushing its creator-focused IGTV product into users’ home feeds. QVC itself just announced its new identity, plans to venture deeper into e-commerce, and shoppable video app. And, of course, YouTube has capitalized on how both live and pre-recorded video demos from brands and influencers can help to sell products like makeup, electronics, toys and more.