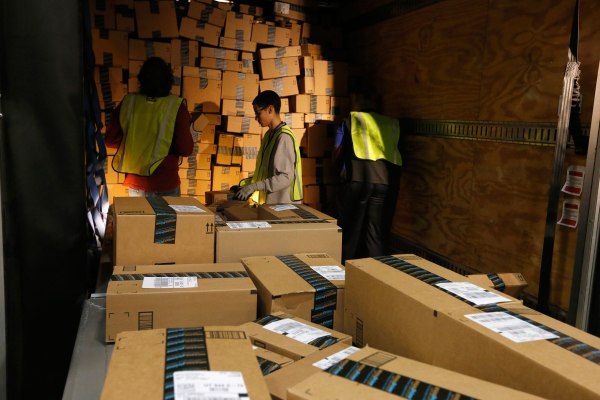 Yesterday Amazon managed to beat out Wall Street’s already optimistic expectations with another record quarterly revenue. In amongst its victory laps, the company announced intentions to shift its free two-day Prime shipping to one-day.

The move has been a holy grail for the company, which has already pushed parcel services and its own fulfillment centers to their seeming limits with the promise of a two-day turn around. While some one-day and even two-day options do exist on certain offerings (and in other locales like France, Germany, Netherlands), an across the board push to one day delivery in the States is a massive undertaking.

Amazon CFO Brian Olsavsky notably hedged his bets a bit with his language. Amazon isn’t committing to a timeframe, instead the exec stated that the e-commerce giant is “currently working on evolving” the program. That statement along was enough to ruffle Wall Street, hitting chief competition Target and Walmart right in the stock ticker, leaving them scrambling to respond (an on-going trend over the past decade or so).

Amazon has notably been building out its fulfillment centers. We recently took a trip to the company’s massive JFK8 warehouse in Staten Island, which still has that new factory smell, with plans to employ an eventual 2,250 people in New York City. That space, along with 25 or so others are home to around 100,000 robotic systems, aimed at streamlining the process. That number is expected to increase with recent moves like the company’s acquisition of Canvas.

But in spite, or perhaps because of the presence of robotics systems, there’s are are pertinent questions about how these sorts of moves will impact human employees. The company recently increased minimum wage for full-time employees following a public dressing down from politicians like Vermont Senator Bernie Sanders. Since then, however, the company has used the move to challenge the competition to make changes.

Even so, reports of difficult working environments have persisted.