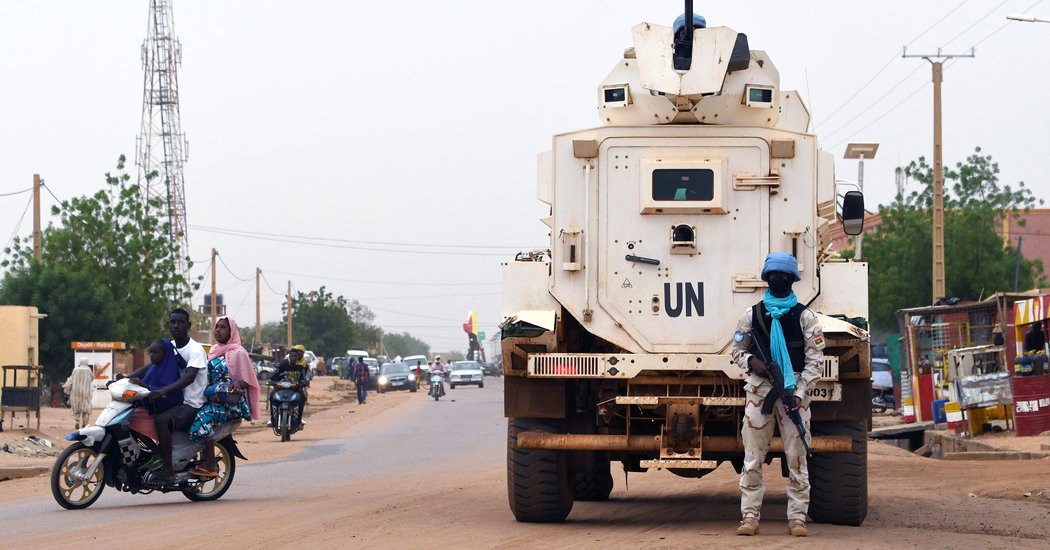 A branch of Al Qaeda in northwestern Africa claimed responsibility for an attack on a United Nations base in Mali that killed 10 Chadian peacekeepers on Sunday, saying it was in response to Chad’s resumption of diplomatic relations with Israel.

In a statement, the United Nations mission in Mali said that a peacekeeping base had come under attack in the northeastern village of Aguelhok. The village is in one of the most troubled regions of the country, which has repeatedly been in the cross hairs of a jihadist insurgency.

“Early this morning,” the statement said, “the blue helmets of the Minusma” — the peacekeeping mission in Mali — “fought off a complex attack launched by assailants who arrived aboard a convoy of numerous vehicles.”

Besides the 10 peacekeepers killed, 25 were wounded.

The Qaeda branch, the Group to Support Islam and Muslims, released its statement late Sunday. The group, which has gone through a series of name changes since pledging allegiance to Al Qaeda in 2006, framed the killings as a response to a decision by President Idriss Deby of Chad to normalize relations with Israel.

“This attack comes in response to the guidelines of the command of the organization of Al Qaeda, led by Sheikh Ayman al-Zawahri, may Allah preserve him, to thwart the normalization schemes woven by the Zionist Arabs and non-Arabs,” the group said in its statement. It was translated by the SITE Intelligence Group, which tracks extremist content.

The group’s claim of responsibility echoed a statement released last week by the Shabab, the Qaeda chapter in East Africa, after the shooting at a hotel in Nairobi that killed 21 people. The Nairobi attack, the Shabab claimed, was carried out under the orders of Al Qaeda and was in retaliation for President Trump’s decision to move the American Embassy in Israel to Jerusalem.

While much of the world’s attention has been on Al Qaeda’s rival, the Islamic State, analysts have long said that the Qaeda network remains a potent force.

That is especially the case in Africa. In Mali in 2012, half the country fell to the jihadists, who proceeded to run their own statelet, opening a Shariah tribunal and dispatching Islamic police officers to patrol the streets.

Aguelhok, where the peacekeepers were attacked on Sunday, was among the first villages to fall to the militants.

While other cities, including Timbuktu and Gao, were liberated and briefly enjoyed a return to normalcy, Aguelhok always remained in a state of insecurity. It was there that Al Qaeda sentenced to execution an unmarried nomadic couple, who were stoned to death in a show of force that deeply traumatized the local population.

Western embassies have long discouraged travel to the area because of the threat posed by the group.