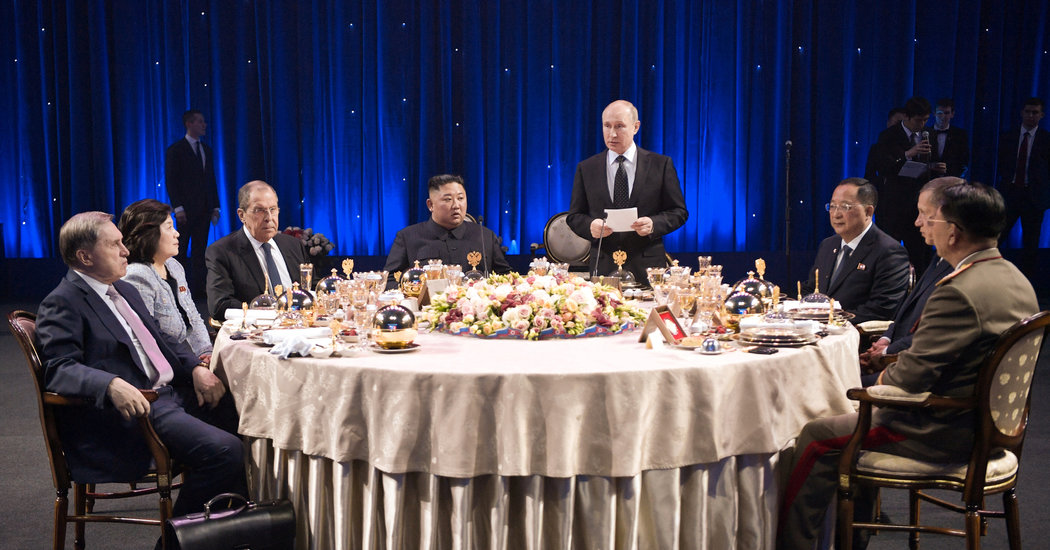 MOSCOW — President Vladimir V. Putin of Russia made a public show of support for North Korea on nuclear disarmament, seeming to undermine President Trump’s approach to nuclear diplomacy, as Mr. Putin and Kim Jong-un on Thursday wrapped up their first summit meeting.

Russian officials have long insisted they wanted to support Mr. Trump’s efforts at one-on-one nuclear negotiations with Mr. Kim, the North Korean leader. But speaking to reporters after the meeting in Vladivostok, on Russia’s Pacific Ocean coast, Mr. Putin said that North Korea needs security guarantees from more nations than just the United States before abandoning its nuclear arsenal.

Mr. Putin also reiterated Russian backing for a gradual process of trading disarmament for sanctions relief. “If we take one step forward and two backward, then we would fail to achieve the desired result,” Mr. Putin said. “But it will eventually be possible to achieve this goal, if we move forward gradually and if we respect each other’s interests.”

At talks in February in the Vietnamese capital, Hanoi, Mr. Trump had proposed a “big deal” to lift punishing economic sanctions in return for a quick and complete elimination of North Korea’s nuclear weapons program. Mr. Kim offered, instead, only a partial dismantling of nuclear facilities — while keeping his arsenal of nuclear warheads and missiles — in exchange for relief from the most harmful sanctions.

With each side calling the other’s plan unacceptable the talks collapsed — in sharp contrast to the rosy picture both leaders painted of their first meeting in Singapore in June.

After the breakdown in talks in Hanoi, North Korea vented its frustration with a weapons test and accusations that Mr. Trump’s national security adviser, John R. Bolton, and secretary of state, Mike Pompeo, were sabotaging negotiations.

In his first trip abroad since the talks in Vietnam, Mr. Kim sought to stress his friendly relations with the Kremlin as a counterweight to the hard-line tactics of the Trump administration.

“It is my and my government’s firm strategic position that the strategic and traditional friendly relations between North Korea and Russia be strengthened and improved ceaselessly to fit the needs of the new century,” Mr. Kim said after the meeting.

Mr. Kim added that the two leaders had a “very meaningful one-on-one exchange of opinions on issues of mutual interest and current issues.”

Mr. Putin suggested Russia might welcome a revival of multilateral talks on North Korea, known as the six-party negotiations, which have been dormant for a decade and were previously derided by Mr. Trump.

The Russian leader added that the United States and Russia have a common interest in preventing nuclear proliferation, in North Korea and elsewhere. But he also hinted at a longtime Russian argument that past American military action against governments at odds with the United States, like those of Iraq and Libya, made it hard today to persuade North Korea to disarm.

“The most important thing, as we have discussed today during the talks, is to restore the rule of international law and revert to the position where global developments were regulated by international law instead of the rule of the fist,” Mr. Putin said. “If this happens, this would be the first and critical step toward resolving challenging situations such as the one on the Korean Peninsula.”

Mr. Putin said Mr. Kim had asked him to share the details of the talks with the United States and China, saying there were “no secrets” at the negotiations.

Before they collapsed in 2009, the six-party talks among China, Japan, North Korea, South Korea, the United States and Russia had produced agreements to halt North Korea’s nuclear program, but the North later abrogated them.

Any Russian attempt to revive them now is bad news for Mr. Trump, who has repeatedly cited them as the prime example of the failed tactics of previous administrations. He has claimed that his own leader-to-leader diplomacy with Mr. Kim stood a far better chance of bringing about the North’s denuclearization.

Russian foreign policy has a different starting point. “In Moscow’s thinking, Kim Jong-un has learned from the fates of Iraq’s Saddam Hussein and Libya’s Col. Muammar el-Qaddafi that for an authoritarian regime, the only safeguard against U.S. military intervention is the possession of nuclear weapons capable of hitting the American mainland,” Aleksandr Gabuev, a fellow at the Moscow Carnegie Center, wrote.

Believing for this reason that North Korea is unlikely ever to wholly disarm, Russians have instead leaned toward supporting gradual disarmament as the only achievable goal, he wrote, suggesting Russia is not so much a “spoiler” in the talks as following its own analysis.

On the other hand, Mr. Gabuev wrote, Russia’s position is not very important because, “the tools Russia has at its disposal are too limited to have an impact.”

Mr. Putin mentioned the promise of long-stalled Russian proposals to foster peace along by building trans-Korean railroads, natural gas pipelines and electricity transmission wires, but said the United States has dissuaded South Korea from signing on. South Korea, Mr. Putin said, has a “deficit of sovereignty.”