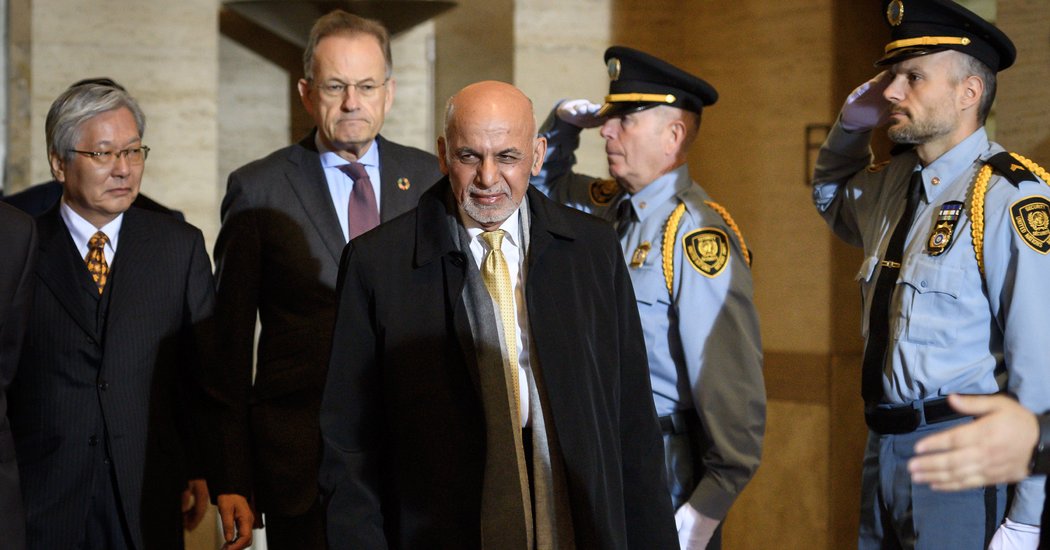 Afghanistan’s presidential race is in full swing, with several former officials lining up to challenge President Ashraf Ghani in a vote to be held in July, amid a raging war and fears that yet another fraud-marred election could further destabilize the country.

On Friday, Mohammad Hanif Atmar, a powerful former national security adviser who parted ways with the government in August, became the most serious challenger to formally join the race so far. He vowed to “save the country” from what he has described as Mr. Ghani’s mismanagement.

He joins a list of former officials who have either formally joined the race or declared that they will do so. They include Rahmatullah Nabil, a onetime intelligence chief who has selected an army general and a female former cabinet minister as his running mates (Afghanistan has two vice presidents); Zalmai Rassoul, a 75-year-old former foreign minister, who came a distant third in the disputed 2014 race that brought Mr. Ghani to power; and Shaida Abdali, a former diplomat seen as close to former President Hamid Karzai.

Mr. Ghani, who has declared that he will seek a second term, is scheduled to begin his re-election bid on Sunday. A senior official close to him said Mr. Ghani had dismissed his controversial first vice president, Gen. Abdul Rashid Dostum, from the ticket, with Amrullah Saleh, a former intelligence chief that he recently tapped to lead the country’s police force, replacing him.

General Dostum is accused of abducting, torturing and sexually assaulting a rival in 2016, the latest in a long history of human rights violations he is alleged to have carried out. The general is likely to support Mr. Ghani behind the scenes while putting forward a confidant, Suraya Dalil, to represent his party in a senior role in the government, the official said.

The emergence of powerful candidates reduces the uncertainty over whether the presidential elections, which were delayed after originally having been scheduled for the spring, would happen at all.

A concerted push by American diplomats to begin negotiations with the Taliban had raised the possibility that the election might be delayed further, or even replaced with an effort to reach a peace settlement that could pave the way for the Taliban’s participation in the government.

There was strong pushback against such rumors from the government and Afghanistan’s political parties. And the American-led efforts to persuade the Taliban to sit down with the Afghan government for talks seem to have hit major roadblocks, despite repeated meetings between American diplomats and the insurgents in recent months.

The Taliban say they will not meet with Afghan negotiators until they have an agreement with the United States over the future of American troops in the country and the release of insurgent prisoners, among other issues.

The July election faces several challenges, chief among them security, with the Taliban threatening large parts of the country. There are also fears that fraud will undermine the voting, as it has so often.

A parliamentary election in October was tainted by widespread accusations of rigging and mismanagement. Nearly three months later, the results are still not final.

Mohammad Yousef Rashid, who leads the independent Free and Fair Election Forum of Afghanistan, said that the Afghan election commission had struggled to regain the people’s trust after repeated chaotic elections, and that serious reforms were needed before July to avoid a crisis.

“These current commissioners are not able to lead the elections and we are aware of their weakness,” Mr. Rashid said. “Secondly, it is about corruption and fraud. Unfortunately, the parliamentary election was full of fraud. If we don’t solve these issues, once again the presidential election will be like a business.”

The tickets shaping up for the July race reflect how quickly alliances shift in Afghan politics.

Mr. Atmar got his start as a young intelligence officer in the final days of the Soviet-backed government in the late 1980s, before making his name after the American invasion in 2001 as a respected manager who led several ministries. As his running mates, Mr. Atmar chose two former mujahedeen fighters who joined the guerrilla war against the Soviet-supported government he served, and who also became allies of the Americans after 2001.

Both Mr. Atmar and one of his running mates, Mohammed Yonus Qanooni, lost a leg in the last stages of the war against the Soviet Union or soon afterward, when they were on opposing sides.

Mr. Ghani’s ticket also includes former rivals. Until he was appointed as the interior minister last month, Mr. Saleh, now one of Mr. Ghani’s running mates, was a staunch critic of the president.