A Top Huawei Executive Is Arrested in Canada for Extradition to the U.S. 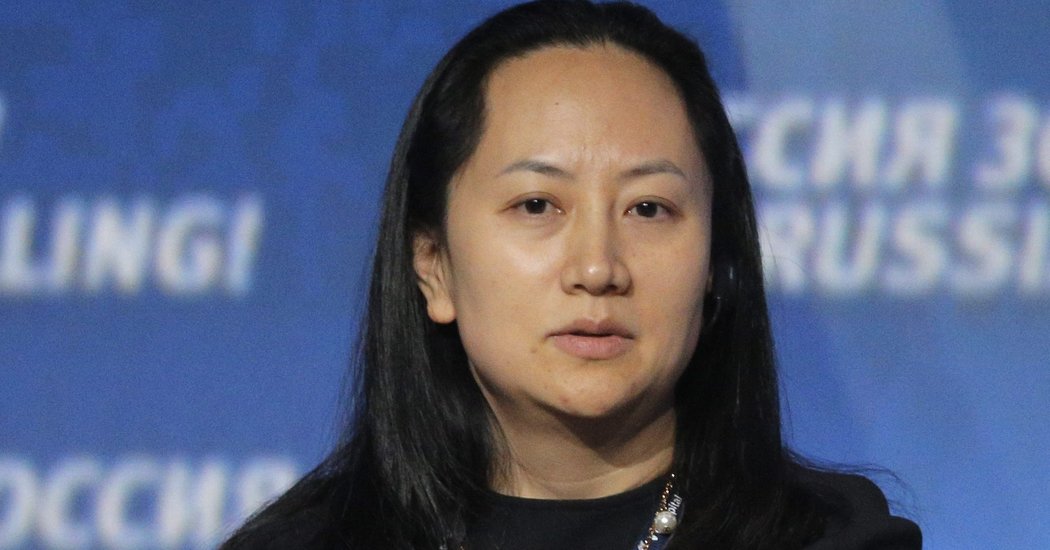 SAN FRANCISCO — A top executive and daughter of the founder of the Chinese tech giant Huawei was arrested on Saturday in Canada at the request of the United States, in a move likely to escalate tensions between the two countries at a delicate moment.

The arrest of Meng Wanzhou, the chief financial officer, unfolded on the same night that President Trump and President Xi Jinping of China dined together in Buenos Aires and agreed to a 90-day trade truce. The two countries are set to begin tense negotiations in hopes of ending a trade war that has been pummeling both economies.

Those talks now face an even steeper challenge. The aim will be for the United States to ease its tariffs; in exchange, China will be expected to lower trade barriers and further open its markets to American businesses.

What’s more, Ms. Meng’s detention raises questions about the Trump administration’s overall China strategy. Beijing is now likely to pressure Canada to release her and to press the United States to avoid a trial.

“The arrest of a family member linked to Huawei’s founder indicates how the tension between the two sides is rapidly escalating,” said T.J. Pempel, a professor of political science at the University of California, Berkeley, who specializes in East Asian politics and economy.

Ms. Meng, who joined Huawei in 1993 and is also a deputy chairwoman, was taken into custody in Vancouver on Dec. 1, said Ian McLeod, a spokesman for Canada’s Justice Department. He said she was “sought for extradition by the United States” but did not give a reason for what prompted the arrest. He added that a publication ban requested by Ms. Meng prevented him from providing any further details. A bail hearing has been set for Friday.

Senator Ben Sasse, a Republican of Nebraska, linked the arrest to the American sanctions against Iran.

Mr. Sasse said China had been “working to creatively undermine our national security interests, and the United States and our allies can’t sit on the sidelines.” He added that “Americans are grateful that our Canadian partners have arrested the chief financial officer of a giant Chinese telecom company for breaking U.S. sanctions against Iran.”

Huawei, China’s largest telecom equipment maker, has been under investigation into whether it had broken American trade controls to countries including Cuba, Iran, Sudan and Syria.

This year, the Treasury and Commerce Department also asked the Justice Department to investigate Huawei for possibly violating economic sanctions against Iran, according to an official who spoke on the condition of anonymity because he was not authorized to discuss the investigation. Prosecutors in the Eastern District of New York took on the case, he said.

In response, a spokesman for the Chinese embassy in Canada said in a statement that “the Chinese side firmly opposes and strongly protests over such kind of actions” and urged the authorities “to immediately correct the wrongdoing and restore the personal freedom of Ms. Meng.”

Huawei said in a statement that Ms. Meng was arrested while changing planes in Canada and that she faced unspecified charges from the Eastern District of New York.

“The company has been provided very little information regarding the charges and is not aware of any wrongdoing by Ms. Meng,” Huawei said, adding that it complies with all laws where it operates.

Press representatives for the Justice Department and the United States Attorney’s Office in the Eastern District of New York declined to comment. The White House did not immediately respond when asked if Mr. Trump was aware of the detention during his dinner with President Xi.

Julian Ku, a professor at Hofstra University Law School, wrote on Twitter that the move was justifiable. “US law prohibits exports of certain US-origin technologies to certain countries,” he said. “When Huawei pays to license certain US tech, it promises not to export to certain countries like Iran. So it is not unreasonable for the US to punish Huawei for flouting this US law.”

The arrest meets several major foreign policy aims of the Trump administration. American officials have sought to persuade other nations to curb business ventures with Huawei because of security concerns. The White House has also focused on tightening and enforcing economic sanctions on Iran, months after Mr. Trump announced he was withdrawing from a multinational agreement reached under President Barack Obama’s administration to freeze Iran’s nuclear arms program.

Last month, the United States imposed sanctions aimed at reducing exports of Iranian oil to zero and crippling Iran’s economy, though China is one of a handful of countries allowed to continue to buy oil for six months.

The United States and China have also been locked in a struggle for high-tech supremacy, in a race that has increasingly taken on political undertones this year. While the United States has long claimed an advantage in the tech industry, China’s internet companies, semiconductor makers and telecom equipment makers have all been growing rapidly, with many benefiting from government investment.

President Trump has tied national security to advancement in technologies like wireless networks, and has made protection of the domestic tech industry a part of his agenda. In March, he blocked a $117 billion bid by Broadcom, a Singapore-based chip maker, for the American chip maker Qualcomm, citing national security concerns and how it might allow China — specifically citing Huawei — to leap ahead in next-generation 5G wireless networks.

A month later, the Commerce Department banned ZTE, China’s second-largest maker of telecommunications equipment, from using components made in the United States. Federal authorities said ZTE had violated American sanctions against Iran and North Korea, in a move that caused the Chinese company to cease “major operating activities” for a time. Mr. Trump ultimately intervened and ZTE agreed to pay a $1 billion fine, replace its board and senior leadership and allow the United States to inspect its operations with a handpicked compliance team.

Over the last decade, Huawei has grown into a powerhouse. Founded in 1987 by Ren Zhengfei, a former People’s Liberation Army engineer, it generated over $90 billion in revenue in 2017. Its equipment is the backbone of mobile networks around the world, and its smartphones are popular in Europe and China. That has made it a symbol of China’s technological prowess and evolution from a country that makes cheap but unreliable gadgets to cutting-edge products that can rival the best of Silicon Valley and other Asian technology giants.

Yet Huawei has long faced scrutiny as a security threat in the United States. Washington has expressed concern about using Huawei products, citing spying risk because of the company’s close ties to the Chinese government.

While Huawei has long tried to make inroads into the United States, it has been bedeviled by the security concerns. In January, Huawei’s effort to sell a new line of smartphones in the United States was derailed when AT&T walked away from a deal to distribute the devices.

Eswar Prasad, a trade policy professor at Cornell University, said the Huawei issue could be a cloud over coming talks. “A fragile trade truce between China and the U.S. that was already foundering is now at greater risk of unraveling in relatively short order,” Professor Prasad said.

He added: “It is likely that China will have a measured response to this incident, although it will certainly add a sharper edge to the negotiations between the two sides.”