A ‘Sir’ With Blue-Collar Roots: Britain’s Labour Race Has an Unlikely Leader 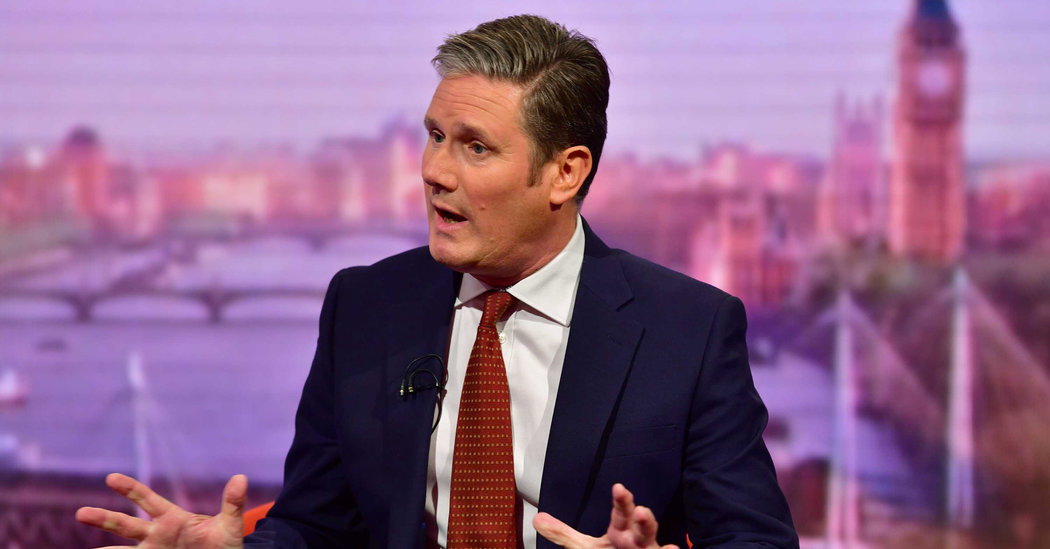 LONDON — After Britain’s Labour Party suffered its worst defeat since 1935 in last month’s election, a chorus of critics faulted the party for losing touch with its working-class roots in the industrial North and becoming too closely identified with the left-wing, London-centered politics of its leader, Jeremy Corbyn.

Yet as the race to succeed Mr. Corbyn begins, and Labour seeks a path out of the wilderness, the early betting is on another Londoner, Keir Starmer, who not only has a knighthood from Queen Elizabeth II for his “services to law and criminal justice” but also holds an advanced law degree from Oxford.

Mr. Starmer, who is expected to declare his candidacy in the coming weeks, is the clear favorite in a recent poll of party members conducted by the research group YouGov. He leads the field of declared and likely candidates among men and women, with voters of every age group and social class, and in all regions of the country, according to the survey of 1,059 members taken in late December.

Though it is early in the race — Mr. Corbyn will stay on until March — the findings cast doubt on the conventional wisdom that Labour’s rank and file will turn to a leader from the Midlands or the North, where Prime Minister Boris Johnson’s Conservative Party made such damaging inroads among once-loyal Labour voters.

Instead, in backing Mr. Starmer, 57, the party’s members appear to be putting a premium on management experience and electability, after a landslide victory for Mr. Johnson that many blamed on Mr. Corbyn’s unpopularity and perceived unfitness for office.

A human-rights lawyer who served as head of the Crown Prosecution Service, Mr. Starmer has been the shadow minister for Brexit under Mr. Corbyn. In that job, he challenged Mr. Johnson’s threats to pursue a “no-deal Brexit” if Parliament did not approve his withdrawal agreement with the European Union.

But Mr. Starmer, who voted to remain in the European Union in 2016, also pushed his own party, which had been bitterly split over Brexit, to be open to a second referendum — something he now acknowledges will never happen in the wake of Mr. Johnson’s winning campaign to “get Brexit done.”

The Labour Party kept Mr. Starmer under wraps during the campaign, in part because of his heavy identification with the Brexit debate, which the party’s leaders did not want to highlight in the election.

In the poll, Mr. Starmer was favored by 36 percent of those who responded. The next most popular candidate, with 23 percent, was Rebecca Long-Bailey, a Manchester-born member of Parliament who is viewed as representing continuity with Mr. Corbyn’s leftist leadership.

“There’s been a lot of talk about Labour needing a leader from the North or a candidate who is identifiably working class, but that doesn’t seem to be the case,” said Tim Bale, a professor of politics at Queen Mary University, who directed the poll for YouGov, along with the University of Sussex.

“All the things that might disadvantage a white, middle-class, middle-aged man from London don’t seem to be hurting Keir Starmer,” Mr. Bale added. “He seems to be beating the Corbyn continuity candidate quite easily.”

While Mr. Starmer has a “sir” in his name and is a well-compensated lawyer who lives in North London, like Mr. Corbyn, his roots are working class: He is the son of a toolmaker and a nurse. Mr. Starmer prefers not to use the honorific, and in a stroke of fortune for an aspiring leader, he was named after the first leader of the Labour Party, Keir Hardie.

Mr. Starmer has taken pains not to disavow Mr. Corbyn’s left-wing agenda, which is still popular with the party’s grass roots. “It’s important not to oversteer,” he said in a post-mortem interview with The Guardian. “The case for a bold and radical Labour government is as strong now as it was last Thursday.”

But Mr. Starmer criticized the party’s failure to confront allegations of deep-rooted anti-Semitism in the party, which dogged Mr. Corbyn during the campaign, particularly when he declined to apologize for it.

Though tarnished by the defeat, Mr. Corbyn still commands a potent faction within the party; he could shape the outcome by endorsing a candidate. The party’s selection process is also lengthy and byzantine, which could open the door to a lesser-known candidate. Most of the candidates are women, which could hurt Mr. Starmer if the race comes to be defined by whether Labour should have a female leader.

Still, political analysts say the poll’s results align with their own private soundings of the party faithful.