A No-Deal Brexit? Leaders Are Alarmed; Voters, Not So Much 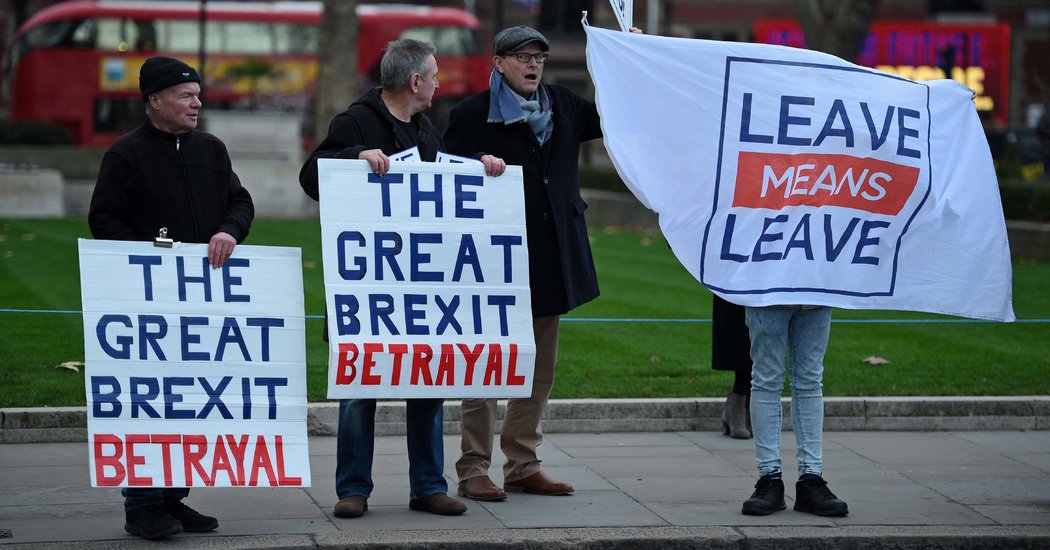 SUNBURY-ON-THAMES, England — Britain has been buffeted with high-level warnings in recent days of the grave risks of leaving the European Union without an agreement: A million lost jobs. An 8 percent drop in gross domestic product. Idle factories. Insulin shortages. Capital flight. A plummet in the pound.

But at the Hare and Hounds pub in Sunbury-on-Thames, England, in a neighborhood that voted strongly to leave the European Union, queries about a no-deal exit were met with shrugs and snorts of derision. It was not that the men and women drinking there hadn’t heard the warnings about a no-deal exit — it was that they did not believe them.

“We’ve been lied to so many times, haven’t we?” said Steve Ridley, 60, as snooker balls cracked in the background and a bartender called out crossword hints.

Mr. Ridley, who imports motorcycle parts, predicted that a no-deal Brexit would mean “slightly more paperwork until we get it sorted,” but certainly nothing serious, and there was no one in the Hare and Hounds who disagreed. Darren Smith, on a stool behind Mr. Ridley, called the warnings “scaremongering.”

“If the government had come up with these facts and figures before, maybe I would believe them now,” said Mr. Smith, 47. “They gave us the vote to get out of Europe, and now they delay and delay. It’s just a farce. It’s all a farce. I don’t trust any of them.”

This is where Britain is, on the cusp of one of the largest policy choices in its history: Battered by three years of political opportunism and partisan debate, many voters have less and less trust in the country’s institutions.

Few subjects highlight this as starkly as the prospect of a no-deal exit, which so alarms British legislators that 303 of them last week backed an amendment to halt contingency planning for no-deal, which they hope will make it more difficult to leave without an agreement. As the prospect of a no-deal exit draws nearer, some of the strongest pro-Brexit voices — like the environment secretary Michael Gove, and The Daily Mail tabloid — have abandoned longstanding Euroskeptic positions and joined in the warnings.

On Monday, Prime Minister Theresa May dialed up the caution, telling lawmakers that a no-deal exit, by granting Northern Ireland a distinct legal status, could lead to the breakup of the United Kingdom.

But much of the general public, polls suggest, has tuned out the warnings.

In polls taken last week by YouGov/Best for Britain, 31 percent of respondents said they would prefer to leave the European Union without a deal if Mrs. May’s withdrawal agreement is voted down on Tuesday — compared to 36 percent who would choose a second referendum and 16 percent who didn’t know what to do. The proportion preferring no deal rises to 57 percent among the 124,000 members of the Conservative Party, who play a key role in selecting party leaders.

Rob Ford, a professor of political science at the University of Manchester, said the government warnings have fallen flat in part because early on, Mrs. May repeatedly declared, “no deal for Britain is better than a bad deal for Britain.” The government, Mr. Ford added, “isn’t regarded as a credible source.”

On highly technical issues like the effects of Brexit on trade policy, voters tend to adopt the views of sources they trust, Mr. Ford said, like those politicians, news outlets and affinity groups that mirror their worldview. Mr. Ford’s analysis of British views on a no-deal exit came to two conclusions: Experts took the risks more seriously than the general public, and opinion was polarized along party lines, suggesting it was rooted in “tribal allegiances.”

Britons may find it more difficult to envision collapse, Mr. Ford said, having escaped Nazi occupation in World War II and the kind of drastic change that swept through post-Communist Eastern Europe, he added.

“The idea that everything could fall to bits, and basic things could just stop, it’s not really imaginable to us,” he said. “There’s an idea that we’ll all be all right in the end. Well, we may not.”

But anxiety was low at the Hare and Hounds, a haunt for off-duty workers from Heathrow Airport, about 15 miles southwest of London. The town, home to many mechanics, technicians and airport workers, had voted to leave the European Union by a percentage of 60 to 40. At a bar in London frequented by finance workers, the answers likely would have been quite different.

Mr. Ridley compared the anticipation mounting before the Brexit deadline to the run-up to forestall the Millennium Bug, also known as Y2K, in which companies worldwide scrambled to avert technical breakdowns when digital systems switched from 1999 to 2000.

Mr. Smith, a truck mechanic, said he had rarely voted in his life — “I’m working class, I don’t think you can trust any politicians” — but, on the day he voted to leave the bloc, he said he experienced a rare moment of faith in the system.

“I don’t know the ins and outs of government, but if the politicians can’t decide what to do, we should go without a deal,” he said, adding that he would happily live with problems like delays flying in and out of the country. “If one queue is a bit longer than another, that’s fine, we’ll just wait a little longer.”

At last he shrugged. “No one can say what’s going to happen, because no one knows,” he said.