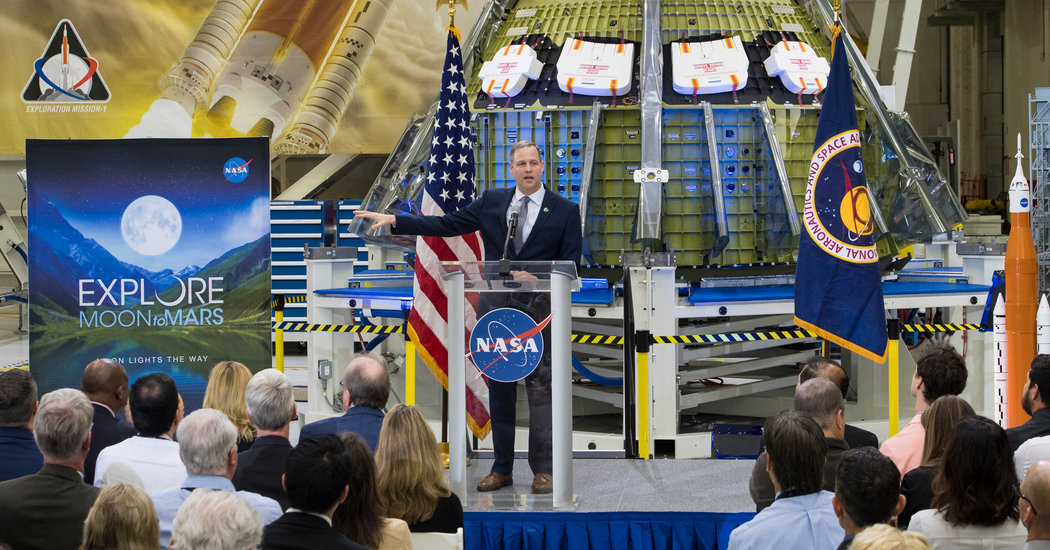 Struggling to get its new giant rocket ready in time for a scheduled launch next year, NASA might just leave it on the ground and turn to commercial alternatives.

“NASA has a history of not meeting launch dates,” said Jim Bridenstine, NASA’s administrator, at a Senate committee hearing on Wednesday, “and I’m trying to change that.”

NASA plans to send its Orion capsule, designed to carry astronauts on deep space missions, on a crewless test trip around the moon next year.

But the schedule for completing the rocket that is to carry Orion — known as the Space Launch System — has slipped repeatedly despite NASA’s spending more than $10 billion on the program so far. Last year, in announcing the latest delay, NASA said that the mission was penciled in for the end of 2019 but even then conceded that June 2020 was a more realistic target date.

[Sign up to get reminders for space and astronomy events on your calendar.]

In October, NASA’s inspector general issued a report that was sharply critical of Boeing, the rocket’s prime contractor.

“Cost increases and schedule delays of core stage development can be traced largely to management, technical, and infrastructure issues driven by Boeing’s poor performance,” the report said. “For example, Boeing officials have consistently underestimated the scope of the work to be performed and thus the size and skills of the work force required.”

On Wednesday, Mr. Bridenstine said that last week it had become clear that the rocket would probably not be ready even by June 2020. He said he had directed managers to explore whether there would be another way to launch.

“The goal is to get back on track,” Mr. Bridenstine said. He said the space agency would make a decision “in the next couple of weeks,” and that it might require additional money from Congress.

The largest rockets currently built by private companies are smaller than the Space Launch System, so if NASA decides on this approach, the payload for the mission would need to be split between two rockets. The Orion capsule and its service module, a component built by the European Space Agency to provide power and propulsion, would ride to orbit on one rocket. A fueled rocket stage for propelling Orion to the moon would go up separately.

The two pieces would then rendezvous and dock in orbit before heading to the moon. Mr. Bridenstine noted that Orion currently lacks the ability to dock with another spacecraft in orbit. “Between now and June of 2020, we would have to make that a reality,” Mr. Bridenstine said.

Senator Roger Wicker, Republican of Mississippi and chairman of the Committee on Commerce, Science and Transportation, noted: “This is 2019.”

A commercially launched mission would allow extended testing of Orion and the service module, one of the main goals, but it would push the first flight of the Space Launch System further into the future.

Mr. Bridenstine did not name which commercial rockets might be used, but the two that are powerful enough are the Delta 4 Heavy from the United Launch Alliance, a joint venture between Boeing and Lockheed Martin, and the Falcon Heavy from SpaceX, the rocket company founded by Elon Musk.

The Orion has been launched once already on top of a Delta 4 Heavy, in 2014, for a crewless test flight, but that did not go to the moon. The Falcon Heavy has only flown on its February 2018 test launch.

At the hearing, Mr. Bridenstine continued to describe the big NASA rocket as a core component of the space agency’s plans. But if the commercial approach works for the test flight, some space watchers wonder why the same strategy would not work for missions carrying astronauts.

NASA may move away from the Space Launch System and use less expensive commercial rockets for other missions as well, including for pieces of the Lunar Gateway, a planned outpost in orbit around the moon, and the launching of the Europa Clipper, a robotic mission to study one of Jupiter’s moons.

In its budget proposal for fiscal year 2020, the Trump administration is also proposing the delay of an upgrade to the second stage of the Space Launch System that Boeing is working on. That is not needed for the early missions but will enable the transport of heavier payloads to space.

Recent reporting on NASA and spaceflight