A League of Their Own, as Only 3 Arab Leaders Attend Summit 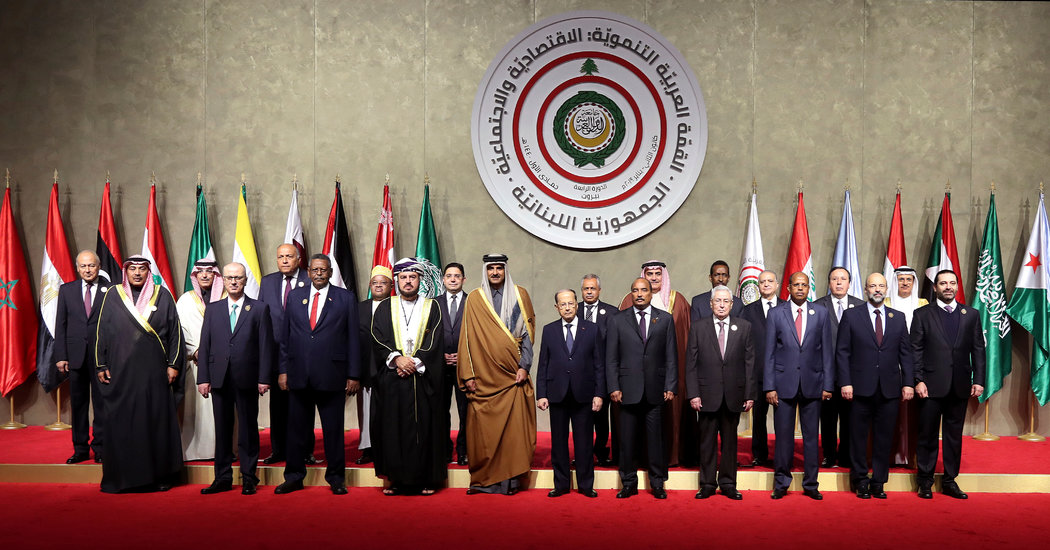 BEIRUT — The eyes of the world were nowhere near Beirut, where the kings and presidents of the Arab world had been ceremoniously summoned to a summit of the Arab League over the weekend and had, in all but two cases, ceremoniously declined.

Government jets disgorged only underlings and minor ministers onto the red carpet that had been rolled out for them at the airport.

Libya was boycotting, and just about everyone was in a fight over whether to invite Syria at all. Nonetheless, the city puffed out its chest, put its downtown on lockdown and hoisted the flags of the 22 member states under a mercifully rainless sky.

The fourth economic and social summit of the Arab League — or most of it, anyway — was hereby called to order.

“We wished for this summit to be an occasion to bring together all the Arabs, leaving no vacant seats,” the host, President Michel Aoun of Lebanon, lamented in a speech that kicked off Sunday’s gathering. “Yet the hurdles were unfortunately stronger.”

As if on cue, the TV cameras panned to an empty dais on which a small Libyan flag was wilting, and an eloquent gap between the Egyptian delegation and the Lebanese one. Members of a Lebanese political party had threatened to physically block the Libyans from leaving the airport if they showed up.

Syria’s empty seat was just across the vast hall, a bone of contention in the form of a large wooden desk — and a reminder that, with a few member states reopening embassies in Damascus in recent months, Syria’s pariah government appeared to be progressing toward rejoining the league.

That, of course, might first require unearthing some kind of Arab League consensus.

Formed at the suggestion of the British during World War II, the league was supposed to strengthen ties among Arab countries from Morocco to Oman, with the Palestinian cause their most important shared mission. It united its members in shaking off colonialism and confronting Israel, helped broker an end to Lebanon’s 15-year civil war and developed a significant Israel-Palestine peace plan.

But by now, enfeebled by regional rivalries and disagreements, the league has acquired an all-too-mockable reputation for dysfunction. Its aged leaders have been known to fall asleep during meetings. In one recent year, one leader mused that the only thing the members had in common was the Arabic language.

In 2016, the league hit what was perhaps a modern low point when Morocco announced that it would not be bothering to host the annual leaders’ summit. It dismissed it as “just another occasion” to “pronounce speeches that give a false impression of unity.” When Mauritania stepped up to host instead, only seven leaders attended.

“It’s constitutionally incapable of addressing the real problems that are facing the Middle East,” said James Gelvin, a professor of Middle Eastern history at the University of California, Los Angeles. “That’s everything from bad governance and political violence to climate change, population growth, bad health care and bad educational systems.”

Matters have not improved much since 2016.

“Half these countries are fighting each other in wars or undermining each other,” said Rami G. Khouri, a Beirut-based political columnist who has covered several Arab League summits.

It is only a slight exaggeration.

In Yemen, Saudi Arabia and its partners in the United Arab Emirates are mired in a war against the Houthis, a rebel group, a conflict that has killed tens of thousands and thrust millions to the edge of famine. (Representatives of Yemen’s Saudi-backed government attended the summit, but the league took no action to address the humanitarian crisis.)

There are hostilities between the Saudis and Emiratis and the Qataris, whom the Saudis and Emiratis have tried to ostracize politically and isolate economically. There is bad blood between Lebanon and Libya. No one has entirely forgotten that Egypt made peace with Israel in 1979, a move seen as such a historic betrayal of the bloc that Egypt was voted out for a decade.

And when it comes to Syria and the several countries that have funded rebel groups taking on President Bashar al-Assad’s government, water is only just beginning to trickle under the bridge.

Soon after the Syrian war broke out, the Arab League suspended Syria’s membership, and it later welcomed representatives from the Syrian opposition. Almost eight years later, Mr. Assad has all but re-clinched control of the country.

The league’s membership has had to wrestle with questions about how to rebuild Syria’s shattered infrastructure and economy — an undertaking that could cost hundreds of billions of dollars — and what to do about the more than five million refugees in Jordan, Lebanon, Turkey and Iraq.

Those questions were always going to be extra-fraught at a summit meeting in Lebanon, where the three major political and religious camps — Christian, Shiite Muslim and Sunni Muslim — have been so deadlocked, in part over Lebanese-Syrian relations, that they have failed to form a government for eight months and counting.

Mr. Assad’s government enjoys the support of Shiite-dominated factions in Lebanon and beyond, and in the weeks before the summit, Lebanon’s Parliament speaker, Nabih Berri, a Shiite, called for the whole event to be postponed until Syria was invited. What was the point of discussing Syrian reconstruction and refugees, Mr. Berri asked, if Syria was absent?

He earned nothing but irritated shushings from Lebanon’s Christian president and Sunni prime minister, who were anxious to present the host country in a good light.

There was not much either the president or prime minister could do, however, about the supporters of Mr. Berri’s party, Amal, who threatened to block the Libyans at the airport if they tried to fly in, and then burned a Libyan flag for good measure.

They were aggrieved about a four-decade-old incident in which a revered Lebanese Shiite leader, Musa al-Sadr, disappeared on a trip to see Libya’s leader, Col. Muammar al-Qaddafi. Mr. Qaddafi was killed in the 2011 Libyan uprising, but Lebanese Shiites say Libya’s current government could do more to investigate Mr. Sadr’s disappearance.

Perhaps understandably, Libya soon announced that it would decline to attend. Then, one by one, the Arab presidents and kings sent their regrets, until only the presidents of Mauritania and Somalia remained on the guest list. Then the Somali leader canceled. (A leaders’ summit is held each year, but the economic and social development conference that Beirut was hosting takes place only periodically.)

When the league’s assistant secretary-general, Hussam Zaki, landed in Beirut to oversee preparations for the summit, he had a gravity-defying message: “The summit is on schedule,” he said. “The internal political problems in Lebanon have nothing to do with the Arab League.”

Maybe not, but many Lebanese, from the president on down, had hoped that the league would help fix Lebanon’s problems.

The Lebanese wanted Lebanon’s Syrian refugees to go home. They wanted investment in Lebanon’s gasping economy. They definitely did not want the military to shut down half the airport highway as delegations arrived on Saturday, leaving the road so congested that some people were reduced to getting out of their cars and dragging their suitcases the last half-mile to the terminal.

“This summit cost Lebanon millions of dollars — what are we going to get from it?” Mohamed Al Mawla, an athletic trainer from Beirut, said on Saturday. “It’s going to be ink on paper. Nothing will happen.”

In the end, the Arab leaders left without addressing the major issues at hand, promising merely to establish a regional fund to invest in technology and to support the youth of the Middle East.

But if the meeting did not provide much in the way of solutions, it was rich in drama. As the oratory flowed on Sunday, a rumor spread that the emir of Qatar, a major regional figure, had not only flown in on his private plane that morning but also announced that he was going to cover the entire $10 million cost of the summit and throw Lebanon an extra $1 billion — news tailor made to perk up every gloomy skeptic.

Soon came the cold water and the official denials: There had been no such princely largess, and there was no emir in sight, the emir having left after a brief stop in Beirut on Sunday morning. Lebanon would pay. The flags came down, the delegates went home; the circumstance was over and the pomp, until the next summit, was put away.