A City Put Up Candle-Like Christmas Lights. ‘Some People See Other Things.’ 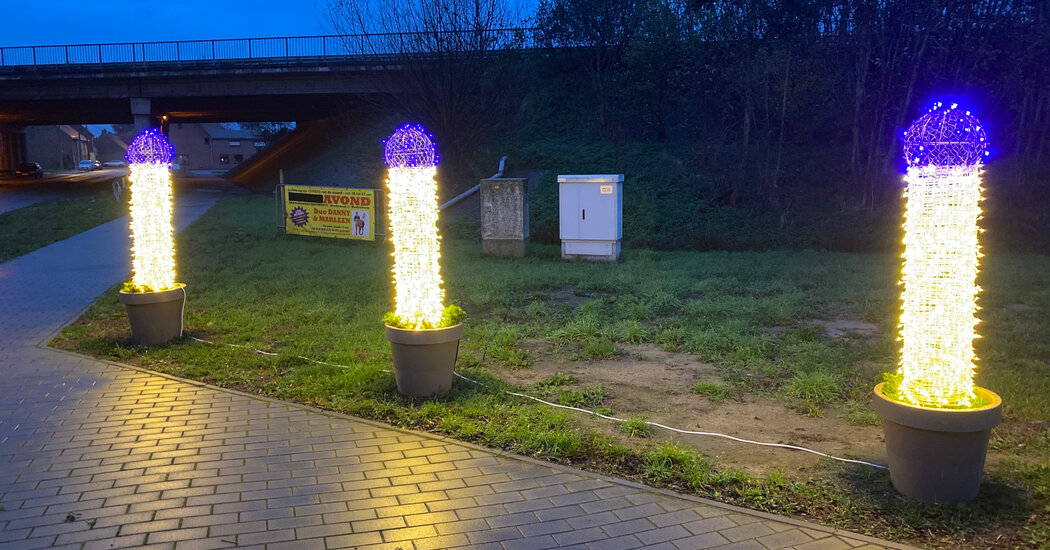 The Belgian city of Oudenburg was getting into the Christmas spirit, and it prepared to unveil a lights display on scores of columns set up to look like festive candles scattered around one of its districts.

But when the switch was flipped, something else appeared: instead of candles, the 80 columns looked more like a certain part of the male anatomy topped with blue lights, illuminating bus stops, green spaces and even the surroundings of a church.

The display in Oudenburg, 10 miles west of Bruges, was quickly noticed with amusement by local residents, and then picked up gleefully by Belgian and international news media.

The mayor of Oudenburg, Anthony Dumarey, said the city was making the best of the situation, and he hoped that the display, and all the attention it had received, would cheer up local residents dispirited by the coronavirus pandemic.

“We had the idea of installing candle-shaped lights,” Mr. Dumarey said by telephone on Friday. “Some people see other things.” He said that the display would stay.

By day, the almost six-foot-high installations looked like ordinary columns draped with strings of lights. But lit up at night, they took on a completely new aspect, which Mr. Dumarey said took him by surprise.

“When the lights are not on, I swear, you cannot see it.”

With more than 15,000 deaths from Covid-19, Belgium stands as the country with the highest death rate per capita in the world, according to a New York Times database. The country’s authorities reinstated nationwide restrictions earlier this month, with all nonessential shops closed, working from home made mandatory and visits between households forbidden.

“I’m very happy to put a smile on people’s face, and to bring light in the darkness,” Mr. Dumarey said.

The lights were installed in Ettelgem, which is part of the municipality of Oudenburg, on Monday. The rest of the city has pyramids as Christmas decorations, Mr. Dumarey said, adding that residents had reacted well to the new lights.

“We are unique,” two Oudenburg residents, Luc and Ann-Marie Van Nieuwenhuyse, wrote in a comment on a picture posted by Mr. Dumarey on Facebook, showing the mayor standing next to one of the lights. (Not the pyramidal ones.)

In 2017, the Italian town of Civitanova Marche achieved similar fame after dressing palm trees with Christmas lights. They dwarf Oudenburg’s.