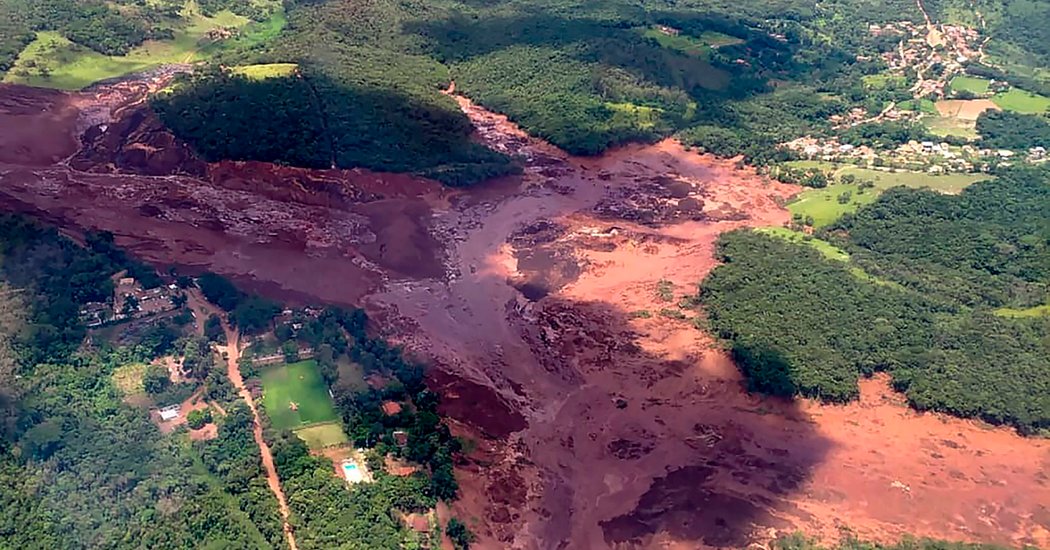 SÃO PAULO, Brazil — A mining dam burst in southeastern Brazil on Friday, killing at least seven people, flooding nearby homes, submerging cars and buses under a river of sludge and leaving 200 people missing, according to the rescue workers searching for them.

The accident, in the town of Brumadinho, comes just three years after a dam burst in Mariana, 75 miles away, killing 19 people and causing one of the worst environmental disasters in Brazil’s history.

The Brumadinho dam ruptured in the early afternoon on Friday, spilling murky water filled with mining waste into an administrative area where employees were working and a neighborhood where they lived. The dam is owned by the iron ore mining giant Vale S.A., which also was a joint owner of the dam that burst in Mariana.

The press office for the Civil Defense service said search and rescue efforts had been suspended after nightfall, but confirmed that seven people were killed and 17 people were injured and rescued. There were more than 50 firefighters on location with six helicopters and the search for approximately 200 would continue on Saturday.

The C.E.O. of Vale, Fabio Schvartsman, called the accident a “human tragedy.”

“The majority of those affected are our own employees. At the time of the accident there were approximately 300 employees,” he said at a news conference. “We don’t know how many were injured because everything was buried.”

He added that the dam had been inactive for the last three years and was not receiving mining waste.

Brazilian television broadcast images of a woman waist-deep in mud being rescued by a helicopter, and aerial video of huge rivers of mud rushing over roads and burying homes and trees.

Workers told local news media that many employees were in the company cafeteria when a wave of mud crashed down into it.

“It destroyed everything. Everything, everything,” a man says in an amateur video posted to social media.

“The restaurant, everyone was eating. It was all destroyed. Just look,” he said, showing an expanse of mud.

President Jair Bolsonaro announced he and the defense minister would fly to the disaster zone on Saturday morning, and had established a crisis cabinet in the meantime.

“Our main concern at this moment is attending to potential victims of this grave tragedy,” he said on Twitter.

It was not immediately clear what caused the accident. Hours after the dam burst, panicked residents told local news media that they still hadn’t been able to obtain information from Vale about family members who work for the company.

Vale drew criticism from environmental activists and from others who accused the company of repeating the errors that led to the disaster at the Mariano dam, which was owned by Samarco, a joint venture between Vale and the British-Australian mining company B.H.P.

“This new disaster with the ore tailings dam, this time in Brumadinho, is a sad consequence of the lessons not learned by the Brazilian government and the mining companies responsible for the tragedy with Samarco,” Nilo D’Ávila, the campaign director for Greenpeace Brazil, said in a statement.

Mr. Schvartsman, the Vale C.E.O., said he felt the environmental damage was not as severe as the loss of lives. “The human tragedy will be much greater,” he said.

Brumadinho, a town of 38,000, is best known for the Inhotim contemporary art and botanical gardens complex, founded there in 2004. The complex was not damaged by the flooding, but it was evacuated and closed to the public shortly after the dam burst.