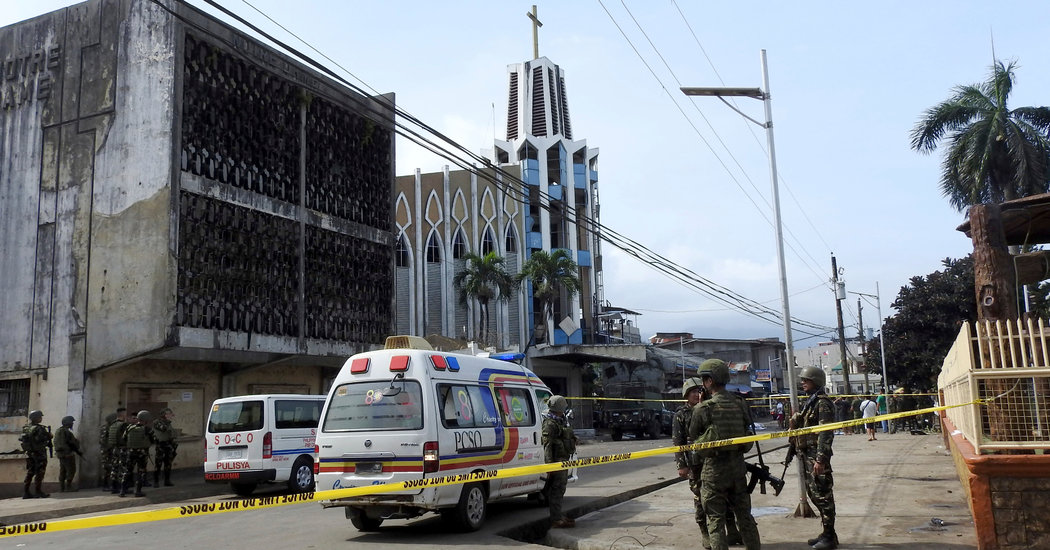 MANILA — Five soldiers and three members of Abu Sayyaf, a militant group linked to the Islamic State, were killed in a gun battle on Saturday on the southern Philippine island of Jolo, six days after a church bombing linked to the group left 22 dead, the military said.

The fighting occurred in the jungles around the town of Patikul on Jolo, where the soldiers have been on the trail of an Abu Sayyaf unit blamed for an attack on the Cathedral of Our Lady of Mount Carmel last Sunday.

Twin explosions rocked Mount Carmel Cathedral, in downtown Jolo, as worshipers celebrated Mass. After the initial death toll of 21, a 68-year-old woman who was among the 100 or so others wounded died of her injuries on Friday.

President Rodrigo Duterte and the military blamed the church attack on “suicide bombers” deployed by Abu Sayyaf working in concert with the Islamic State group.

Security officials have said that early indications point to foreign bombers, though they have provided no conclusive evidence so far.

Abu Sayyaf, which is blamed for the worst terrorist attacks since the 1990s, is known to have links with foreign jihadists.

On Friday, Jolo’s provincial police chief, Pablo Labra, said that, based on the accounts of witnesses and body parts recovered by investigators from the blast site, the church had been attacked by a female suicide bomber.

“They said the woman was acting suspicious. Churchgoers know each other. They noticed the woman because she was uneasy,” Mr. Labra said. He added, “She was sitting at the blast site, and no one knows her.”

In the huge gunfight before noon Saturday, according to the military, troops under the Fifth Scout Ranger Battalion engaged about 100 Abu Sayyaf fighters under Hatib Hajan Sawadjaan in Patikul.

Five other soldiers and at least 15 Abu Sayyaf fighters were wounded, according to the military.

A regional military spokesman, Col. Gerry Besana, said the Abu Sayyaf faction in the gun battle had been targeted in an earlier airstrike by the military.

“These Abu Sayyaf members encountered by troops are those trying to flee the operation,” he said. “The firefight lasted for nearly two hours.”

In 2017, an Abu Sayyaf commander, Isnilon Hapilon, who had pledged allegiance to the Islamic State, led a group of fighters from Southeast Asia and the Middle East in taking over the southern Philippine city of Marawi.

The five-month battle to free Marawi left 1,200 people dead — most of them enemy fighters — in what was then the toughest challenge to face the three-year-old government of Mr. Duterte.

While Mr. Hapilon and other key leaders of the Marawi siege were killed, Mr. Duterte kept the entire south under tight military control, citing continuing threats from remnants of the fighters who had fought in Marawi.

Days after the Jolo church bombing, a grenade exploded at a mosque in nearby Zamboanga city, leaving two religious leaders dead, in what many feared was a reprisal attack that could lead to wider sectarian violence.