KUKAS, Latvia — Back in Soviet times, Yuris Taskovs snitched to the K.G.B. about a neighbor watching German pornography and betrayed hundreds of anti-Kremlin activists. So he and others like him knew that if the secret police files from Latvia were ever made public, which they finally were last month, their nefarious activities would be revealed.

Not that Mr. Taskovs is particularly concerned. “For 12 years, I worked for them with great enthusiasm,” the 63-year-old Latvian said of his time as an informant for the K.G.B. before the 1991 collapse of the Soviet Union.

For many others, however, the appearance of their names, code names and dates of recruitment in the recently released K.G.B. documents has come as a traumatic surprise.

“I am in shock. I had no idea,” said Rolands Tjarve, the former director of Latvia’s post-independence national broadcaster and now a professor at the University of Latvia. Insisting that he never served as an informant — or what the K.G.B. called in the files an “agent” — he said he would go to court to clear his name.

Latvia, one of three Baltic nations reborn as independent states in 1991, has been arguing for nearly three decades over what to do with the so-called Cheka bags, sacks and briefcases stuffed with secret files left behind by the K.G.B., the Soviet secret police agency originally known as the Cheka.

Other former Soviet lands, like Lithuania, Estonia and Georgia, found some K.G.B. files after they broke free of Moscow. Germany quickly opened up files left by East Germany’s Stasi secret police after reunification in 1990.

But only Latvia was left with a systematic index listing the real and code names of more than 4,000 purported agents, along with a large digital archive of K.G.B. activities known as Delta.

So instead of clearing the air, a vote by Latvia’s Parliament that the contents of the bags be posted online has confronted the tiny Baltic nation with an unsettling question. Is it slowly coming to terms with the fact that its people were not just victims of Soviet oppression but, in some cases, also eager collaborators? Or has it fallen prey to a devious plot by the K.G.B. to sow disarray among the country’s post-independence elites with fabricated records of betrayal?

The latter view is widely held by those who have been outed as agents but insist they had never knowingly worked for the K.G.B. Instead, they say, they have been framed by Soviet secret police officers who padded their roster of informants, either to impress superiors or plant a slowly ticking time bomb under Latvia’s future as an independent state.

“It is impossible that the K.G.B. would leave behind a real list of agents in what it considered enemy territory,” Mr. Tjarve said. The files, he said, must have been doctored and deliberately left as a “special gift” to Latvia, now a member of NATO, as part of a “disinformation operation” by retreating Soviet officers.

Latvians found “in the bags,” the term of art for people who have turned up in the files, include a two-time former prime minister, the chief justice of the Supreme Court, a onetime foreign minister, leaders of the Catholic and Orthodox churches, three post-independence rectors of the University of Latvia, celebrated filmmakers and assorted television stars and writers. Some names leaked years ago or appeared in a Latvian documentary, “Lustrum,” released late last year.

But the publication of the full list has still caused dismay.

Mara Sprudja, director of the national archive, which began posting the files online in December and will release another batch in May, said she was particularly shocked, for example, to see the name of Andres Slapins, a Latvian cameraman, shot and killed by Soviet troops who attacked pro-independence activists in Riga, the capital, in 1991. 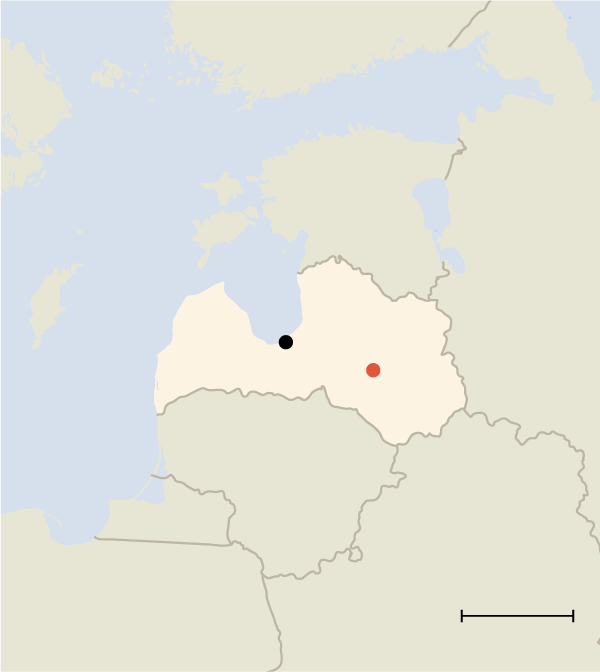 Releasing the names of people who faced terrible choices “in a different time and a different place,” she added, “has just created more confusion,” not cathartic clarity. It is not clear, she added, what the purported agents did for the K.G.B., and “nobody today really knows what they would have done themselves in such a situation.”

As odd as some of the names that appear are those that do not, like Janis Rokpelnis, a well-known Latvian poet who confessed publicly in 2017 to having worked for the K.G.B.

When the spy agency left Latvia, in August 1991, it inexplicably left piles of documents and a partly destroyed Delta electronic database at its sprawling headquarters, known as the Corner House, in central Riga.

Two separate indexes of what the K.G.B. classified as agents — one arranged alphabetically, the other by department — were found in two sealed sacks and two briefcases. These were moved in November 1991 to a secure room in the Latvian Parliament and transferred in 1993 for safekeeping and study to a newly established Center for the Documentation of the Consequences of Totalitarianism.

Latvia kept the files locked, restricting access to a few scholars sworn to secrecy and officers of the security services, which used the files for security checks on officials and politicians.

Indulis Zalite, the former longtime director of the documentation center and now a consultant there, is one of just a few people who has long known the names “in the bags.” He said he doubted the files were left as an ingenious act of sabotage by the departing Soviets.

“Everything was in chaos in 1991,” he said. “They could not organize a deep plot. They were too disorganized.”

All the same, he cautioned that the documents released so far present “only part of a very big puzzle,” as they give names but no details of what the purported informants did for their handlers. This, he added, reflects a “fake reality” as seen through the eyes of K.G.B. officers who liked to boast of their success penetrating all walks of life.

Long opposed to releasing the contents of the Cheka bags, he said their publication will make it much more difficult for people who had collaborated to talk honestly about what they did and why.

“As soon as someone is exposed publicly as an ‘enemy,’ it is not easy for them to tell the truth,” he said.

So far, among the few people ready to divulge what they did and why are the poet, Mr. Rokpelnis, whose name mysteriously does not appear “in the bags,” and Mr. Taskovs, the 63-year-old former informant identified in the files as Agent Number 18471, code named “Amber.”

Mr. Taskovs, recruited in 1979, became a Christian in 2001 after a health scare and has tried since to atone for his past collaboration. He confessed to his priest and wife about his informant work.

Speaking in an interview last week at his house in Kukas, a small village in eastern Latvia, he recounted how he had been bullied as a child at school and seen his father humiliated by Soviet police officers. By offering to work for the K.G.B., he said, “I had this secret power and protection.”

Mr. Taskovs said he had now found security in his Christian faith, so can face up to his past collaboration with a system he described as “entirely wrong.” But he said it “is absolutely stupid to throw all these names out on the street” by releasing the K.G.B. files because most people “don’t like to talk about betrayal. They try to escape.”

Most of what he told his case officer in the nearby town of Jekabpils, he said, “was just rubbish” and hurt nobody, aside from his neighbor, jailed for a year for viewing pornography.

He said the K.G.B. already knew most of what he had put in his hundreds of written reports, which included details of a semi-clandestine environmental group that helped spearhead Latvia’s pro-independence movement in the 1980s. Good with his hands, he offered to make identity cards for the group’s 3,000 members — and then gave copies of each card to the K.G.B.

“I told them absolutely everything. Names, places, everything,” he said.

Most of those “in the bags,” however, are like Ojars Rubenis, the former host of a popular Soviet-era television show, “Labvakar.” Long admired for helping promote Latvian independence, he has now been identified as a Soviet-era agent, along with his two co-hosts of the show.

“I am not guilty,” Mr. Rubenis snapped when reached by telephone. Noting that relatives had been sent to Siberia by the Soviet authorities, he asked, “Why would I work for the K.G.B.?” He declined to comment further.

When the files were posted online last month, Vita Zelce, a historian at the University of Latvia, spent all night checking whether anyone she knew had been listed as an informant.

“I was so nervous and so angry,” she said, recalling how she had found the name of an old primary schoolteacher, whom she had always considered a “normal, friendly man,” and a distant relative with mental problems.

“If these people were really agents, the K.G.B. was a joke,” Ms. Zelce said. “What are these files? A real historical record or a strange Soviet disinformation operation? We just don’t know.”

Deciding who really did what, however, depends on access to documents stored in Moscow, which has a full archive of the Latvian K.G.B.’s reports and lists of informants.

“Unfortunately,” said Mr. Zalite of the documentation center, “there is no way to get at that for the moment.”

Lidija Lasmane, a 93-year-old veteran of Latvia’s Soviet-era dissident movement, cheered the release of the files, something she has been demanding for decades. But with many of her own generation now dead, she says it has come much too late either to serve historical truth or settle what she described as a fundamental moral question: “How does a perfectly normal person become a beast ready to betray their friends, their family and their country?”

She said it was true, as many of those so far exposed as K.G.B. collaborators have argued, that the Soviet system put them under terrible pressure, threatening careers and relatives with ruin if they did not cooperate.

“But every individual has a choice in the end,” added Ms. Lasmane, who repeatedly chose to defy the Soviet authorities and, as a result, was sent three times to Soviet prison camps, including one in Vorkuta, a particularly forbidding outpost of the Gulag archipelago.

Raised in a deeply religious Baptist family, she said her faith meant that any collaboration with the K.G.B. had never been an option.

“I knew from childhood that there is God and also the Devil. For me, there was never a real choice about what to do,” she said.