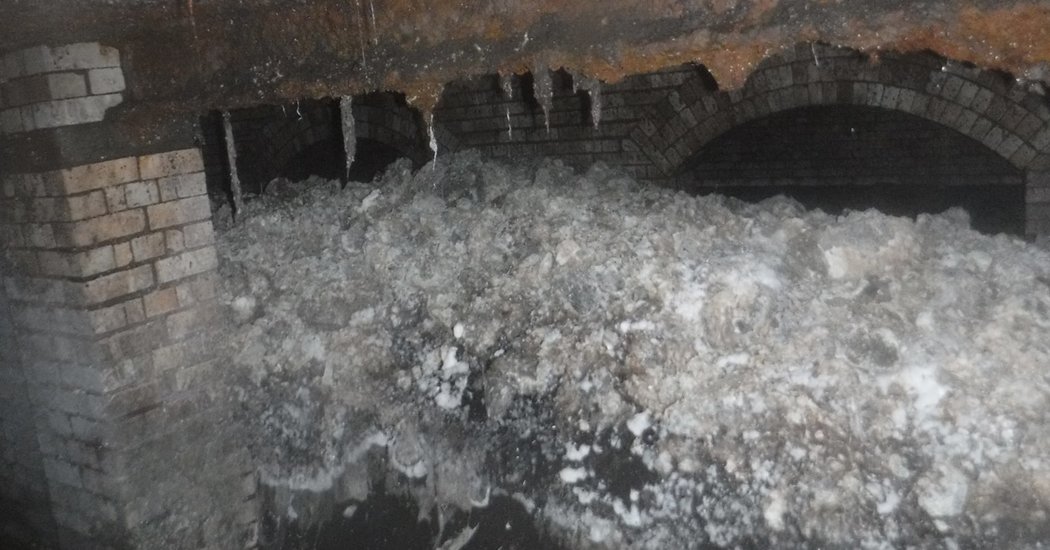 LONDON — The waterfront of Sidmouth, a sleepy coastal town in southwestern England, looks serene even on a winter’s afternoon. But a monster lurks beneath the calm: a mass of fat, oil and wet wipes extending for at least 210 feet.

Known as fatbergs, such greasy, compact masses are an established urban peril. The Museum of London holds a sample of an 800-foot specimen that blocked a sewer under the capital’s East End in 2017, and New York has long battled similar agglomerations.

Sidmouth, however, has only about 13,000 permanent residents, and its fatberg was discovered in a routine check under The Esplanade, a picturesque seafront road full of hotels and restaurants.

“It is the largest discovered in our service history and will take our sewer team around eight weeks to dissect this monster in exceptionally challenging work conditions,” said Andrew Roantree, director of wastewater at South West Water, the company that manages the sewers in Sidmouth and across 4,300 square miles of England, including the cities of Exeter and Plymouth.

The Sidmouth fatberg is longer than the Leaning Tower of Pisa is tall. A spokeswoman for the company said that it could have been growing for up to three years, undiscovered because it had not caused disruption in the wider sewage network.

In a statement that revealed the fatberg’s existence on Tuesday, Mr. Roantree said it showed that waste problems were not just an issue for cities, but could be seen “right here in our coastal towns.”

But a company spokeswoman also gave several reasons The Esplanade might have been particularly hospitable to a fatberg.

Sidmouth hosts an influx of tourists every summer, she said, many of whom seek out fish and chips — traditionally deep-fried — in restaurants and shops with a sea view.

She added that the sewer beneath The Esplanade was large, allowing a fatberg to gather bulk without causing the sort of problems that would lead to it being found and destroyed.

As news of this unwanted gift for the new year traveled on social media, some Sidmouth residents spoke of an unpleasant odor that was coming from the town’s drains.

“Wonder how the Fatberg is doing today — did wonder what the smell was on Sunday as I walked along the front,” Paul Denning wrote in a Facebook post.

“The drains in town have smelt for ages,” Susan Perryman commented, while Wendy Brooks, another Sidmouth resident, added that “the beach by Bedford Steps smells of sewage.”

Stuart Hughes, a Sidmouth council member who had previously expressed concerns about the town’s sewage pumping station, according to an article in The Sidmouth Herald, received news of the fatberg with concern.

“This isn’t the first time that something like this has happened,” Mr. Hughes said in an email on Tuesday, adding that “the antiquated sewage system and pipes” made this a very worrying find.

“Whilst locals and visitors are embracing the issues surrounding use of plastics, they now need to be educated in not pouring fats and oils down the drain,” he said.

Mr. Roantree of South West Water had a similar message.